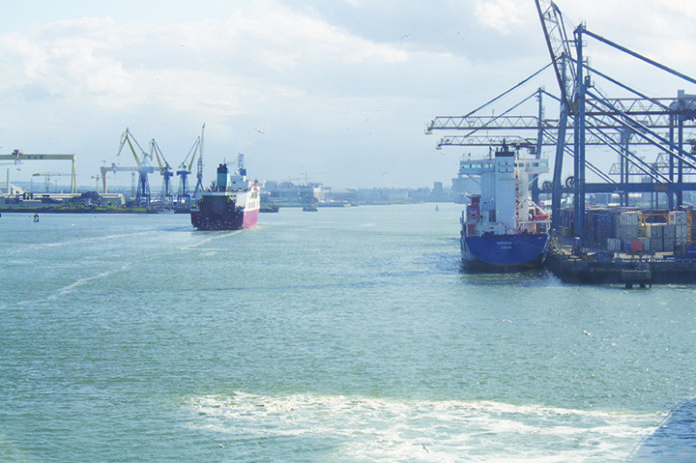 IT’S a sight that I love. Standing on the deck of a Stena Fast Ferry, as she makes her steady way up Belfast Lough on the last lap of the quick crossing from Cairnryan, it’s always exciting to look up the lough. Ireland lies ahead, and it’s great to be back home.

For me, it’s usually off the boat, on to the A2 motorway to Antrim and over the Glenshane Pass to Derry, to reach Donegal as quickly as possible, while for others it’s down the Westlink and off south to Dublin.

But, no matter where you’re going—and, for many it’s a trip to Belfast itself to enjoy the city’s many attractions, ranging from the world-famous Titanic exhibition to a black taxi tour of the Troubles’ murals, or to the city’s many shops and restaurants—that sail up Belfast Lough (above) is a curtain-raiser to what’s to come.

There’s always a feeling that the ferry has entered calmer waters, as Copland Island is passed to starboard, and the Gobbins cliff path can be seen after Whitehead to port, while, the chimney of Kilroot power station, clearly visible from Scotland, on a clear day, comes into closer focus.

If you’re lucky enough you might just catch a plume of white steam as a heritage train, running from the Railway Preservation Society of Ireland’s base at Whitehead, heads towards Belfast, hugging the coast, for there’s plenty to see from the ship’s deck as it nears journey’s end. It’s just a matter of training your eyes on either side of the lough to catch the action.

As the last diners clear their plates in the cafeteria, and as the truckers begin to look restless, keen to be off and away with their loads, Belfast Lough starts to narrow, and you can make out the Ulster Folk and Transport Museum at Cultra to starboard, and Carrickfergus Castle, the very spot where King William himself landed in 1690 his way to the Battle of the Boyne to port. Maybe that’s something you’d rather not know, but it’s an undeniable part of the castle’s history, and Belfast Lough has played its part in Irish history ever since.

View from the deck
As you pass today’s shipping going to and from Belfast’s still-busy docks, you’ll inevitably cast your mind back to RMS Titanic, which sailed down the channel on April 2, 1912, leaving its Harland & Wolff birthplace to take up its station at Southampton for its ill-fated maiden voyage.

That came to mind last time I sailed up the lough recently, for an excited family group were on their way—courtesy of a popular Stenaline day trip package—to visit the Titanic exhibition, and the wee boy was asking his father anxiously who had built the ferry he was on!

But he needn’t have worried, it wasn’t Harland & Wolff. As we sailed on smoothly towards the terminal, car drivers and passengers waited for the announcement to go down to the car deck, and foot passengers began to queue up at the passenger exit, keen to be off and away by connecting bus into Belfast to enjoy the delights of the city.

But, for me, I always linger on deck as long as possible as Belfast itself comes into view. For, there, in front of you, is the channel of the River Lagan that made Belfast great, with the famous Harland & Wolff gantry cranes—known as Samson and Goliath—dominating the skyline, recalling the city’s proud shipbuilding heritage.

You’ll also see planes flying into George Best City Airport, just before the captain announces that we’ll be berthing and wishes us all a safe and pleasant onward journey, while, to the west, there’s the Cave Hill and the motorway climbing up to Glengormley, beckoning towards Derry and destination Donegal.

All of this heightens your sense of anticipation, as all Ireland, that place that you long to be in for as long as possible, every time you visit as a returning member of the diaspora, lies ahead of you, and you’re keen to be off.

I’ve arrived off the Stenaline ferry numerous times in Belfast. In the days of the HSS, high-speed ferry, you could leave Stranraer on the early sailing, arrive in Belfast just 90 minutes later, jump in a taxi, catch the Enterprise train at Belfast Central at 8am, and be in Dublin by 10am, with plenty of time to do a couple of features in the Fair City before making the return journey the same day.

I’ve also done day jobs in Belfast itself, covering stories on the Titanic exhibition, SS Nomadic, Titanic tender ship, and the only White Star vessel in existence; World War I cruiser, HMS Caroline, which has been restored in Belfast; the Ulster Folk and Transport Museum at Cultra, and, of course, the famous murals of the Falls and the Shankill, and so much more besides.

My wife and I have arrived off the ferry with our bikes to cycle to Donegal via the Antrim coast, or to head down by bike to the Mournes, or, much more often, by car, for an essential summer foray to the ancestral homeland in Donegal. Belfast is truly the gateway to Ireland.

But, don’t forget to be up-on-deck as the boat enters Belfast Lough. Let the sense of anticipation build up slowly and savour the sights on both sides. Enjoy, too, the atmosphere on board as the sense of arrival heightens. For some passengers, it’s the anticipation of having sailed the short voyage that takes us home; for others, perhaps, first time visitors to Ireland, it’s a sense of adventure, not forgetting a wild crowd of girls from Stranraer, who couldn’t wait to get at the Belfast shops in the city nearest to their home town, to spend, spend and spend!

Longing
I’d have to admit that, on the way back from Ireland, I always linger, sadly, to watch Ireland slip away into the distance, yet again, as the lights of Belfast merge into one mass, and when it’s time to go below decks to raise your spirits with a tasty meal.

And, from the cafeteria windows, you anxiously look out to catch that last sight of Ireland as the Antrim coast extends away north, drawing an imaginary line in your head, across county, to reach Donegal, and to convince yourself that it’s not that far away.

That’s your last view of Ireland, until the next time, of course, when you sail up Belfast Lough again, enthusiasm as great as ever with that tingling sense of anticipation of being back in Ireland. And, having written this, I’ll just have to get online to the Stenaline again. It’s time, once again, to book the summer trip on the tide that takes us home. See you up on deck on the way down the lough. 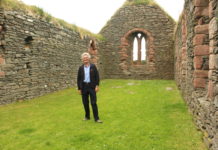 Walking in the footsteps of saints 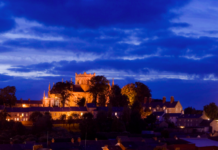 Head to Armagh and enjoy yourself in the Orchard County 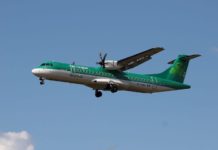