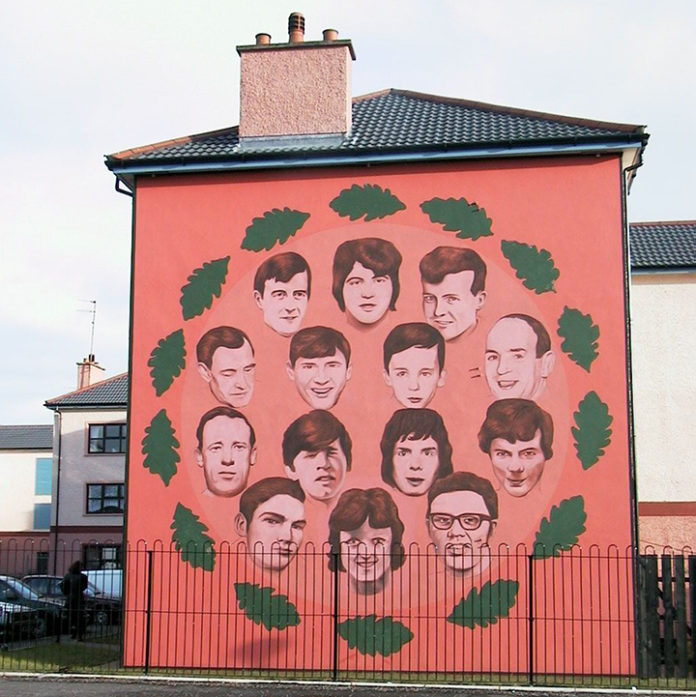 IN 2019 Northern Ireland’s Public Prosecution Service announced that one veteran, known as Soldier F, would face charges over the Bloody Sunday massacre. That infamous day in January 1972 was one of many flashpoints, alongside internment, the Falls Curfew, and the Burning of Bombay Street, which proved the catalyst for prolonged violence and the near 30 years of conflict that followed.

14 innocent civilians (above), taking part in a Civil Rights march, were killed by the Royal Parachute Regiment on Bloody Sunday. A further 15 marchers were wounded. It took decades to get so much as an apology from the British Government and no convictions have followed.

The news of Soldier F standing trial was a welcome step for the victim’s families. However, some of those families requested a review of the Public Prosecution Service’s decision to only charge Soldier F, in March 2019. They expressed disappointment at the outcome of last year’s judicial review, which confirmed that Soldier F will remain the only veteran to face prosecution.

Sinn Féin Vice-President, Michelle O’Neill, expressed her dismay on Twitter. In a post to the social media platform, at that time she said: “Today’s ruling on Bloody Sunday is hugely disappointing. The families have been campaigning tirelessly for almost 50 years for justice. The denial of justice is unacceptable and must end. We will continue to support the Bloody Sunday families in their pursuit of truth and justice.”

In response to her tweet, Unionists questioned where the justice is for the victims of IRA attacks on the Shankill—those of the Bayardo Bar, Four Step Inn and Balmoral Furniture Store and so on. Therein lies the problem of legacy issues and reconciliation. It is an area of the Good Friday Agreement (GFA) without clarity or full implementation.

There are numerous cohorts affected by the most recent period of conflict on the island of Ireland. In terms of combatants, there are Republican paramilitaries, Loyalist paramilitaries, the British Military and the Royal Ulster Constabulary. Each faction was both perpetrator and victim to varying degrees. Aside from the combatants, there were also numerous civilian casualties from all communities.

Seeking truth and justice
In my opinion, there should be no hierarchy of victims and each life should be valued equally. Yet, whilst all victims are entitled to the truth, that is not going to be forthcoming if the threat of jail time looms over the heads of those responsible.

Families of the Bloody Sunday victims have every right to demand that those soldiers responsible for gunning down their innocent children, mothers and fathers are punished. However, a public acknowledgement of who pulled the triggers will likely never come about unless there is immunity from prosecution.

For some, getting the truth, finding out who the responsible individuals were, and making that truth public is good enough. Offering immunity would enable that to happen much more frequently. Indeed, one could argue that if prisoners were allowed to walk free under the terms of the GFA, then that same privilege should be afforded to those whose crimes are discovered after the peace settlement, and to those from the security services. It may be a bitter pill for victims to swallow, but it was something that many in similar positions had to accept when prisoners were released in 1998.

In contrast to those points, there are many families for whom truth and acknowledgement is not enough. They want justice for the people they lost. Previous prisoner releases are not their problem, and at least those released prisoners did actually see the inside of a cell for some period of time. They want their family member’s killer to be behind bars, particularly when that killer was a member of the state forces, who were meant to be disciplined adherents to legal guidelines, unlike a civilian paramilitary member or terrorist as some may be described. They are well within their rights to demand such action. After all, what kind of society should allow murderers, particularly from government institutions, to walk free?

It’s often said that there are many different versions of the truth. I don’t believe this. Rather, there is an objective truth, but different narratives surrounding that truth based on personal and contextual experience. For example: it is a fact that the Northern Nationalist population suffered discrimination in various forms after partition. Against that backdrop, when Civil Rights marches were attacked and Bombay Street was burned, many Republicans would feel that the use of arms was a last resort and an action that was thus morally justified. The armed actions by opposing paramilitaries would then be viewed as nothing more than sectarian murder and an attempt to further persecute the Nationalist community.

On the other hand, someone from the other side of the peace wall may feel that despite the events leading to the formation of the Provisional IRA, bombings and shootings by the group were not only an immoral and disproportionate response, but perhaps motivated by another reason. I have heard Unionists state that regardless of the context surrounding the Republican movement’s larger scale use of arms, they viewed the militant Republican groups as little more than sectarian murderers, who were wreaking havoc on their people. As a result, these Unionists felt that the likes of the Ulster Volunteer Force were defenders of their community and were morally justified in using arms themselves.

A third dynamic is those who don’t espouse violence and instead support constitutional action. These individuals may have a position on the ‘Irish question,’ or perhaps don’t care about politics, but, overall, they long for peace and morally disagree with using violence under any circumstances. Their view is often much simpler, brandishing all people who took/take up arms as a terrorist—including the security forces due to their actions at many times.

So, there you have three prime examples of different narratives and moral positions, based around an objective truth. The problem with this is that those who killed in the conflict may have felt justified in doing so, albeit reluctantly—unless they are a psychopath. Indeed, one might view their actions as a sad reality of war and a necessity to defend their community or country, rather than a crime. Consequently, these individuals may not have such an enthusiasm to come forward with the truth or an apology.

The final component of the large elephant in the room that I referred to earlier is fear. In this sense, I don’t mean fear of imprisonment. Instead, I mean fear of being brandished a tout and perhaps facing retribution for that. It’s important to note that the conflict created a society of ‘whatever you say, say nothing’ and many events occurred with the involvement of more than one individual. To compromise the identity of others involved, or for soldiers to make military information and government tactics public and so on, may divulge too much information, even in a post-conflict era. We all know what the horrific punishments for informing or compromising national security can be.

The way forward?
So where do we go from here? It’s an impossible situation. One that the politicians and governments haven’t tackled, but I’ll leave that to more politically capable minds, and to those who are directly affected by the horrors of the past. I’m a mere outsider, born and raised in another country, who has been fortunate enough to never have had the horrors of conflict visited upon me. It wouldn’t be fair for me to decide the correct course of action. Although, for what it’s worth, I do think that so many have suffered, and the past can’t be undone. Thus, to move forward and create a better future, there has to be a way of reluctantly drawing a line under yesterday’s pain to focus on tomorrow’s opportunity.

That’s not to say that people should give up on their political aspirations. Considering that I don’t live on the island, I may have a cheek to say this, but as an English-born member of the Irish diaspora, I identify as a United Irelander. I long to see the sovereign territory of the 32 County Irish nation re-instated as I believe that the six counties in the North-East rightfully belong to Ireland. That may be an emotional position, but I too believe that Irish unity makes social and economic sense, particularly in terms of increased island-wide services and EU trade.

Yet above all, the key to life is happiness and regardless of the constitutional position of Ireland, there cannot be true happiness or a normal society unless there is reconciliation and respect. It is not right to live with peace walls dividing neighbours. With that in mind, I personally would like to see the creation of a new independent All-Ireland Republic, which is inclusive, preserves Gaelic culture, but also embraces the culture of the significant minority of British identifying people across the island. The popular support and institutions are now there to achieve that through peaceful politics without any more suffering.

It’s time to get ahead of the curve in light of demographic changes. A border poll to unite Ireland can be won if there is a comprehensive plan and a blueprint created. The obvious starting point is to address flags, anthems and symbols. These things really don’t matter and should be agreeable with mature discussion. Then there must be consideration for how pensions will be paid, including to those who have served in British public services such as the military, what healthcare system will be implemented to make it accessible and effective for all and which legislative measures will be taken to ensure protection of identity and so on.

It would be great to finally see a free Ireland, which serves all of its citizens well and keeps all cultures alive. Again it’s over to the politicians for that.