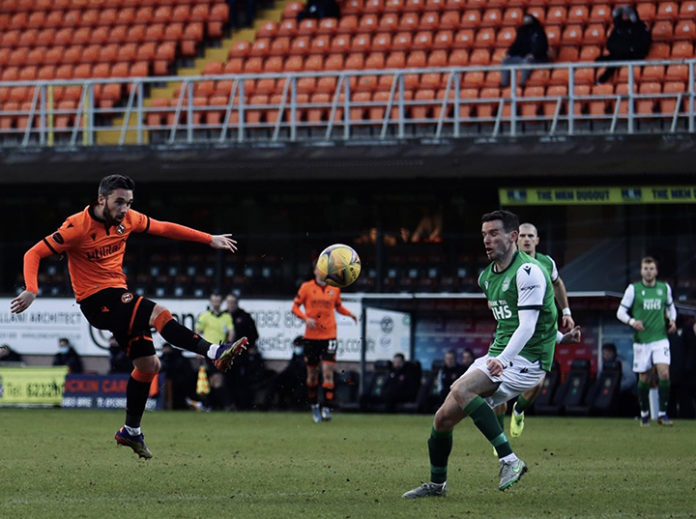 IT’S BEEN worrying times of late at Dundee United with Micky Mellon’s side slipping down to seventh in the Scottish Premiership after two consecutive home defeats.

United’s last outing saw a 2-0 defeat at the hands of Hibs (above) and was easy pickings for the Edinburgh side who were value for money for their victory. Just four days earlier, United had embarrassingly suffered their worst defeat of the season to an in-form St Mirren, who came away from Tannadice with an astonishing 5-1 victory. An early goal set the Paisley men on their way, before two controversial penalty awards put them firmly in the driving seat. The rest, as they say, is history and a lacklustre United were left licking their wounds on a thoroughly miserable night for all concerned.

For the Arabs, it’s getting increasingly difficult to understand what exactly is going wrong on the pitch. It could be argued that Mellon’s tactics have been questionable, leaving many fans scratching their heads as to why his side are simply not finding the net with the players he has at his disposal. Debates on social media centre on a lack of service to Lawrence Shankland from the wide men, a lack of creativity in midfield and just plain poor finishing.  It can’t all be down to bad luck or bad decisions by officials and the natives, as they say, are restless and becoming increasingly frustrated as the weeks go by.

It’s probably just as well for Mellon that the team is operating behind closed doors at present as he would no doubt be receiving pelters from the Arab faithful he is so keen to win over. That is proving to be a very tough ask, however, as stats show that over the last 11 games United have only won once by beating Kilmarnock 2-0 at Tannadice in December.

Drab goalless encounters away at both Hamilton and Aberdeen were little to write home about, but at least a clean sheet gave some encouragement. A midweek encounter with St Johnstone threw up another share of the spoils for the third time in the league this season. In this one, the Perth side edged ahead twice before something very special occurred with United creating something out of nothing. Remarkably, from just inside his own half, striker Lawrence Shankland unleashed a first-time effort from all of 53 yards catching the Saints keeper off his line and found the back of the net. An undoubted highlight of the night and a strike that was described as ‘ridiculous.’ It will take some beating in the goal of the season competition.

United now face a series of games that will see them hit the road in all but one of their five games in February. On current form it’s going to be a tall order to pick up points, but the importance of a turnaround in fortune is crucial to avoid going into freefall. United have, to their credit, already won at Ross County and Motherwell earlier in the season, but fell heavily at Rangers and Kilmarnock, which are the other two venues on the fixture list.

United have been quiet in the transfer window due to financial constraints, however Mellon says he has not been told to sell players during the transfer window to ease the financial burden on the club. One man who has been removed from the wage bill is winger Paul McMullan who has made the short trip across the street to Dens Park and will see out the rest of his season in the Championship with the neighbours. It has been reported recently that the club has approached the Supporters Foundation for a second cash injection of up to £100,000. It also emerged that players had agreed wage cuts to help the club through the Covid-19 pandemic. With no revenue coming in though—as a result of the lack of fans through the gate—there could well be uncertain times ahead for the Tangerines as well as many other clubs in the country.

It’s disheartening that earlier in the season United looked like a settled side worthy of the topflight and were looking at European places. These aspirations have long since disappeared and the club has now regressed to being the new boys again with the objective of maintaining Premiership status. Mellon simply has to work with what he has at the club and help turn this around or, as much as it pains me to say it, yet another managers’ jacket could be on a ‘shoogly peg’ at Tannadice.