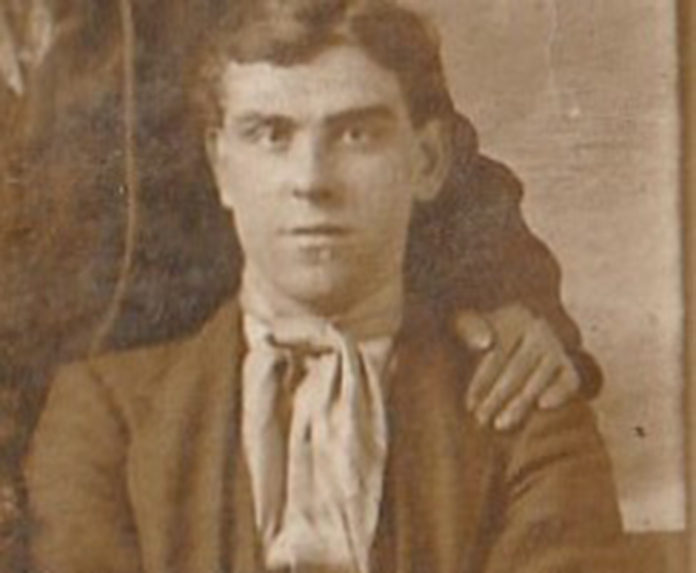 IN BRIGHT sunshine on Easter Sunday, a representative of the 1916 Rising Centenary Committee (Scotland), visited a nearby cemetery in Glasgow, where he laid flowers on the grave of Óglach Patrick James McGuire.

Patrick J. Maguire was born in Derrygonnelly, Fermanagh, on February 20, 1889. In 1912 he emigrated to Glasgow, and soon after its formation in the city in early 1914, he joined ‘A’ Company of the Glasgow and West of Scotland Regiment of the Irish Volunteers. In early 1916 he crossed from Glasgow to Dublin and joined the Kimmage Garrison. As well as route marching and drills in the camp, the men made hand grenades and cartridges for shotguns. They removed the pellets in the cartridges and replaced them with lead balls. They also made pikes and every Volunteer in Kimmage on Easter Sunday carried a pike along with his rifle. McGuire helped fellow Glasgow Volunteer Séumas Robinson, to heat the pike heads in a rivet fire and beat them to a sharp point. Some of the volunteers obtained work in local quarries where they obtained dynamite to make hand grenades and bombs.

On Easter Monday morning, the members of the Kimmage Garrison boarded a tram at Harold’s Cross with Count Plunkett insisting on paying their fares. At O’Connell Bridge, they alighted and marched to Liberty Hall. From there they marched via Abbey Street into O’Connell Street accompanied by all of the General Headquarters Staff. No 1 Company marched past the GPO, Nos 2 & 3 faced the GPO and No 4 Company took up the rear. These Volunteers were the first to enter the GPO. The Proclamation was read by Pádraig  Pearse at 12 noon and the Republic was declared.

McGuire remained in the GPO throughout the week. By Friday the building had caught fire and it became so hot that they were forced to evacuate. After the surrender, Patrick and his comrades were transported to Stafford Jail in England and then to Wormwood Scrubs where they were taken before an interrogation commission. They were then removed to Frongoch Detention Camp.

McGuire was released from Frongoch Internment Camp at Christmas 1916 and he made his way back to Glasgow, and resided in the Springburn district. He re-joined joined ‘A’ Company which was involved mostly in the collecting, procurement and purchasing of arms and munitions for the struggle in Ireland, which was stepped up during the War of Independence. Patrick James McGuire participated in all of his Company’s activities.

McGuire took the anti-treaty side in the Civil War. He refused to take a pension or medals for service in the Rising and War of Independence. De Valera wrote to him on one occasion to suggest that he apply for a pension, but he again refused and replied that he would take a pension only when Ireland was free. He got to dislike De Valera due to his hard-line policies towards Republicans.

McGuire would never accept the partition of Ireland and remained a Republican for the rest of his life. In the 1950s, he served for a period as the secretary of Sinn Féin which maintained an active presence in Scotland and functioned openly and without hindrance. Reports of its activities regularly appeared in the Republican newspaper the United Irishman which had a monthly distribution of 1200 copies in Glasgow. McGuire actively assisted his cumann (branch) sell the United Irishman around the Irish pubs and took up collections for the republican prisoners’ dependents fund. A strong Irish-Ireland cultural atmosphere existed in Sinn Féin and apart from the regular round of céilís and concerts, there was an Irish Film Club and the Four Masters Discussion Group.

On the 50th anniversary of the Rising, McGuire was represented by his younger brother Denis Hugh Maguire, at a commemoration ceremony at the grave of Volunteer Philip Cassidy in Arney Cemetery in Fermanagh.

Patrick J McGuire died in Glasgow on May 18, 1970 aged 81, and was buried in St Kentigern’s Cemetery in the Lambhill district of Glasgow. He was accorded a Republican funeral by his Sinn Féin comrades who formed a guard of honour and the Tricolour was draped over his coffin.