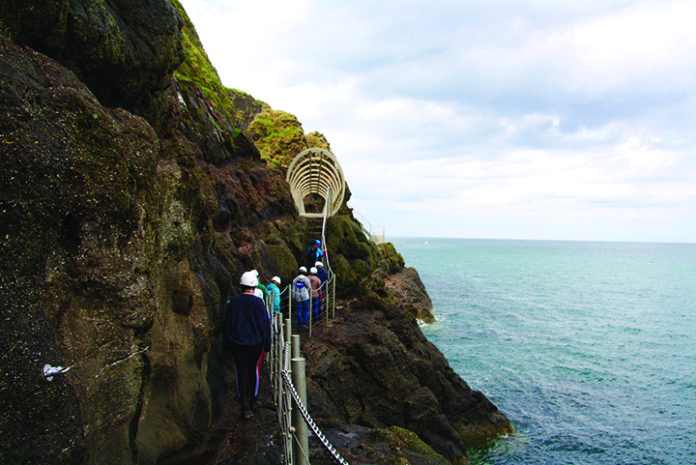 IF YOU’RE on the way to or from the ferry at Larne or Belfast, make the short diversion to Islandmagee for an unforgettable, cliff-hanging experience at The Gobbins, a coastal path like no other, which puts you in close touch with the waters of Belfast Lough.

The Gobbins owes its origins to flamboyant, Victorian railway engineer, Berkley Deane Wise, who wanted to give the area a tourist attraction like no other, served from nearby Ballycarry station on the Belfast & Northern Counties Railway, whose chief engineer’s post Wise held.

Wise had already built a cliff-top path to Blackhead lighthouse from Whitehead, the town which he invented as a holiday resort, by the simple expedient of giving it its current beach, by transporting tons of sand by train from Portrush, and building a strand where none had existed before.

That’s why the path—hugging the base of spectacular sea cliffs, and crossing ravines with spectacular, steel bridges and even a tunnel, taking visitors down, below sea level—was a logical step forward for Wise, as he conquered nature and boosted tourism and railway traffic all at once.

Railway workers built the two-mile path, carrying out tremendous feats of engineering with barges provided by Harland & Wolff, whose workers were given free access to the path for many years afterwards, floating the bridges up from Belfast, and erecting them at the challenging cliff locations using cranes and sheer muscle power.

The path opened to visitors in 1902 and became an instant success story, with tourists from all over Ireland, and beyond, enjoying the spectacular views across Belfast Lough and out, across the North Channel to the Scottish coast, as they flocked in their thousands of experience Wise’s engineering triumph.

They came until the 1930s, when the LMS railway found that constant expenditure to keep the path safe—especially after it was pounded by winter storms—meant that it was running at a loss, and closed it in 1938.

The tour today
After the Second World War, The Gobbins was re-opened by the Ulster Transport Authority, but, again, losses saw it close in 1961, and it might have stayed derelict until Larne Borough Council took the bold step of restoring the path in 2014 in a £7.5 million project, backed by EU funding, which saw Wise’s bridges replaced, like-for-like, with modern structures, and re-opened to the public in 2015.

Today, your tour starts at a purpose-built visitor centre, and you travel as part of a group of 14 by minibus to the steep hill, down to the path, where it’s footwork all the way on your three-hour, two-mile, clamber along The Gobbins.

You have to don walking boots and hard hat, and our cheery and entertaining group leader and guide, Graham, made sure that we were all properly clad and shod, and led us out along the cliff bottom, to the entrance to the path.

Known to this day as ‘Wise’s Eye,’ after the path’s creator, the ‘eye’ is an entrance, carved out of the rock face. Through it you enter another world, as the narrow path takes you just above crashing waves and over bridges which afford stunning sea views. You also get up close with all manner of nesting seabirds, which don’t at all mind the visitors passing beneath them, although, Graham advised us not to look up—and the smell of so much white stuff, is never forgotten!

We also saw Ireland’s only mainland colony of Puffins, while Graham pointed out seals, fish in the waters below us, and told us of the lore of the path, created entirely by Wise himself, who Christened various parts with memorable names, such as ‘The Aquarium’ or ‘Man o’ War,’ while ‘The Tunnel’ remains as spectacular as the day the path originally opened in 1902.

This is a cliff walk like no other, but it is also a walk not for the faint-hearted, as the safety requirements are real. Walking on a narrow, at times slippery, stepped path above the waves—albeit always with a stout, metal barrier at the sea-side of the walkway—requires concentration. But follow the expert guidance of Graham and

his fellow guides and you will really enjoy the experience, taking in sea air, enjoying seascape views beneath the great arc of the sky and watching shipping making its way in and out of Belfast Lough.

At the end of the return walk it’s time to scale the steep hill back up to road level, where your minibus takes you back to the visitor centre. The centre includes displays on the history of the path and a pleasant café to refresh you after what is, by any standards, a strenuous, but very rewarding walk above the waves.

A new perspective
The Gobbins is a modern take on a Victorian idea, brilliantly executed, and not to be missed if you want to see Irish seascape from a new perspective. Looking up at the soaring cliffs above you, walking in the footsteps of the men who built the path, and of the thousands of tourists of more than 100 years ago, you appreciate the sheer brilliance and derring-do of Berkely Deane Wise.

He was the man who made The Gobbins one of Ireland’s must-see attractions of his day, and, thanks to the foresight and equal courage of those who led its revival today, you too can enjoy what is a real cliff-hanger in every sense of the word.

Full details of opening times, bookings and prices are at: www.thegobbinscliffpath.com