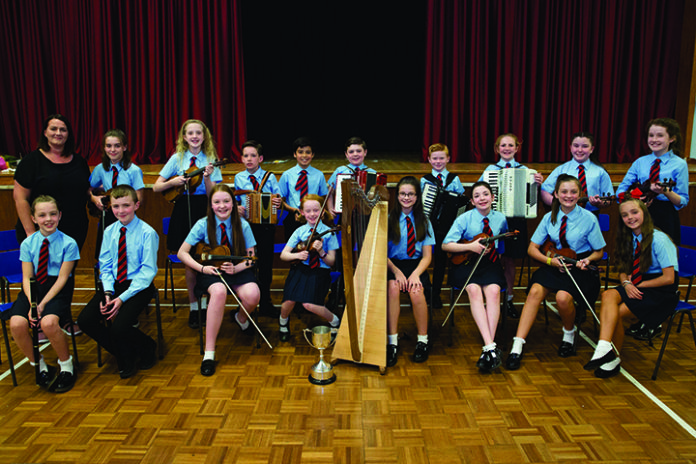 ST Patrick’s Day—Ireland’s national day—has become a unique worldwide celebration. It’s much more than a single day of course. Here in Scotland the celebrations began with the start of the Coatbridge St Patrick’s Day Festival on March 2, and will run on through to the Glasgow St Patrick’s Festival and until Edinburgh’s Festival of Ireland reaches its conclusion on March 23. And it is much more than a celebration of Irish identity—it celebrates too Ireland’s partnership and friendship with countries and communities across the world. It is a global celebration for a global nation.

St Patrick’s Day has many different strands of meaning. One that is particularly special for us in Scotland is what it says about the depth of the Irish-Scottish connection, which goes back to a time long before our two nations had developed their current character and identity.

There is of course no consensus on St Patrick’s origins, but the tradition that he hailed from a Roman settlement near the western end of the Antonine Wall in what is now West Dunbartonshire seems as plausible as any other. Captured by an Irish raiding party, he was enslaved and spent six years tending animals on an Irish mountainside. Through determination and ingenuity, he escaped back home. But he could not shake Ireland from his heart and he decided to return as a Christian missionary. His work in his adopted land led to revolutionary and enduring changes in its identity and its culture.

Patrick was a figure of the fifth century—tradition holds that he first came to Ireland in 432AD and that he died in the latter half of that century. A hundred years later, another patron saint of Ireland traced Patrick’s journey in the opposite direction. St Colmcille, known today in Scotland as St Columba, was born at Gartan in Donegal and came to Scotland in about 563AD to establish the monastery of Iona, which would become the most famous centre of learning in the Celtic world. His influence on the land that is now Scotland was immense and echoes through the ages.

The traditional stories of Patrick and Colmcille demonstrate how ancient Ireland and ancient Scotland shaped each other; they exemplify how the movement of people between our shores over many centuries created the nations and identities we know today. That movement back and forth continued and continues. The impact of Scottish migration to Ireland—which reached its zenith in the 17th century—remains very evident; Irish migration to Scotland over the last century and a half has had a profound impact on modern Scottish society.

So when we celebrate St Patrick’s Day in Scotland we are celebrating, perhaps more than anywhere else in the world, a deep and rich history of connection between our two nations, a connection that helped to define them both.

Modern ties
It is that shared history that provides the backdrop to the modern Irish-Scottish connection. Developments two decades ago revitalised our ties: the Good Friday Agreement of 1998, which created a new context for the overall British-Irish relationship; the opening of an Irish Consulate General in Edinburgh in 1998; the establishment of the Scottish Parliament and Scottish Government in 1999; and the establishment also in 1999 of the British-Irish Council as a framework to bring together the governments and administrations across these islands and allow them to work together to address shared challenges.

The new energy that these developments at the end of the 1990s brought to Irish-Scottish ties was immediately evident. The visit to Ireland made in 1999 by the late Donald Dewar was the first official overseas engagement undertaken by a First Minister of Scotland. The first foreign head of state to visit Scotland in the wake of the establishment of the Scottish Parliament was President Mary McAleese, who travelled to Glasgow, Edinburgh and Aberdeen in November 1999.

In the last 20 years, all aspects of our relationship have flourished—our cultural ties, political links, economic cooperation and even our sporting connections. We are seeing an unprecedented number of visits by Ministers in both directions. The visit to Scotland this month by Ireland’s Minister of State for Tourism and Sport, Brendan Griffin TD, as part of the Government’s St Patrick’s Day programme is the ninth visit to Scotland by an Irish Government Minister in the space of 12 months. The traffic has been equally busy in the opposite direction.

Cultural and economic connections
In the cultural world, where our connections have their deepest roots, they continue to thrive at all levels and all ages. What better evidence can be offered than the strength of traditional Irish culture in Scotland—exemplified by the performance of the St Roch’s under-12 musicians from the Irish Minstrels branch of Comhaltas Ceoltóirí Éireann in Glasgow in winning the grúpa cheoil competition at Fleadh Cheoil na hÉireann in Drogheda last year (above)? Or, indeed, the numbers who regularly gather in Glasgow and Edinburgh for Irish language classes and conversation groups organised by Conradh na Gaeilge? Equally, in the sporting world, there is the valuable work being done by Scotland’s GAA clubs, both on the field and off, to develop Gaelic Games here and forge links with clubs and communities in Ireland.

It is the growth of our economic and trading links, though, that is perhaps easiest to quantify. Here, there is real evidence of the momentum that is building in the Irish-Scottish relationship, helped by the work of organisations such as Causeway Ireland Scotland Business Exchange. Late last year, Ireland’s Minister for Business, Enterprise and Innovation, Heather Humphreys TD, led the largest ever Irish trade mission to Scotland, organised by Enterprise Ireland. It involved 56 Irish companies across seven business sectors keen to strengthen their ties to Scotland and to learn about business opportunities here. Scotland’s Minister for Trade, Investment and Innovation, Ivan McKee MSP, led a Scottish trade mission to Ireland the following month, with a visit to the Donegal Gaeltacht supported by Údarás na Gaeltachta and West Lothian Chamber of Commerce. West Lothian Chamber is working with South Dublin Chamber of Commerce and other chambers in the Dublin region to organise another major Irish trade visit to Scotland next month, while Enterprise Ireland is preparing for a further ministerial trade mission in the autumn.

These exchanges are producing real results that are evident in the scale of our economic relationship. Enterprise Ireland estimates that, since 2012, Irish exports to Scotland have increased by 104 per cent. Ireland is now the fourth-largest source of foreign direct investment into Scotland. According to the Scottish Government, Scottish exports to Ireland increased by more than 15 per cent in 2017 alone. Ireland is now the fifth-largest market for Scotland’s international exports; that demonstrates huge progress since 1997, when Ireland ranked as Scotland’s thirteenth-largest market. This trading relationship is contributing to growth, and creating and sustaining jobs, in both economies.

Growing relationships
Work is being done at all levels to strengthen and develop our ties even further. An area of particular interest is the development of connections between our cities and local authorities, and one initiative in this area deserves particular mention.

As The Irish Voice reported in its January issue, West Dunbartonshire Council and Donegal County Council are developing a new partnership, focused in particular on connections between Clydebank and Letterkenny; this will be formalised at a ceremony in West Dunbartonshire later this month. It is surely of note that Old Kilpatrick, three miles from Clydebank, is identified by tradition as the birthplace of St Patrick; while Gartan, ten miles from Letterkenny, was the birthplace of St Colmcille.

The pattern of that ancient Irish-Scottish connection, exemplified 15 centuries ago by the stories of Patrick and Colmcille, lives on; a connection that seems to justify the description given of it by the great Scottish Gaelic poet Sorley MacLean: “The humanity/that the ocean could not break/that a thousand years has not severed.”

That, on St Patrick’s Day, is surely something for us all to celebrate.