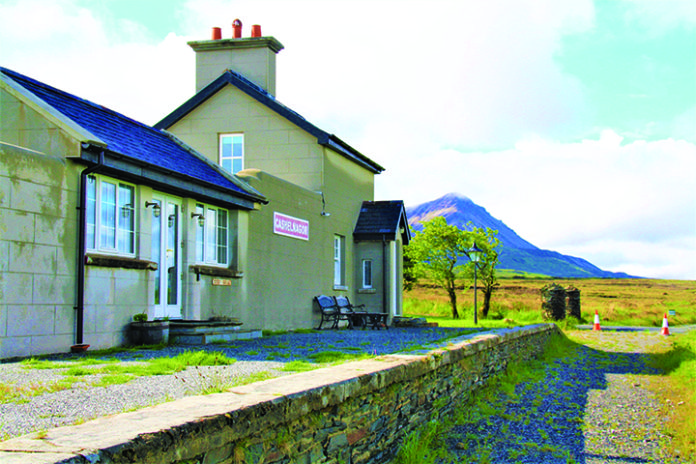 WE’RE not long back from a two-night stay at one of the most atmospheric Airbnb lets in Ireland, and one that allows you to track the past.

My wife and I stayed at Cashelnagor Station, literally in the middle of nowhere, high on the bogs below Donegal’s Derryveagh Mountains, under the shadow of Errigal, and five miles from the nearest village of Gortahork.

The station opened in 1903 as the highest point, at 410 feet above sea level, of the Letterkenny & Burtonport Extension Railway, built by the British Government to boost fishing at Burtonport, as part of Lord Balfour’s plans to kill Home Rule—as he said—with kindness.

But the line had a more sinister purpose. That was to link West Donegal with Derry, so that thousands could sail for Scotland and the United States, releasing pressure on the land of West Donegal, and cutting unrest and demands for home rule. It was ethnic cleansing by rail.

Between 1903 and 1947, the narrow gauge Londonderry & Lough Swilly Railway served Cashelnagor, with two trains daily to Derry and Burtonport carrying herring, goods of all sorts, and, crucially thousands of migrating local people from along the line, to new lives. In the wooden-seated carriages were seasonal ‘tattie howkers,’ for lowland Scottish farms potato harvest. Children, as young as 14, travelled to Letterkenny Hiring Fair, to be snapped up, almost as in a slave market, by the rich, Protestant farmers of the fertile Lagan area, to work for a full year.

The forebears of thousands of members of the Scottish, Irish diaspora began their journey here, from Cashelnagor, and that atmosphere can be tapped into today, as you stand on the restored platform by the abandoned trackbed, almost imagining that you can her the whistle of a heavy steam train, forging up the gradient from Gweedore.

Surviving and thriving
In its day, the station survived the traumas of the War of Independence, the Civil War and partition, and it was also a popular gathering place of an evening, as local young people gathered to welcome the train in. One stationmaster—an Orangeman—was hounded out of the station by locals, after his son allegedly derailed a train, and, after closure, the last stationmaster and his family stayed on in the now-trainless station until 1954, after which it was abandoned.

Cashelnagor came back to life, briefly in 1992, when the BBC cosmetically restored the main buildings to shoot scenes for The Railway Station Man, starring Julie Christie and Donald Sutherland, released in 1993, but, otherwise the station began to return to nature, until Neil Tee—an English railway buff—bought it in 2005, and began limited restoration.

But it wasn’t until 2017, that the station’s fortunes really changed, for local couple, Gavin and Josephine Kelly, bought the semi-ruin, and, over the next year, they not just rebuilt the station, but restored it faithfully, too, capturing all of its character while putting in electricity, central heating and plumbing, and fitting it out as two holiday lets.

The larger one—accommodating up to eight people—is in the stationmaster’s house, with a turf fire, kitchen, dining room, sitting room and two bedrooms, one en-suite and a bathroom with vintage bath, while the smaller, the former ticket office and waiting room, can accommodate four.

Everything has been done tastefully and as close as possible to the original, so that comfort is king as the winds, and sometimes, the rains of Donegal rage outside, giving a real impression of what life must have been like for the stationmaster and his family in this remote spot.

There are lovely touches such as framed, Lough Swilly Railway Letterkenny Hiring Fair and timetable posters, an authentic, L&LSR cast iron sign, warning against leaving gates open to allow livestock to wander on the line, and period lampposts complete the illusion that a train might just call again sometime soon.

“We are planning to lay a section of narrow gauge track and even thinking about a replica locomotive,” Josephine (above right) said. “We’re very conscious of the fact that we’re custodians of a significant piece of local, railway heritage, as well as providing quality, holiday accommodation.”

Exploring Donegal
If you do want to explore the railway heritage of Donegal, this is an excellent location, and there’s even access to a railway walk on the old track bed to Falcarragh Station, and on to Lough Agher below Muckish Mountain.

But, lift your eyes from the tracks towards the magnificence of Errigal and the Derryveaghs, or drive out to the coast at Gortahork. You can visit the enchanting Bloody Foreland, head up to Falcarragh and its magnificent strand, or make tracks for Magherarorty strand and the coast line of the Rosses.

Donegal Airport at Carrickfinn is also close by, and despite the impression of remoteness of the station, all that you want to see and need is easily accessible, while the quiet roads around Cashelnagor, offer superb cycling and walking.

There are plans to develop the entire Lough Swilly Railway track bed from Derry to Burtonport as a greenway for walking and cycling, linking sections already completed at Burtonport, Creeslough and Falcarragh, so, Cashelnagore Station could be connected, once again by the railway that brought it to the hills of Donegal in the early years of last century.

Make tracks to Cashelnagor Station, then. Like us, you’ll find that it’s just the ticket for a comfortable, atmospheric and historical stay. Now, could that be the 10.30 from Burtonport? I’d better go out on to the platform and check!