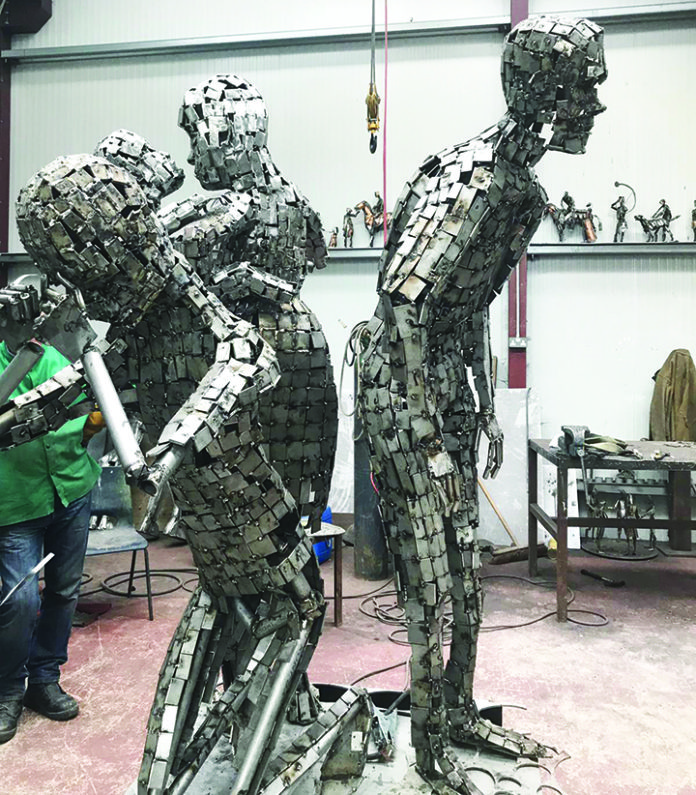 WORK on the much-awaited Tower Of Silence by Donegal sculptor John McCarron has commenced as fundraising by the Coiste Cuimhneachain An Gorta Mór (Great Hunger Memorial Committee) continues apace.

Already more than £50,000 of the required £80,000 has been raised thanks to a range of fundraising efforts and donations by the Glasgow Irish community and their friends across the world. The progress so far means that the Irish community in the city are closer than ever to welcoming the fitting memorial to the dead and displaced of the Great Hunger which it has longed for, for so long.

The site of the memorial at St Mary’s is now ready and waiting for Mr McCarron’s artwork (above), and the level of the excitement in the Irish community and beyond can be seen in the impressive manner in which they have responded to the fundraising call.

“Excitement is mounting as we begin to see the memorial to An Gorta Mór taking shape thanks to the regular photo and video updates from sculptor John McCarron,” the committee said. “The figures are being put together piece by piece before being polished and mounted on the steel platform. The wording on the plinth will be laser cut on to it in a workshop in Derry.

“Our project photographer, Tommy Gilmour, is, this week, taking photographs at the St Mary’s site at John’s request in order to establish which way the sunlight and shadows fall at various points on the day. This is to establish the correct orientation of the figures.

“Coinciding with reaching 60 per cent of the target funds, John tells us that he is probably 60 per cent of the way through the build. There are a number of fundraising initiatives ongoing with the most imminent being a ‘one singer, one song’ evening of traditional music and singers from the community.

“This will be part of the Govanhill International Festival 2019 and will be held in McNeill’s Bar in Torrisdale Street, Glasgow on Sunday August 11, from 4-10.30. Tickets are priced at £8 waged/£4 unwaged.

“This should be a great night and a chance for people to catch up with the progress of the project. There will also be a large event in September, so people should keep an eye out for that.

“There have been quite a few local events—both here and in Ireland—organised by individuals and football supporters’ clubs that have been very successful.

“If you are able to run a fundraiser—large or small—please do and just keep us posted. The committee would be happy to publicise it and support it in any way. Remember, we are building it!”