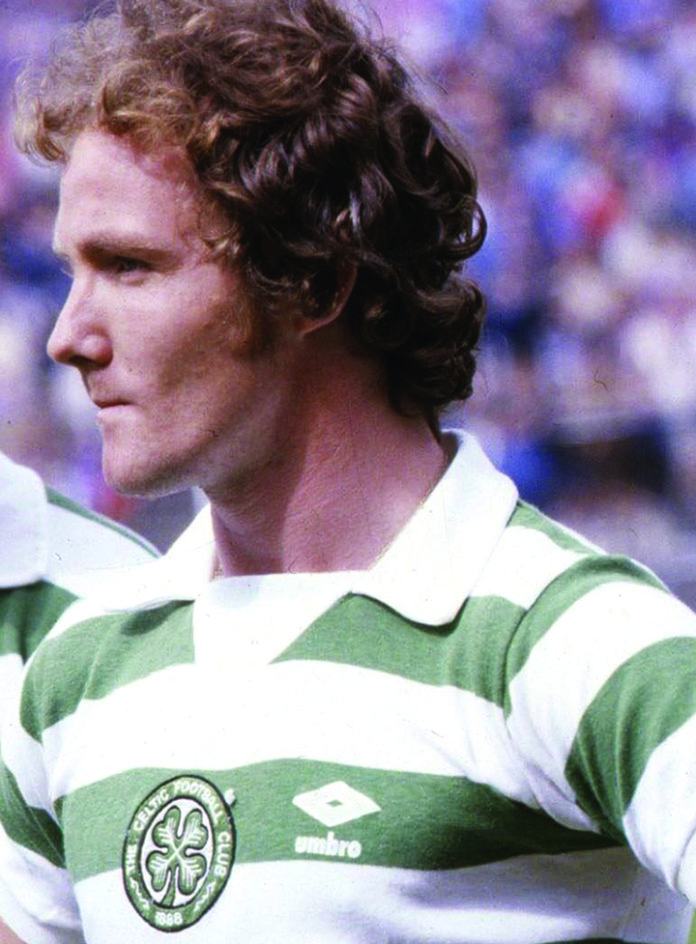 A NEW book aimed at celebrating the life of the former Celtic star known as ‘the man who loved the green,’ Johnny Doyle, is in the works.

The much-loved winger (above)—who was tragically electrocuted and died in his family home on October 19, 1981—played for his boyhood heroes from 1976 until his passing and was famous for his pace, tenacity and no shortage of skill on the ball. He played 180 games for Celtic scoring 36 goals—including a famous bullet header in a 2-0 win over Real Madrid at Celtic Park—and won three league titles and two Scottish Cups.

He is fondly remembered by his former teammates and fans alike and it is that strong feeling that has compelled his daughter Joanna—who was just three when her dad passed away—to begin work on the project with writer and Celtic fan, Paul McQuade, editor of The Shamrock retro Celtic fanzine.

“Talk first came about a book at his 30th anniversary about eight years ago and this is the wheels finally in motion now and it’s coming together nicely,” Joanna told The Irish Voice. “I’m really excited about it. I want the book to capture the man he was—a Celtic fan, player and family man. I want to write this book with the fans and for the fans, because my dad was a fan first and foremost.

“I’m looking to obtain personal memories of my dad from people and the book will be a fantastic way to share them. Anyone can find out about his career and statistics online easily enough—and this book will have some of that in it—but I want it to be more personal and give something back to the fans and allow them to get a glimpse into what his life was like off the park and what kind of person and family man he was.

“He doesn’t deserve to just fade away into history. The newer generations of Celtic fans should get the chance to learn about him and what it was to play for the jersey back then and interact with fans by choice. And he should always be remembered. Like the song lyrics said ‘forever more the fans will sing of Johnny Doyle on the wing.’

“In terms of contributions so far, Paul has already spoken to some people and supporters clubs. I am in touch with a good mate of my dad’s who has loads of stories about him. Player-wise Mick Conroy is up for it and I am still looking to get in touch with many others. The response from supporters has been great. I have an exceptional feeling about this book. I think the fans are going to love it.”

Joanna also expressed her delight at being able to work on the book with Paul, as she joked that she ‘had no idea how to put a book together,’ and the author, for his part, is proud to be working on it too.

“Joanna asked me to write a book about her dad,” Paul explained. “I’d previously written a booklet about Johnny some years ago to raise funds for a banner in his honour. After the initial research I’m now in the process of gathering in fan memories and stories about Johnny. There have been some good ones already and people have provided us with photos too. We are hoping to have the book completed by Christmas if we can.”

Previously in The Irish Voice, Joanna had made an appeal to fans to get in touch if they had any footage of her dad being interviewed, as she had no real memories of his voice. Although this initial appeal didn’t yield anything, Joanna hopes that the book will help revive this search too.

“I am convinced there is something out there,” Joanna said. “Maybe the book will bring more attention and I’ll be able to find something.”

The supporters had helped in a previous effort to secure mementos of Johnny’s career for Joanna when the Celtic online forum, The Huddleboard, raised more than £1600 to secure his 1980 Scottish Cup Final jersey. The fans presented the jersey to Joanna along with a collection of programmes related to various milestones in his career.

During her conversations with The Irish Voice, Joanna also gave a unique insight into her dad’s Irish ancestry, explaining that he had ancestral connections that go right to the heart of the country.

“My dad’s Irish ancestry can be traced back to Westmeath,” Joanna said. “His ancestor was a Thomas Doyle and his wife Hetty Heffron who met in the 1820s. That’s as far back as I have been able to trace while doing the family tree.”

Anyone who wishes to contribute to the book—or who may have information related to archive footage of Johnny—can e-mail: thejohnnydoylebook@gmail.com, follow @JohnnyDoyleBook on Twitter