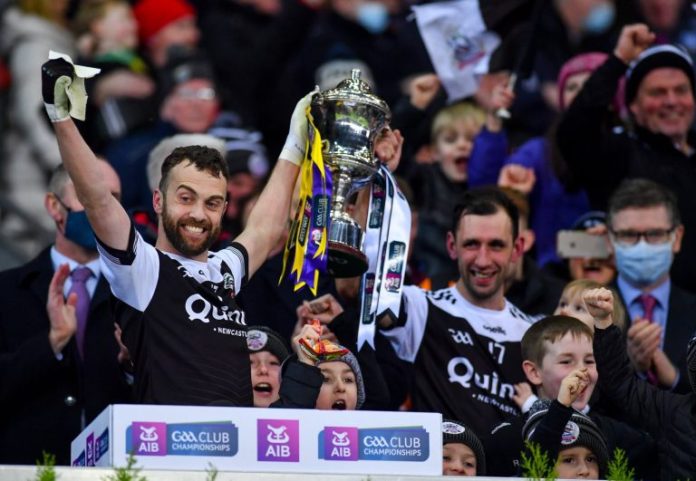 LAST month was a busy, entertaining one within the GAA at both club and county. For me, the club scene is the crown in the jewel of the organisation and Kilcoo (Down) personify that more than any at the moment.

A village with a population of approximately 1500 people beating Dublin’s Kilmacaud Crokes with a membership of around 5000 in the All-Ireland Club Football Final after extra time will be a highlight that will be almost impossible to match this year.

Kilcoo have set the tone and lived the dream of every club in the country, no more so than in the rural scene. They are the antithesis of modern-day GAA. A truly outstanding achievement.

The Hurling Final preceded the football final at HQ that day and with another game laced with late drama. A goal in the fifth minute of injury time from substitute Harry Riddle saw Waterford’s Ballygunner end the three-in-a-row chasing Ballyhale Shamrocks (Kilkenny) by the minimum scoreline. A fantastic win for Ballygunner after many near misses over the years against a club synonymous throughout the country with their glorious history

What has happened to the mighty Dubs? Four defeats in a row and staring relegation to Division 2 in the face. With pressure mounting and odds dropping I must add I am hoping to see a relegation for the Dubs. My own county Antrim are performing well in Division 3 and on course for a promotion.

Antrim v Dublin in West Belfast in the National Football League? Casement Park would need to be rebuilt by 2023 to fill the demand for the tickets within Antrim alone!

Derry and Cavan are looking good for promotion from Divisions 2 and 4 respectively, with Armagh and Donegal producing in Division 1 also, could it be a clean sweep across all four divisions for the Ulster counties? Pat Spillane would combust at the thought. It would be amiss not to mention London’s outstanding start to Division 4, if they can maintain current form they wont be far off promotion to Division 3 and what an achievement that would be.

The hurling leagues have produced some shock results and performances, mainly in the form of the all-conquering Limerick. One point from four games and three reds cards does not make for good reading for John Kiely’s men. What has gone wrong for the Treaty County? A significant improvement required if 3-in-a-row is to be won.

Cork and Wexford have arguably been the standing out of the league thus far. The ever-green Pa Horgan and Rory O’Connor have been excellent in recent weeks for their respective sides. Could we have a new name on the Liam McCarthy? League form suggest we could have between five and six contenders. Wexford could be the outsiders tip!

Unfortunately for me, Antrim have been on the end of several narrow defeats. A massive game against Laois ended in heartbreak with the last puck of the game to lose by the minimum in an unofficial relegation play off decider. With some big games coming up, if they can produce the type of form they produced against Waterford and Kilkenny then another year in Division 1 should be secured. For long term success and hurling in Ulster it is key to be playing at the top level.

Further down the divisions, Donegal and Down have been some of the standouts with some impressive results.

For many counties the leagues are more important than the championship. With the new football championship proposals recently voted in at congress for 2023, I believe we will see higher quality of championship games than recent years, less mismatches and more evenly matched game, like the league format.

One further highlight from congress was the vote to merge all associations, the GAA, LFGA & Camogie. This will hopefully ensure less clashes across the boards, increased communications, and better welfare of our players. Common sense should prevail and looking forward to seeing the finalisation of this merger.