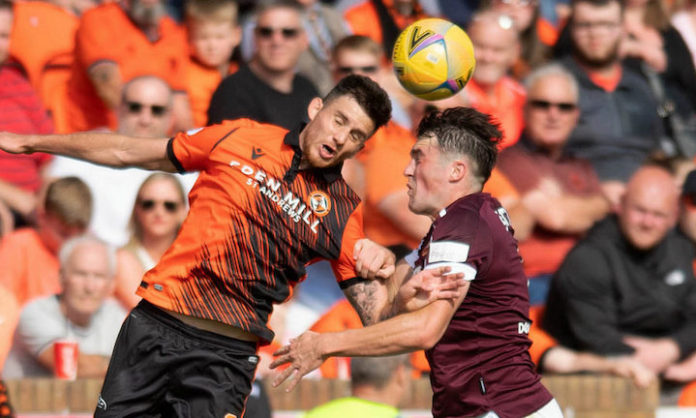 AS THE first month of league action comes to close for Dundee United and their new head coach Thomas Courts, it’s another case of ‘must do better’ after going down 2-0 to an in-form Hearts side at Tannadice in their most recent encounter (above).

It was another game where United fans were left wondering why their side started almost pedestrian like and offered so little at the other end until they were already behind. A questionable decision to award a penalty for a ‘foul’ on Gary Mackay-Steven on the stroke of half time, resulted in Liam Boyce putting the Jambos 1-0 up after his initial kick was saved by new United keeper Trevor Carson.  United were much stronger in the second period, but were thwarted by a string of fine saves by Craig Gordon—one in particular was outstanding from a free kick from United skipper Charlie Mulgrew. Pushing up for the equaliser late on, however, they were sucker-punched with Hearts again scoring in the final minute picking off a tired looking United defence.

United had started their league programme up at Aberdeen in similar fashion, losing 2-0 in a poor showing with Courts’ side offering very little on the day. Even more alarming was the Dons domination with almost 70 per cent of possession to boot.

Based on that performance, it was little wonder that expectation levels were low in the next fixture against Rangers at Tannadice. However, the fans couldn’t have been more wrong with United on the front foot from the off, while producing some fine football to carve out a 1-0 victory, ending a 17-month domestic run for the Ibrox side. Rangers may well have had one eye on a crucial Champions League tie as well, and If they did, United took full advantage. The hero of the hour was full-back Jamie Robson, who produced an excellent finish after a fortunate deflection had put him through on goal with around 25 mins left on the clock.  This victory was no fluke though and the spirited performance shows exactly what this side is capable of.

The problem though, as Robson himself admitted after the game, is consistency and United can’t just raise their game versus the champions and fall back into old habits the week after. Nonetheless, they did exactly this in the following game at Ayr in the League Cup, where it took penalties to overcome the Championship side in what was hardly a classic.

An away trip in a Tayside derby was next up at St Johnstone and with the Perth side renowned for being a tough side to break down, a Peter Pawlett strike in the final quarter sent the United end into raptures and ensured they took the spoils on the day. Pawlett earned himself a booking for instigating a ‘piley on’ celebration with his team mates before a soft tussle with Saints’ midfielder Murray Davidson saw him dismissed for the remainder of the match. United did well to hang on though showing reliance and character to get the job done.

So what’s been learned so far is that there are the bones of a decent squad there for Courts to work with and there is evidence that they can perform at the top level when called upon.

Courts is determined to give youth a chance and has brought in 20-year midfielder old Dylan Levitt on loan from Manchester United. Levitt has eight full caps for Wales and joins the Tangerines for the rest of the season. Marc McNulty has also re-joined from Reading and will try his luck in the number 9 shirt. Two key players United will have to do without are keeper Benji Siegrist who has sustained an injury to his cruciate ligament and will play no part this year and, of course, Lawrence Shankland who has made the move to Beerschot in the Belgian Premier League. Shanks’ move was just a matter of time in all honesty and the only eyebrows raised were perhaps over his choice of destination. However he leaves with the good will of Arabs and the fans wish him all the best for his new venture and thank him for his contribution to the team over the last few seasons.