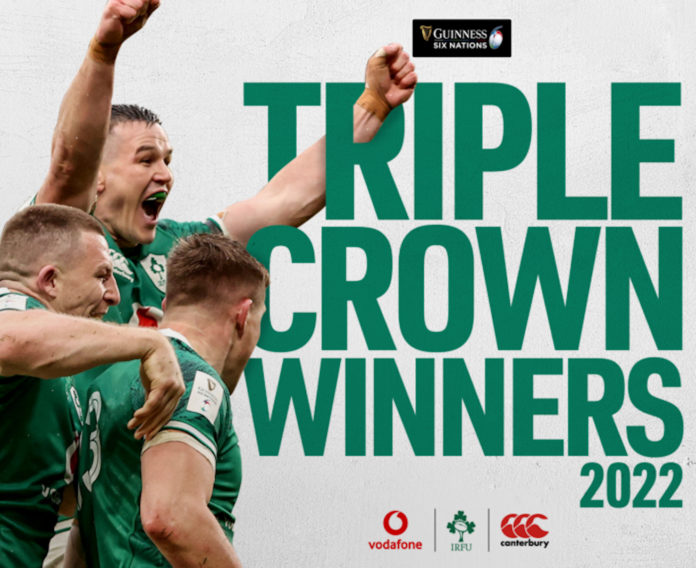 IT WAS a case of so near and yet so far for the Irish rugby team this year. On the plus side, the 2022 Men’s Six Nations firmly established Ireland as the second-best side in the Northern Hemisphere. Conversely, it firmly established Ireland as the second best side in the Northern Hemisphere.

The championship clearly has two divisions these days— Ireland and France and everyone else. Ireland won the Triple Crown for the first time since 2018 and did so in style, dispatching Wales, England and Scotland to claim bonus-point victories in all three tests.

In their five Championship Tests in 2021, Ireland gained a bonus point in each, scoring 24 tries—four vs Wales, three vs France, nine vs Italy, four vs England, four vs Scotland—and finishing way out in front in terms of points difference on 105, compared to France’s 68. Ireland have never scored as many tries in a Championship in their history.
They also made more linebreaks than anyone else—30—and played a brand of rugby all watching could appreciate, linking forwards to backs superbly and attacking at will.

Frustratingly, the Grand Slam decider came in the second week, when Ireland pushed France hard in Paris, in the game of the tournament. They outscored France by three tries to two, but as good as Ireland are, however, France are better. The new found power and discipline of Les Bleus, married to their traditional flair could not be stopped.

All of which leaves Andy Farrell’s side in an odd position. They are very good—better than most—but not the best.

Everything about Irish rugby looks on the up though. The great production lines of the Dublin private schools continue to turn out brilliant player after the brilliant player. All four provinces are in good health. And Johnny Sexton (above) continues to defy age and will lead Ireland on a summer tour on New Zealand and into next autumn’s World Cup.

Ireland even has a decent chance of beating the All Blacks over three tests. The Kiwis are no longer the dominant force in world rugby. These are salad days for Irish rugby.

But one small doubt remains. In the really tough moments, is this team capable of finding the reserves to win? Beyond Sexton, do they have the mental fortitude to come back against the All Blacks, or the Springboks, or the French? We’ll only know the answer to that question after the World Cup. But the difference between failure and glory may lie in the muscles of a 36-year-old Sexton.

It’s also worth noting that in the Women’s Six Nations, Ireland recorded their first win this season, beating Italy 29-8 in Ireland. Unlike the men’s game, here England are the dominant force. The women’s game is growing in Ireland, although titles are still along way off.