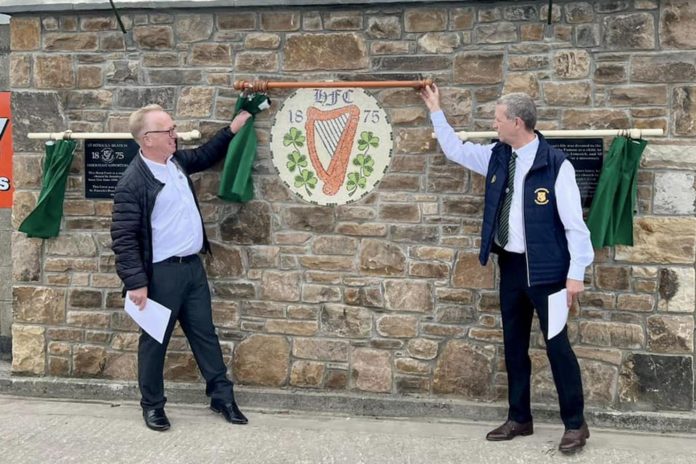 A COMMEMORATION to honour Hibernian FC’s co-founder, Canon Edward Hannan, in his native Ballingarry in Limerick was finally held at the end of last month after having previously been postponed by the Covid-19 pandemic.

The event to honour Canon Hannan—who along with Roscommon-born Michael Whelehan, founded Hibernian Football Club—saw the unveiling of two plaques and the installation of a replica of the mosaic harp crest that once adorned the exterior of Easter Road and which helped end the club’s Scottish Cup hoodoo.

Organised by the St Patrick’s Branch of Hibernian Supporters, a group of fans alongside Non-Executive Club Director Stephen Dunn, travelled to the Limerick town, to witness the installation of the permanent memorial at the Paddocks Stadium, home to Ballingarry AFC.

As part of the commemoration the two sides— Ballingarry AFC and Hibs—swapped pennants, the local team took on Rathkeale AFC in a match, the local parish priest, Fr Tom Carroll, blessed the memorial, while Director Dunn also gave a special speech alongside John Cronin from Ballingarry AFC and Dougie McLeod from the St Pat’s Branch.

A commitment was also made that Ballingarry AFC would be able to visit Hibs to help with the development of their youth structure and strategy.

“It was an honour to take part in this event,” Stephen Dunn said. “As we come to our 150th anniversary it is fitting that we recognise those who established the club, but more, the work Canon Hannan did in his parish to look after the poor. He can only be described as a humanitarian.

“He also helped create a club cherished around the world, and for that we are eternally grateful. The events also allowed us to establish links with Ballingarry AFC, a progressive amateur side in the county with an impressive ground and facilities and an underage set up similar to ours.

“We will be pleased to help them develop this structure as we move forward.”

Ballingarry AFC were delighted to link up with the Scottish Premiership side and a club representative spoke of their excitement at the new connection.

“We are also delighted to announce that the clubs have agreed to a partnership to team up to recognise Hibs 150th anniversary in two years time, when an event will be held in Ballingarry to mark the milestone and also a commitment has been made by Hibernian Football Club to help with our underage structures within the club.

“These are very exciting times for the club and can’t wait to see what the future holds. A huge thank you to the people who made this happen and it further proves the amazing people we have in our club.”

A spokesperson for the St Patrick’s Branch of Hibernian Supporters added: “The commemorative event to honour Canon Edward Joseph Hannan in Ballingarry County Limerick, was beyond words. A sincere thank you to all who organised and attended and special thanks to all the good folk of Ballingarry, Ballingarry AFC, Stephen Dunn and the Hibernian FC Board.”