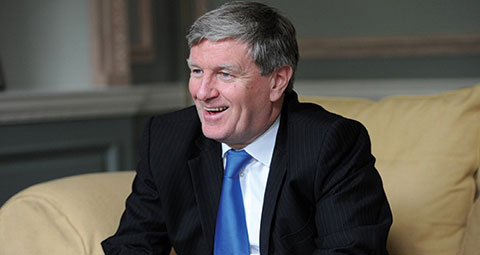 IRELAND’S outgoing Ambassador to the UK, Dan Mulhall, spoke in Edinburgh about the future of Scottish-Irish relations after Britain completes its negotiations to leave the EU, and addressed the Irish community in Britain directly about how the withdrawal will affect them.

Looking back on the history of Scottish-Irish relations—and using his insight from his spells as Consul General to Scotland and Ambassador to the UK—Mr Mulhall (above) spoke of his hope for the future and of the challenges that will emerge in the coming years.

Identifying the changing dynamic both within Scotland and between the two countries as an obstacle which will need to be overcome, Mr Mulhall nevertheless promised the commitment of the Irish Government to maintaining the fruitful relationship which has been built over the last two decades.

“As for the future of Irish-Scottish relations, as with the Irish-UK dimension, these will need to be conducted in a different setting,” Mr Mulhall said. “Our aim will be to keep our ties on the same positive path they’ve been on these last 20 years. We will seek to continue to trade actively and to maintain good political dialogue. People to people links and cultural affinities will also continue to draw on the many similarities between us.

“Scotland’s future is of course something that can only be settled here. Come what may, Ireland will continue to be a friend of Scotland. We understand, and sympathise with, the situation in which Scotland finds itself. I expect, however, that we will continue to watch developments here with great interest while refraining from comment or intervention of any kind.

“There clearly are lots of similarities between Ireland and Scotland and there are also areas where our experience and circumstances differ. There will be those on both sides of the Scottish debate that may seek to draw lessons from Ireland to bolster their arguments. Our experience is there to be examined, but it is not for us to interpret its relevance to others.”

Mr Mulhall also referred to the campaigning undertaken by Ireland to help convince the UK to remain within the EU, and how—despite the need for a mutually beneficial relationship between the two nations—Ireland must now focus on dealing with the consequences of Brexit from the other side, in partnership with the other remaining EU nations.

“Our Government rightly took a vow of silence on Scottish issues in the run-up to the referendum on the very good grounds that this was a domestic Scottish issue in which it would be impertinent of us to intervene,” he said.

“We took a different view during last year’s EU referendum, because the EU is a Union to which Ireland belongs and we wanted our nearest neighbours to remain part of that unique community of European nations. Sadly, that was not to be and our task now is to manage the consequences of the UK’s exit from the EU.”

The address also provided the opportunity forMr Mulhall to speak about the role of the Irish consulate in Edinburgh during the past 20 years. As the serving Consul at the time the consulate was established, he has a unique insight into how the functions of the Consulate have changed, and now—with Mark Hanniffy as Consul and Anne-Marie Flynn and Vice-Consul—the diplomatic mission in Scotland is well-placed to enter a new and important phase.

“Since the opening of our Consulate, Scotland has become an established part of the St Patrick’s Day circuit for Irish Ministers who travel the world promoting Ireland,” Mr Mulhall reflected. “I have personally been involved in two substantial visits to Scotland by Irish Presidents, President McAleese in 1999 and President Higgins last year. Ministerial visits in both directions are now a regular feature and First Minister Sturgeon was warmly welcomed in Dublin last year when she was invited to address our Seanad—a rare honour for visiting politicians.

“Irish people took a keen interest in the referendum in 2014, which received substantial coverage in the Irish media. This reflects an enhanced awareness of Scotland and of its relevance to Ireland.

“We have come to know Scotland, and the Irish community here, better in recent times. This is part of a growing Irish engagement with our global diaspora. We now have a dedicated diaspora minister and an agreed government policy on the subject. As part of this process of engagement, we have become more conscious of the global spread of Irish emigrants and their descendants, and the diversity of their experience.

“We know that the Irish came to Scotland in large numbers in the decades after the Famine and that things were not always easy for them. Today, perhaps up to 20 per cent of the population of Scotland has an Irish background and our community is very much part of the fabric of modern Scotland. Their presence in every walk of Scottish life gives us a special connection with this country.”

Ahead of his transfer to America, where he will serve as Ireland’s Ambassador to the US, Mr Mulhall extended his words of support and reassurance to the Irish community across the rest of Britain with the publication of an open letter, in which he highlighted the efforts being taken to put the Irish community in Britain at the heart of Ireland’s negotiation strategy.

“It has always been clear that the UK’s departure from the Union will have significant economic, political and social implications for Ireland,” he wrote. “Accordingly, the Irish Government has been preparing extensively for the negotiations between the UK and the EU. Since June 2016, there has been a comprehensive programme of engagement with our European partners and EU institutions to ensure an awareness of Ireland’s unique circumstances and the need to address these in the negotiations.

“Minister [Charlie] Flanagan has had over 100 engagements since the referendum including with every Foreign Minister in the EU and with the Commission negotiating team led by Michel Barnier.

“Visits from Irish Ministers to Britain to meet their UK counterparts and Irish community organisations continue to take place on a regular basis. In these meetings, the status of the Irish community in Britain continues to be an important topic. We remain committed to ensuring that the interests of the community are heard.”

Despite preparing to move on, Mr Mulhall remains very active in his position and encouraged those with concerns about any issue arising from Brexit to contact the Irish Embassy.

“At the Embassy, we will continue to maintain close contact with the Irish community all over this country,” he concluded, “and I am open to hearing from you about any concerns that may arise in the period ahead.”