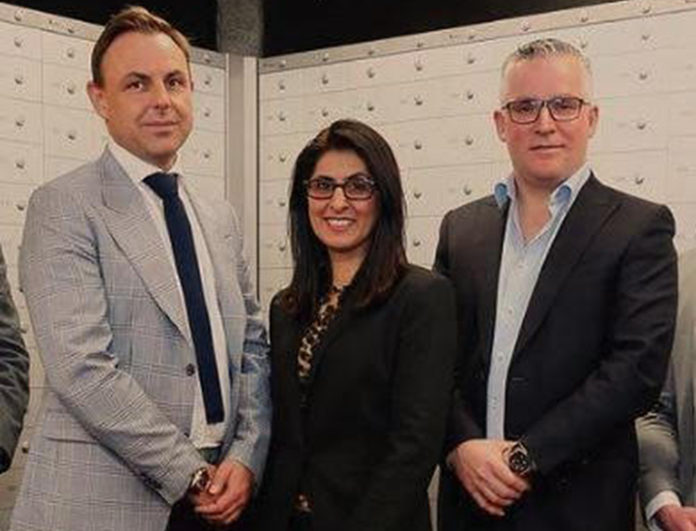 SCOTLAND’S first-ever safe deposit company is celebrating a year of trading in its Edinburgh premises.

Since the launch of Glasgow Vaults in Glasgow—which was officially opened by First Minister, Nicola Sturgeon—the parent company, Dublin based Merrion Vaults, has spread its reach around the UK.

Edinburgh Safe Deposit opened its prestigious, but discreet, premises in Atholl Crescent only to be closed for lockdown. Reopening when restrictions allowed, with limited opening hours, the facility quickly established itself in the city that had worrying break-in figures.

UK General Manager, Nazia Ramzan (above), a holder of The Scottish Asian & Business Awards, Rising Star of the Year accolade, said: “I have been with the company since 2015, before the opening of Glasgow Vaults and we’ve seen a huge success story by focusing on customer demand. We opened Edinburgh in response to research we
conducted which found our customers were coming to Glasgow from all over Scotland.”

With the latest in surveillance systems, biometric eye scanners and digital photo recognition Edinburgh Safe Deposit offers unparalleled security. The price of peace of mind begins at a very reasonable £175 for the smallest size of box.

From family heirlooms, watch collections, cash and gold bullion to title deeds and passports the safe deposit boxes with 24-hour access are secured in purpose-built vaults.

Glasgow Vaults has provided a reassuring alternative to other options such as home storage. A spate of organised burglaries in 2019 saw the Asian community targeted because of their traditional practice of storing money and valuables at home.

With banks in Scotland phasing out safe deposit facilities, Limerick-born entrepreneur and diamond dealer, Seamus Fahy and his business partner, David Walsh, quickly spotted the gap in the market and Glasgow Vaults opened in 2016. Mr Fahy’s own search for secure storage service for Voltaire Diamonds was largely responsible for the idea.