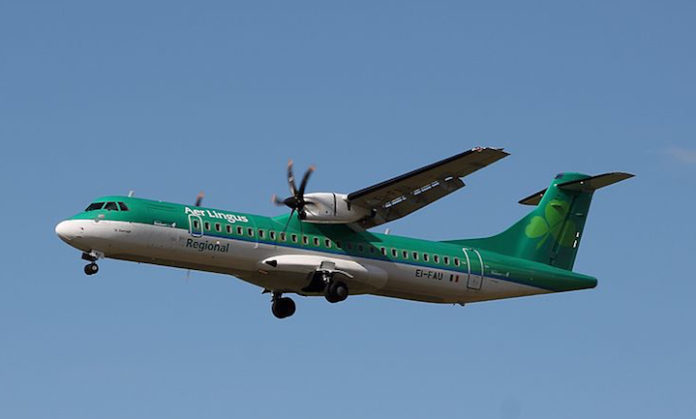 AER LINGUS recently moved to reassure Scotland’s Irish community after its regional flights were put in jeopardy when its franchise operator Stobart Air announced early in June that it was to cease flying with immediate effect.

“Aer Lingus will operate seven routes until at least the end of August 2021 and is progressing plans for services beyond this date, details of which will be announced shortly,” the company said. “BA CityFlyer has announced that it will operate four routes for the rest of Summer 2021 period.

“Travel on the remaining routes (Dublin-Kerry; Dublin-Donegal; Belfast-East Midlands; and Belfast-Cardiff) between now and at least June 27, 2021 is cancelled. Customers booked to travel on a cancelled flight can request a voucher for future travel here or a full refund here.

“Aer Lingus is ready to operate the Dublin-Kerry route, subject to an appropriate PSO arrangement being put in place. Aer Lingus is also actively exploring options that would enable the provision of a Dublin-Donegal service. Customers scheduled to travel on the Belfast City-East Midlands route before June are being offered alternative flights.

“Aer Lingus wishes to apologise to Aer Lingus Regional customers who have been affected by Stobart Air ceasing operations.”

Under the new arrangements, some of the Scottish routes that it was thought would be affected, will be operated by Aer Lingus (Mainline), while one other will be serviced by the BA CityFlyer. Aer Lingus (Mainline) will operate the following routes: Belfast-Edinburgh (daily service); Dublin- Edinburgh (five services per week); and Dublin-Glasgow (three services a week beginning July 19, 2021). BA CityFlyer will operate the following route until at least August 31, 2021: Belfast-Glasgow (beginning August 2, 2021—6 services per week).