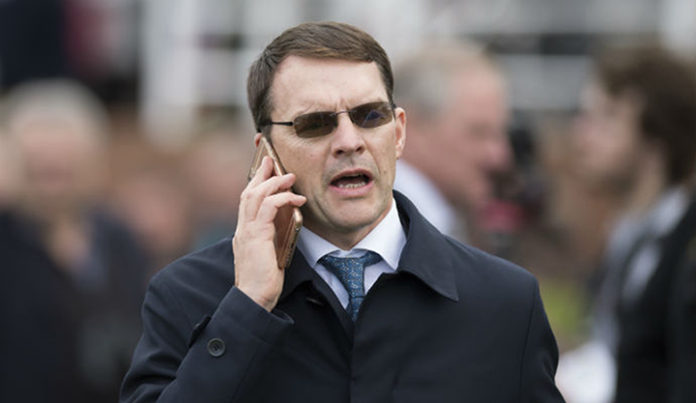 AIDEN O’Brien tasted success in the Vertem Futurity Trophy race at Doncaster recently, with the winner, Luxembourg, justifying the support that many of us had in him—not least the trainer himself. It was O’Brien’s tenth winner in the final Group 1 race of the British season, it was won with authority and Luxembourg is now favourite for next year’s Cazoo Derby at odds of 4/1. He’s also quoted at 6/1 to win the Qipco 2000 Guineas in 2022. By winning the Vertem Futurity race, O’Brien (above) also matched Sir Henry Cecil’s great record of ten wins. Luxembourg was bought for 150,000 guineas. What is his worth now? Well the sky is the limit. Roll on next year!

While some people think it hasn’t been a great year for the stable, this season Snowfall won The Oaks and St Mark’s Basilica starred for the trainer. This season he has had 18 Group 1 winners and has won seven classics. St Mark’s Basilica will go places and win many races. In fact, O’Brien was quoted as saying that ‘we haven’t seen the like of him since Galileo. We were lucky to find him.’

Joseph O’Brien must also be congratulated too as State of Rest won the Ladbrokes Cox Plate at Moonee Valley in Australia. It was a fair effort to take the horse out there as there were many restrictions and hoops to jump through in terms of travel. O’Brien had won the last four Melbourne Cups though, so well done to him on his latest win.

Irish trainer, Shark Hanlon, is due plaudits too for sending over Hewick to run in the Durham National. The horse won by more than six lengths over last year’s winner Red Giant.

It was great to see Gordon Elliott back at Cheltenham after his suspension and he also had a winner with Definite Plan landing the Three Mile Furlong Handicap Chase. I’m sure he’ll have many more winners this season.

Elliott’s stable had a great time at the recent Down Royal meeting too, with winners coming via Hollow Games, ridden by Davy Russell in the Irish Stallion Farms EBF Maiden Hurdle and Zanahiyr, ridden by Jack Kennedy, who won the Grade 2 WKD Hurdle. The trainer was very pleased with the performance of Zanahiyr, in particular, winning as he did by eight lengths. He has been cut in price from 50/1 to 25/1 for the Champion Hurdle at Cheltenham next year.

He followed this up with four more winners. There was Fildor in the Three-Year-Old Hurdle, ridden by Davy Russell. Then came Mighty Potter in the Tayto Group Maiden Hurdle, ridden by Jack Kennedy. Kennedy was also on the winner Eskylane in the Handicap Hurdle, while Jamie Codd won the National Hunt Race on American Mike.

In the Ladbrokes Champion Chase, his horse Galvin ran a good race, finishing second to Paul Nicholls’ horse Frodon, who won by three quarters of a length. This was a good run against a good horse that Nicholls has won with five times.

Brian Hughes had a five-timer at Musselburgh recently. He’s currently leading the British Jump Jockeys’ Championship, having already ridden 82 winners. His nearest rival is 35 wins behind him. So hopefully he’ll win the championship again this season.

Look out for two horses from Jessica Harrington’s tables, namely Ashdale Bob and Silver Sheen. Those two will win many races in future I’d wager. As always, good luck!