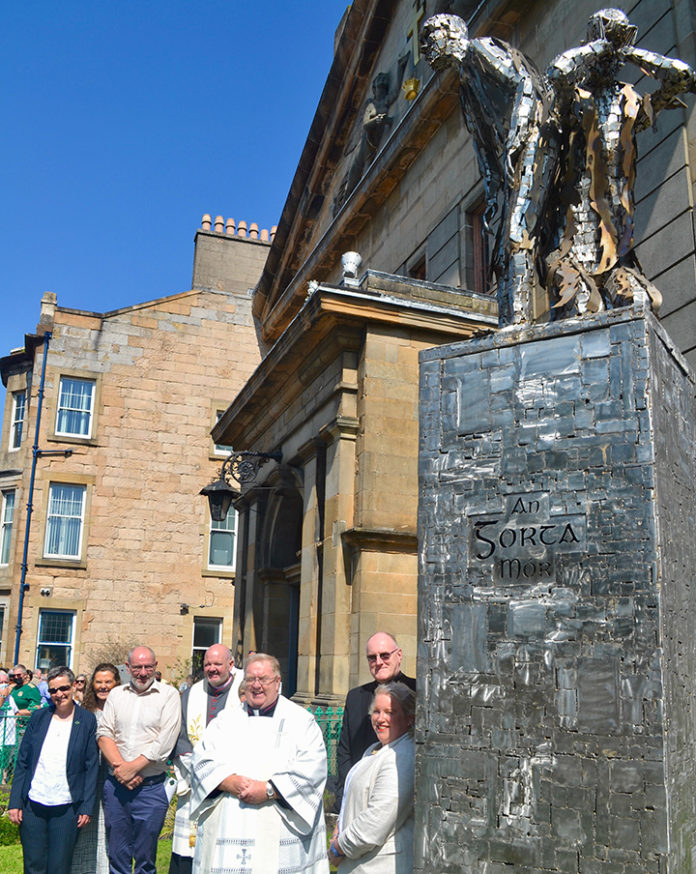 GLORIOUS Glasgow sunshine was the backdrop as the long-awaited memorial to An Gorta Mór was unveiled at St Mary’s Church in the city’s east end.

Throngs of Glasgow Irish were joined by members of the Irish community from further afield as the Coiste Cuimhneachain An Gorta Mór (The Great Hunger Memorial Committee) brought their long effort to a close with the emotional unveiling (above).

With more than 140 memorials to the Great Hunger around the world in locations where the Irish fled hunger, eviction and oppression, Glasgow’s lack of a fitting memorial had long been a source of frustration for the Irish community, but following obstacles and poor engagement the community—through Coiste Cuimhneachain An Gorta Mór— took matters into their own hands and worked to establish a memorial of their own.

Funded by the Irish community through events, donations and crowdfunding the necessary funds were raised to allow the installation of John McCarron’s Tower of Silence, and as it was unveiled the Irish community were urged to use it not only as a beacon of hope for what our community went through but also as a reminder to extend a welcome to present day immigrants.

Significance
Speaking just before the unveiling took place, Chair of Coiste Cuimhneachain An Gorta Mór Jeanette Findlay reflected on the significance of the installation of such a memorial.

“Why it took so long to reach this day is another story, an important story that speak to us about our current realities, but it is a story for another day,” she said. “Today is our day. The day of the children of those impoverished and brutalised people who managed to reach these shores, to finally see that part of our history, that terrible part, acknowledged and remembered in a physical and permanent way.

“So in that sense, while it is a time for reflection, it is also a time for celebration. They did endure, they did survive and in large part they did flourish in this city.

“They made that journey, dangerous in those times, in an effort to save themselves and their children. And in so doing, they people this city with their descendants. Still a minority, but now a confident, vocal and proud minority, who have kept alive—in whatever way they could—the music, the sport, the language and the history of their native land and their great love for it.

“The confident and vibrant multigenerational Irish community of Glasgow is the legacy of their endurance and bravery and today we remember them and thank them for that.

“Who can imagine what it must have been to leave behind the dead and the dying and, with almost no possessions of any kind, to begin to walk with their children to a port, in order to sail from a rural existence to a strange and industrial place, a place already scarred with poverty and inequality. I suppose the only people alive now who can really imagine that, are those in our city who have arrived more recently in escaping hunger, oppression and war in their own countries.

Tributes and blessing
With moving words from John McCarron about his motivations and journey in creating the memorial, and from Ireland’s Consul General to Scotland, Jane McCulloch, who spoke about the historical impact of the Great Hunger as well as the present day efforts by Ireland to fight hunger and poverty in other parts of the world, the memorial was finally unveiled before being blessed by Canon Tom White.

As parish priest of St Mary’s, Canon White had made a fitting space available at a time when the committee was struggling to find a location for the memorial, and as the crowd bowed their heads in prayer during the short ceremony he was following in the footsteps of earlier parish priests of the church who had ministered to the throngs of the Irish community there.

The significance of the day was clear to those in attendance, and despite Covid-19 restrictions limiting the opportunity for the hundreds there to inspect the memorial more closely, the final step in ensuring a permanent and fitting memorial to the Great Hunger will see Irish community return to reflect on the message it sends.

At Holyrood, the memorial was honoured by Paul Sweeney MSP, who lodged a motion saying: “That the Parliament congratulates the Coiste Cuimhneachain An Gorta Mór (The Great Hunger Memorial Committee) on the successful unveiling of the memorial to The Great Hunger of 1845-1852, remembers the struggles and sacrifice made by those from Ireland who sought refuge in Scotland and commits to welcoming all who seek to call Scotland home regardless of race, religion or ethnicity and resolves to strengthen the fraternal ties between Scotland and Ireland.”

With those ties growing closer every year, Consul General Jane McCulloch has been at the heart of a crucial relationship, but in her words she also looked back to the tragedy of the past and underlined the need for remembrance.

“More than 170 years ago, the darkness of the famine in Ireland precipitated a collective trauma for the Irish people,” she said. “In successive generations it has cast a long shadow on the Irish around the world. In 1840, following a century of growth, Ireland was home to eight million people. In the space of a decade, one million would die of hunger and of related diseases. A further two million left Ireland, destitute and with nothing but hope to carry with them. As shocking as these numbers remain, despite our familiarity with them, they are not simply numbers. They are all harrowing individual tragedies.”