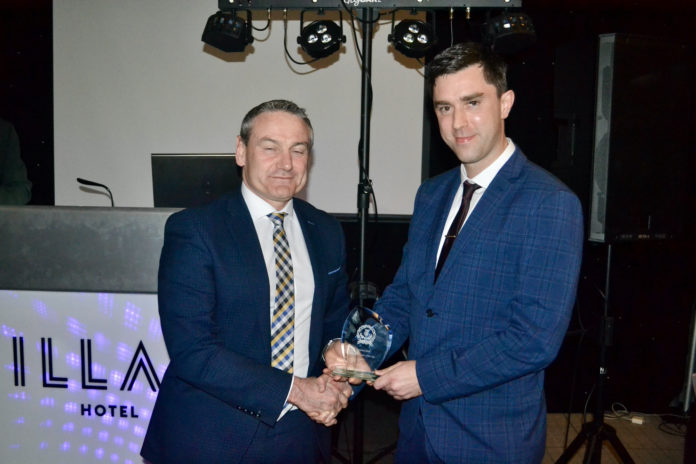 SCOTLAND GAA used the recent 125th anniversary event platform to present three Annual GAA Awards that acknowledge the work being done by our volunteers at Club and County level.

The three winners for their commitment to the GAA activities were Ronan O’Donaghue (Ceann Creige, above) as Manager of the Year 2021 whose newly launched Hurling team in 2021 played—and won—their first competitive fixture in Scotland since 1913 (Glasgow had excellent Hurling teams in the early years of the 20th Century). Ronan McCann (Referees Co-ordinator) was named 2021 County Volunteer of the Year, for his exceptional commitment towards ensuring there were referees to cover every Scotland Club fixture—and often with personal sacrifice as they often clashed with his ambition to play. Club Volunteer of the year 2021 was Suzanne Dillon (Dunedin Ladies) who, for more than 20 years has showed the most amazing commitment to club—and county—matched only by the successes of Dunedin Ladies which included participation in an All-Ireland Junior Final.

We also acknowledged the first Scotland GAA Scor Awards—run for the first time in 2021—and that is a reflection of where we are now and where we want to go. It aligns our cultural to our sporting element and it was led by Shaun McBride, Irish language Officer for the Scotland County Board, and Jarlath Burns presented the award to the Scor Quiz winners from Dalriada GFC, Johnny O’Flaherty, Alan Camon, Cathal Gallen and Killian O’Dwyer.