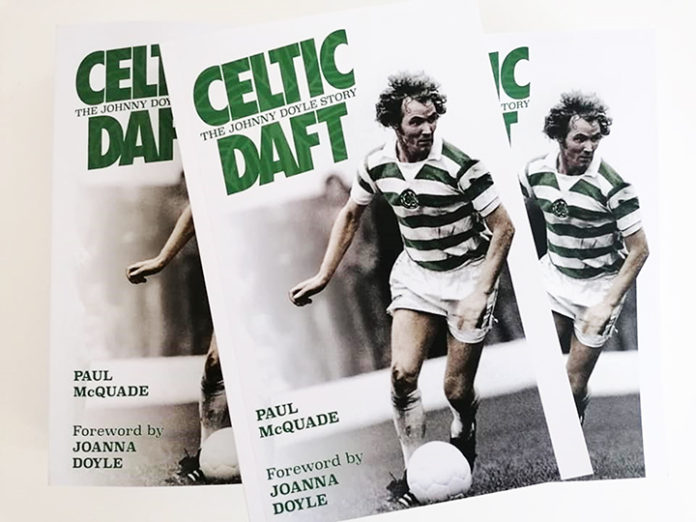 THIS year, 40 years on from his tragic death, a brand-new biography of the much-loved Celtic player Johnny Doyle—entitled Celtic Daft: The Johnny Doyle Story—has been released.

Johnny—who came from a Celtic-supporting family in Viewpark, Lanarkshire—had to be persuaded to give up his local supporters’ club membership following the Lisbon Lions all over Scotland to try and become a professional footballer. He honed his talents playing street football alongside future Scottish internationalists John Robertson and Iain Munro and local hero Jimmy Johnstone had more than a small part in pushing Johnny towards a career in the beautiful game.

Under Ally MacLeod’s supervision at Ayr United, during the club’s most successful-ever period in the early-to-mid 1970s, a teenage Johnny went on to win international honours before Celtic spent a record fee to take the flying winger to his spiritual home.

He was one of Scottish football’s most controversial and memorable characters with a sense of injustice which often brought him into conflict with referees and opponents too.  His on-field persona earned him a fiery public image which was at odds with the reality of a family man renowned for private acts of kindness and relentless pranks.

The idea for the book first came about at a Celtic Graves Society commemoration for Johnny in October 2011. His daughter Joanna, who has written the foreword, kept the idea alive and in 2019 she approached Paul McQuade, editor of the Celtic retro fanzine The Shamrock and author of the books Said Lizzie to Philip and This is How It Feels to Be Celtic, who agreed to undertake the project.

“Research and writing took over two years with the family’s archive of memorabilia yielding previously unseen information about Johnny’s life and career,” Paul said. “Interviews with Johnny’s family, friends, playing colleagues and fans of both Ayr United and Celtic helped provide a wide range of memories and perspectives of a footballer whose skill and commitment on the field earned him an army of followers and whose much-professed devotion to Celtic—long before he joined his boyhood club—guaranteed that controversy would regularly follow in his wake.”

As well as expressing her excitement to The Irish Voice at the beginning of the project back in September 2019, Joanna was hoping that the research would help unearth a recording of her late father’s voice as it was something that she had no recollection of. This came to fruition in March 2020 when RTÉ archive footage allowed her to hear Johnny speak on camera, something she described as ‘amazing’ at the time. The response to the new book has also amazed Joanna, with orders coming in from all over the world and she is delighted that the book has now been published.

“This is a book written by the fans for the fans,” Joanna said. “The fans input has been monumental and as such has not only made the book possible, but has made it something extra special too. The bond between my dad and the Celtic support was phenomenal so it was paramount to us that they were part of this book. For that we thank you from the bottom of our hearts.

“Paul has worked tirelessly on the book and there have been orders from Germany, Thailand, San Francisco and Ireland in the first day of its release, which was fantastic.

“To the man himself—dad—you always were and continue to be my hero. Your energy and presence are missed terribly, but will never be forgotten. It took some time, but we have done it. You deserve this. I love you so much.”

Celtic Daft: The Johnny Doyle Story is littered with images, characters and moments from an altogether different era in Scottish football including Jock Stein, ‘Mohammad Ally’ MacLeod, the 4-2 game, Tommy Burns, mysterious German intermediaries, Billy McNeill, the Hampden Riot, a sweaty Frank McGarvey, victory over Real Madrid and a dazed and vengeful referee at Somerset Park.  As his great friend Burns said: “He was an outrageous man but had a heart of gold and made friends everywhere.”

“Everything was green in Doyley’s world!” former teammate and Celtic goalkeeper, Packie Bonner, recalled. “From his car to his curtains to his beloved cockatoo that he taught to verbally abuse his Rangers-supporting pal Hughie whenever he came to visit the Doyle family home. Johnny Doyle wore his Celtic scarf on the first-team bus and his heart on his sleeve whenever he appeared in the Hoops. He forged relationships with hundreds of individual fans because he regularly gave up his free time to attend Celtic supporter functions all over Scotland and the personal memories that he left behind have fuelled the Doyle legend since his sudden death in October 1981.”

The book is on sale at The Shamrock website: www.the-shamrock.net