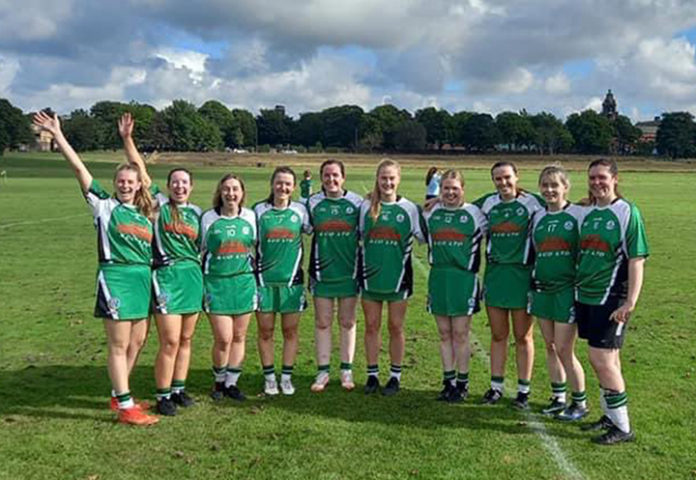 IT’s been yet another busy month for Ceann Creige Hurling and Camogie Club.

As a new school year started, the club was delighted to restart its schools programme. This has involved both curriculum and after-school sessions and is helping to boost numbers at the youth session on a Thursday night. Over the September weekend, another youth hurling camp was held, which, as before, consisted of some of Ceann Creige’s members, shinty players and complete beginners. The club are hopeful that this will boost numbers like the last camp that was held during the summer.

Some of the younger club members recently took part in an outdoor weekend, which gave them the chance to improve their team-building skills, while at the same time having fun trying such activities as abseiling, raft building, crate stacking, archery and much more.

Meanwhile, the Camogie team (above) travelled to Liverpool to play a challenge match against Liverpool Wolfetones and won a hard-fought contest by a scoreline of 8-07 to 5-09.

“Massive congratulations must go to our ladies for this result,” a club spokesperson said. “It was a tough match, with some fantastic play from both teams. Thanks to Liverpool Wolfe Tones GAA for hosting.

“We are currently awaiting details of the autumn league, so we are looking forward to getting some more games over the months ahead. We are always looking for new players too, regardless of whether or not you have played before and equipment is available.”

Ceann Creige’s men’s team were also in action, playing an internal game recently at the Clydebank Community Sports Hub (below), which gave the ever-increasing squad the chance to get more practice in before they welcome Douglas Hurling team from Cork this month for a challenge match. The club is hoping to invite more teams over in 2022.

In recognition of the continued growth and success of the men’s side, five of their hurlers were selected to play for the Rest of Britain team to play against London GAA recently, as part of the latter’s that 125-year anniversary celebrations. The players selected were Ronan O’Donoghue, Shane Nugent, Steven Treacy, Brian Slattery and Jamie McFadyen. Despite their best efforts, London won the contest by a scoreline of 2-20 to 2-12.

Ceann Creige promises that there will be a lot more happening before the end of the year, so keep an eye on their social media pages for more details.