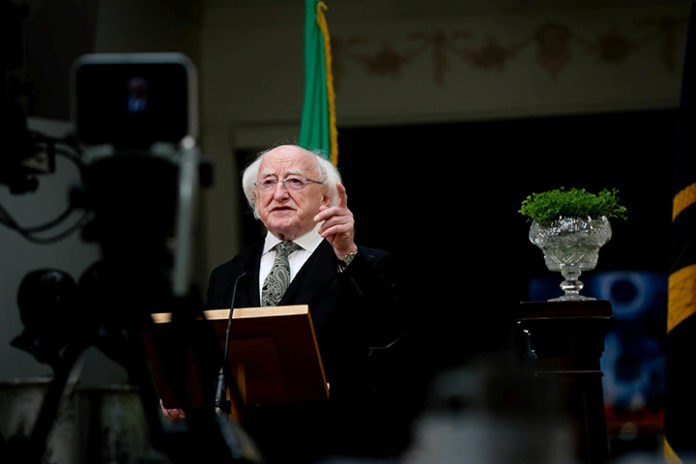 DESPITE a second restricted St Patrick’s Day, celebrations took place across the country as the Irish community in Scotland overcame the challenges of Covid-19.

Gathering online and swapping the usual street celebrations for digital events, the events in Scotland mirrored those around the world and in Ireland, with Irish communities making the best of the limitations of the virus.

With hope now growing that such restrictions will become and thing of the past and that future celebrations will return to their normal form, the continued sacrifices were made as families, friends and groups resisted the temptations to socialise and the major festivals in Scotland turned their focus to the safe ways of marking St Patrick’s Day.

In Scotland, the festivals in Coatbridge and Glasgow each used their networks to pull together programmes of events which, although much diminished for their usual festival schedule, managed to keep spirits high as the second St Patrick’s Day in a row was hit by restrictions.

Global Greening
In Dundee, Caird Hall and the V&A Dundee each turned green for St Patrick’s Day, while in Glasgow the Kelvingrove Museum and Art Gallery also joined the ‘Global Greening’ as sites around the world were lit up in Ireland’s national colour.

The Scottish sites were part of an effort which saw monuments and iconic buildings from Budapest to New York and Sydney to Monaco turned green in celebration—an effort which saw nearly 700 locations around the world used in some 66 countries.

Given the limits put on celebrations, this year’s Global Greening formed a larger part of celebrations than normal, and Niall Gibbons, CEO of Tourism Ireland, shared his hopes that it would act as a beacon for those who have been waiting patiently to return to Ireland.

“This year, in particular, we aim to bring some positivity and hope to our diaspora across the globe,” he said. “More than 70 million people around the world claim links to the island of Ireland and St Patrick’s Day is a truly unique opportunity to reconnect them with their heritage. At a time when Irish people overseas cannot travel home, we want to shine a green light in as many locations around the world as possible, giving our diaspora a sense of connection with home and reminding them that we cannot wait to roll out the green carpet and welcome them back, as soon as it is possible to do so.

“This year, against the ongoing backdrop of Covid-19, our St Patrick’s Day programme around the world is more important than ever before. During this challenging time, we want to mark St Patrick’s Day and to keep Ireland to the fore in a positive light, on the day when people everywhere are thinking about Ireland.”

In Ireland, large festivals such as those in Cork and Dublin could not take place, but RTÉ hosted a virtual parade and online events were co-ordinated around the country to give viewers something to celebrate.

President’s address
President Michael D Higgins (above) also spoke to the the global Irish in his St Patrick’s Day address, remembering the importance of the feast to the Irish people around the world and using the journeys undertaken by St Patrick to call for 2021 to be a new beginning for Ireland.

“Patrick arrived in Ireland as a slave, escaped and returned,” he said. “He is of the stock of our early foundational Irish migrants, which anticipates our monastic messengers, our 19th-century emigration prior to the Great Famine, and the haemorrhage of our people who managed to flee for survival in post-Famine times.

“In 1901, of all the Irish born on the island of Ireland, a majority lived outside of the island of Ireland. Saint Patrick’s Day, then, must always be a special day for recalling our migrant history and learning from it, be a source of our ethics and of our policy at home and abroad.

“In this year, no doubt, there will be pain. While there will be a recall of journeys remembered, there will be the disappointment of journeys anticipated but now, necessarily, postponed. Our hearts must be with those many for whom a technological alternative is an insufficient substitute for touch or intimacy.

“When in the future we recall Saint Patrick’s Day 2021, let us have returned with even more energy to music as we lift the glass slowly, and replenish it even slower.  Music and creativity were our resource in the pandemic, and in the music of the heart is rehearsed that for which words are insufficient, feídearachtaí ag heitheamh dúinn—forms of renewal, possibilities rehearsed, journeys to wonder and new places.

“On behalf of the people of Ireland, I extend a hand of friendship across the globe to all those who are Irish by birth, descent or association, and to all those who have assisted our Irish people, especially over the past year. I wish you, and all those who form part of the Irish family, and its friends in the families of the world, a happy and peaceful Saint Patrick’s Day.”

Gatherings
Despite the restrictions in place, there were still reports of outdoor gatherings in public parks in both Glasgow and Edinburgh, and despite recent events which would suggest that Police Scotland would not work to break up large outdoor gathering those who had assembled were encouraged to disperse.

Thankfully, however, common sense prevailed and officers were able to rely on appeals to revellers to act in accordance to the rules and no fines were issued or arrests made.