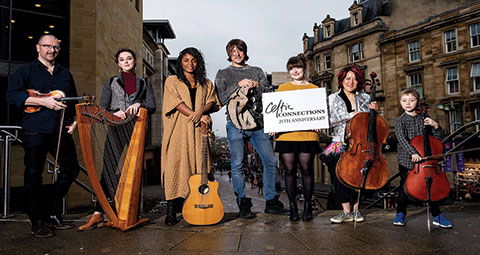 CELTIC Connections announced their line-up for their 25th annual festival, with a particular Irish flavour in the 2018 edition with Ireland also having been unveiled as the nation chosen as Showcase Partners by organisers.

The usual ambitious and wide-reaching selection of artists have been invited to participate, but the city’s Irish community will be more attracted than ever to the event by the fact that some of the best emerging Irish acts will be taking to the stage.

Announcing the 2018 partnership with Ireland, festival organisers said: “Each year, Celtic Connections partners with a country to help create new international links and advance opportunities for their musicians.

“For 2018, Ireland is the selected country and Celtic Connections is working in partnership with Culture Ireland to present both leading and emerging Irish artists at the festival. The Irish acts who will perform at the leading music industry event that is Showcase Scotland are Aoife Scott, Daoiri Farrell, Wallis Bird, Notify, Young Folk and Lorcán MacMathúna.”

The relationship with Culture Ireland also brings with it the chance to further explore the musical links shared by Scotland and Ireland, with Irish artists having been an ever-present through the 25 years of musical collaboration.

Speaking earlier this year when the partnership with Ireland was announced, Donald Shaw, Artistic Director of Celtic Connections, recognised the natural link the festival has with Ireland.

“An international partnership between Celtic Connections and Ireland feels like the most natural thing in the world, like friends coming together to make and enjoy music,” he said. “There’s such a clear affinity.

“This partnership, which is being realised with Culture Ireland, is also an exhilarating prospect. It creates exciting new opportunities to bring leading Irish musicians and bands to Celtic Connections 2018; opportunities to celebrate shared traditions and ambitions, and to discover new facets to a musical relationship that has grown over a quarter of a century.”

Organisers and supporters of the festival, however, were also keen to remind those who make their way to Glasgow that the 25th anniversary and the global nature of the line-up will make Celtic Connections 2018 an event not to be missed.

“Celtic Connections has been a leading light in Scotland’s cultural calendar for 25 years and I would like to wish them a very happy 25th anniversary,” Councillor David McDonald, Chair of Glasgow Life, said. “Since its modest beginnings Celtic Connections has firmly established itself as a destination of choice not only for lovers of folk and traditional music but also for anyone who wants to embrace outstanding music from across the world.

“Every year audiences from around the world also flock to Celtic Connections, some who have attended every year since the festival’s inception. We look forward to welcoming these audiences back to our city in 2018 and the outstanding musical talent we’ve come to expect from this globally-renowned festival.”