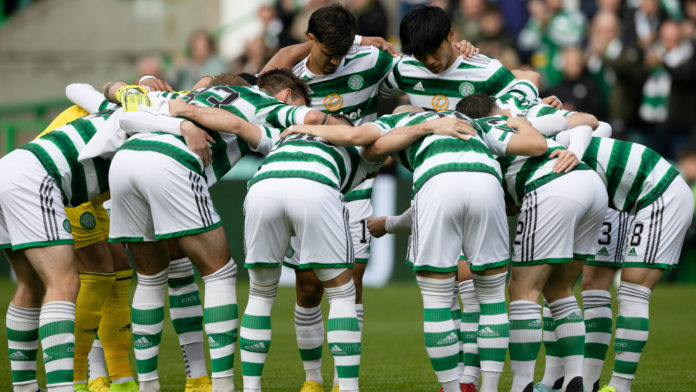 CELTIC’S run-in to the unusual winter break caused by this year’s World Cup Finals in Qatar—where the normal rules of sport and human decency appear not be applied—continued with a rather nervy 2-1 home win over Motherwell, and manager Ange Postecoglou hailed the performance as an important one.

Coming on the back of a disappointing away defeat at St Mirren and before an important away tie in the Champions League at Leipzig, the Celtic side were under-strength to start with and even further weakened after the sending off of captain Callum McGregor.

Nevertheless the home side managed to secure the three points and retain their space at the top of the table. Ahead of them lie Champions League opportunities and the chance to take an extended mid-season breather, with their visit to Germany coming as The Irish Voice goes to press.

Whatever happens in the European campaign, the league remains the priority, but back-to-back home matches, against RB Leipzig and Shakhtar Donetsk raise the tantalising prospect of European football after Christmas should results go Celtic’s way.

It is on home soil, however, that a good few weeks can lay the groundwork for a successful season. Josip Juranovic and Joe Hart conspired to concede a preposterous goal and allow Motherwell back into the game after having taken the lead through Kyogo Furuhashi, but a second-half scorcher from Reo Hatate delivered the points and earned the praise of his manager.

Important win
“It was an important three points, particularly after the last result,” Postecoglou said. “It’s a funny old game—we created enough chances to win it comfortably, but a couple of self-inflicted wounds kept them in the game.

“But it was great character shown by the boys to see the game out and it was an important three points.

“It was a great [winning] goal, and Reo was unlucky with his strike in the first-half as well.

“We created chances but we just weren’t as clinical or sharp as we should have been to take them and put the game away. But all in all, it was important to win and we move on.”

“[The own-goal and sending off] are probably the two key moments in a defensive sense, but the flip side of that is that we hit the post a couple of times in the first-half, and we had a couple of really good opportunities that we should have put away and then the game was done and dusted.

“So you keep the opposition in the game by not taking your chances. Then a couple of lapses in concentration and they stay in it and it makes it a bit nervy at the end, but we got through it.

“It’s only the first game [in a run of] 13 so we know what the schedule is like, but we’ve worked very hard up to this point to get the guys ready for it and we’ll recover after today.”

Greg Taylor was one of several players returning from international duty and staring down the barrel of an ever more hectic schedule of matches, and he spoke after the match about the importance of banking the results and moving on the next challenge.

“It was good in spells but we got a wee bit scrappy at points, probably their goal sums up the point I’m talking about,” he said. “The boys hung in well and it’s an important three points.

“We have an important spell in a short period of time. Now it’s just about rest and recovery and that’s what we’ll we do and thankfully we got the three points but we know we can be a lot better than that today.”

“[Reo’s goal] came at a good time at 1-1 because we were trying to probe and get the next goal and we managed to do it with a great strike and it was important.

“I think we had chances, certainly in the first-half, but when you’re only 1-0 up and you don’t manage to get the second then this can happen.

“It was a good goal from Reo to put us into the lead and thankfully we managed to hold out from there.”

Challenges ahead
With a host of players missing during this important period for Celtic, results will matter more than performances, but fans will still be concerned about the levels shown against St Mirren and Motherwell. While the context is still important—St Mirren are the only side to have defeated Celtic on league duty in over a year—the reality has shown that while Celtic have depth in their squad it is a particular kind of depth.

Rotating players and making suitable changes in the second half of games Celtic have shown they have the best squad in the league and are maximising the assets at their disposal, however when that depth is called on from the first minute of a game against sides who now see Celtic as the team to beat, there appears to be a lack of intensity and lack of dominance.

It is a testament to Ange Postecoglou that he has built such a strong First XI, and when big players are unavailable there is naturally a drop in performance, however no side comes through a season without facing challenges from injury and suspension. In this crucial period leading up to the World Cup hiatus, the Celtic support are looking to their manager with great faith once again, in the hope that just as he moulded a winning team from the messy squad he inherited last season so too will he weave his magic this season and drive Celtic to even greater dominance at the top of the table.