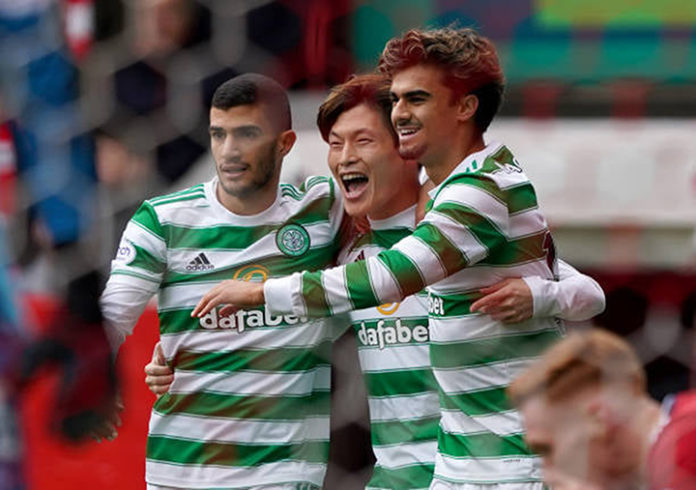 CELTIC go into the second international break of the season with a battling away victory at Aberdeen to show for themselves after an effort to halt a distressing slump in form since the last.

The club will hope that this round of international fixtures will be kinder to them, with injuries to players on duty with their countries derailing some promising early Celtic form as the gaps in the squad showed the extent of the personnel problem.

The gaps in the squad were not the only worrying cracks at Celtic, with a gaping defence in the unfortunate run of matches showing the downside of the new brand of football that had earlier delivered such emphatic performances

Challenges and concerns
The style and system of the Celtic manager are clearly elements that will provide uncomfortable moments for the Celtic support along the way, with the commitment to employing so many resources in attack leaving opposing teams with more opportunities than they are used to creating against Celtic.

Stubbornness, too, looks to be a characteristic of the manager—something which could be a strength in leading a rebuild of a playing squad that has been drastically altered since the successful heights of recent years, but which could also prove the biggest threat to that rebuild should familiar flaws persist and cost Celtic points.

Whatever the manager and whatever his vision, if results don’t follow at Celtic there is only ever one ending—however protracted last season’s saga became.

That said, there are hints of a new identity at Celtic and evidence of a bond amongst the players and manager and crucially, a link with the supporters, as shown by the scenes at the end of the Aberdeen match. Such shared emotion does not diminish the reservations many have, but it does show that amongst the travelling support there remains a tremendous goodwill towards Postecoglou and desire to see him succeed. If he can continue to deliver results at venues such as Pittodrie then that support can grow. If the hard-fought victory in Aberdeen proves to be a mere flash in the pan, though, the questions will remain and the answers will be harder and harder to provide.

The most telling pressure on the manager remains the playing squad at his disposal, with injuries and staffing issues continuing to limit his ability to put his plans into actions effectively.

Whatever the view of his approach, the fact remains he was brought to the club having earned his reputation by such a philosophy, and if that was the man the board of Celtic selected for the task then he should have been provided with the tools to do the job effectively.

At this juncture, it must be noted that this vitally important component for a club’s success remains missing. January will be a telling point in Celtic’s season.

Character and belief
Despite all that, the victory in Aberdeen (above) was a rare moment to enjoy in recent weeks and Postecoglou did. After celebrating with supporters he spoke about what the result showed about the character of his side and the belief his charges can start to build on.

“I’m pleased for the players and staff, and particularly our supporters as we knew today was going to be an important game for us for a number of reasons,” he said. “We obviously had a disappointing night on Thursday [against Bayer Leverkusen], and we know our troubles in the league, particularly away from home, so with all those factors, and even the manner in which we did it, I thought the players showed tremendous character at 1-1, not to settle for that, and to try to get the winner and I’m really pleased they got their rewards.

“It’s important, because there’s no doubt this year we’ve played some good football, but probably the one thing we haven’t shown is that when we needed to get ourselves out of a hole or whatever situation we’ve been in, we’ve struggled to do that.

“So I think the players will get tremendous belief out of today. It’s not an easy place to come and win. They were desperate for points, throwing everything at us, so, as I said, we had to show real character.”

Praise
With the goals coming from two of this season’s signings in Jota and Kyogo, Postecoglou reserved some praise with them—along with an out-of-form David Turnbull, the youthful Adam Montgomery and his fellow Australian Tom Rogic.

“To be fair to Tom and David Turnbull, they’ve carried a tremendous load since the start of the season because we just haven’t had the options in midfield, so I think freshening up Tommy a little bit today helped him,” the manager said. “He’s still a fantastic player, he sees things that others don’t and he played a great ball.

“Monty was outstanding as well and showed composure in the final third where he knows we need a winner and I thought he did tremendously well. Kyogo’s always a threat in every game he plays and he causes problems, but we can’t just have one avenue for goals and so far we’ve been pretty good.

“That’ll help Jota to settle in, and again, he’s one we’ve just thrown in there, he’s played every game and he’ll welcome a bit of a break now and I’m super-pleased for him.”

Should Celtic gather after the international break with an injury free squad and some confidence from their victory in the Granite City they will have the chance to prove themselves in a run of fixtures which provides opportunities both in the league and in the League Cup. It will require a far stronger return to domestic action than the last time.