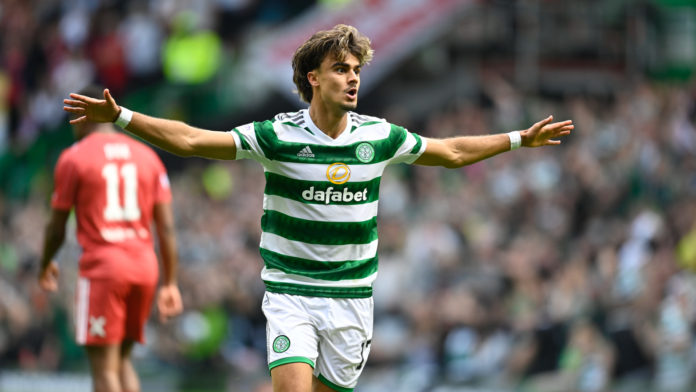 CELTIC began their new campaign in the same fashion as they finished the last—sitting at the top of the table.

A 2-0 win over Aberdeen was enough to secure their position, but it was the dominance they showed over a—relatively—big-spending opponent that gives cause for excitement among the green and white faithful.

The high stakes last season introduced an element of tension that wasn’t broken until the final fixtures when Celtic could reflect on a dramatic and rewarding campaign, one which saw a new team built by a new manager delivering success.

Now the Celtic support begin the year with a sense of expectation, knowing what the players can deliver and the aims the manager will set, and on the first day a strong performance was required.

Wastefulness?
There will certainly be questions over how wasteful Celtic were in front of goal, but while a greater winning margin should have been secured the performance served as a useful building block for the weeks to come.

That theme of wastefulness was one on which Ange Postecoglou reflected after the match, but he nevertheless highlighted the positives, singling out Cameron Carter-Vickers and goalscorer Stephen Welsh for their steadying influence.

“Overall, I thought it was okay,” Postecoglou said. “We were just a bit wasteful in front of goal and missed some opportunities that we really should have finished off. We’ve got goalscorers in our team from all over the park and I just thought we weren’t as decisive as we should have been.

“We started the game really well and the first half-hour I thought we were really strong and controlled the game. We got a bit slack in the last 10 minutes of the first-half and allowed them to get a bit of hold in the game, although they weren’t really a threat.”

“Stephen’s been great through pre-season and obviously with Carl [Starfelt] being out injured and Moritz [Jenz] only joining us late, he and Cameron have carried the load through pre-season so that’s been important for them to be playing well and be ready to go, and I thought both of them were strong today.

“We know Jota has that quality in him and he’s a fantastic talent but he’s one of the ones where I thought in the first-half, especially in the last 15 minutes, went away from what we do, and he needs to make sure that he’s always performing at the levels that we know he can.

“And I thought he addressed that in the second-half. It was much better and he scored a fantastic goal.”
Champions League ambitions

Jota’s strike (above) will already be a contender for goal of the season and having secured his signature in the summer transfer window, there will be high hopes that one of the club’s big money buys can show some of that talent on the biggest stage in the Champions League.

Celtic are in the enviable position of having already secured their place at Europe’s top table, but it will provide a greater test than the club has faced in some years. How far the Angeball project can go will be a question thrown into sharp relief when the super-rich elite of European football come calling at Celtic Park.

There is little room for emotion or sentiment in such competition. You either sink or swim, but given the dramatic overhaul Postecoglou led in 2021-22, it is a test well worth subjecting his side to.

Building on success
For now, the focus remains on starting well in the league championship, building on last season’s celebrated efforts.
Club captain Callum McGregor spoke about the quality Celtic showed against Aberdeen, but recognised the need to be more clinical in finishing chances if they are to deliver on their potential.

“We started really well and in the first 35 minutes showed some sharp and really intense football,” McGregor said. “We got a little slack towards the end of the first half but in the second half we had good control, and Jota scored a great goal just to seal it, but I thought we had good control of the game at that point.

“It was a terrific strike. We know he has that quality and it was worthy of winning any game.

“A lot of the play was good. We had good control, playing through the lines really well but maybe just lacking that little bit of sharpness in front of goal.

“It is early on but we want to keep drumming it into the players that when we get these kind of opportunities we try and put them away and be as ruthless as we can.”

The need for ruthlessness is not for nothing. McGregor had just received the honour of unfurling the league flag to open another season at Celtic Park, and he knows that if he is to get such an opportunity again he will need to drive his troops on for another long season.

“It was brilliant [to unfurl the flag],” he said. “I was super proud and I’m really grateful to the club for asking me to do it. You could feel the energy in the stadium—it was a brilliant moment.

“Now it’s down to business, so let’s see if we can go and do it again.”