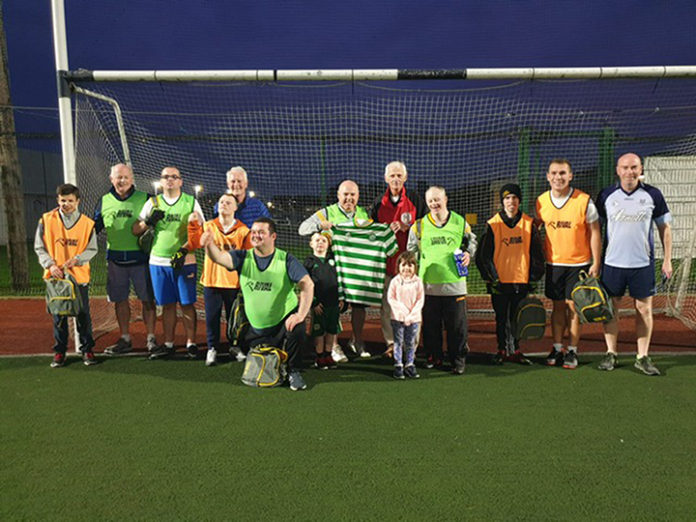 THE Celtic Trust delivered early Christmas presents to various organisations recently as a result of their fundraising efforts.

The trust—a supporters organisation established to represent the interests of small shareholders and supporters at Celtic—launched a fundraising campaign following the Celtic Board’s decision to turn down the trust’s shares for added value proposal.

Trustees suggested that the £50 vouchers—sent out by the club to season ticket holders who were unable to attend matches last season—would be better donated to those who might not otherwise be able to buy Celtic FC merchandise. The final total raised amounted to £6500 and has helped bring a smile to the faces of many children and young adults, and those running charities to look after them.

Naomh Mearnog GAA Club in Dublin were taken aback by the gesture, receiving £550, which allowed them to buy all their players a jersey, hat, scarf and bag. They expressed their gratitude in a letter sent to the trust where they gave greater insight into the club and the boost that this has given everyone.

“While we want to convey our thanks to all those individuals that contributed it is hard to articulate the excitement that the donations brought to our players,” the letter from Naomh Mearnog GAA Club said. “The club has provided an outlet for all those in our community in North Dublin who may require additional needs and seek a social outlet that is fun, friendly and inclusive while allowing their skills grow playing the games they love since 2004. We have players ranging from the age of 18 up to their mid-40s.

“The pandemic has been extremely tough on so many and none so more than our own group of vulnerable adults who were unable to meet with friends, socialise or have many positive outlets at all and the sense of relief and outpouring of joy that we witnessed on our first night back over the summer really emphasised to us the importance of sport and community.”

“The wonderful donation allowed us to purchase a jersey, scarf, hat and bag for every player,” Mick Kissane from the club said. “The buzz on the night these items were presented to each player was incredible. One Father said to us: ‘I can’t remember when I’ve seen him smile so much,’ before he headed home with his son decked out in green and white. I have been fortunate in my younger days to have had a successful playing career for Dublin, including two Minor All Irelands, a Junior All-Ireland and a Senior All-Ireland in 1963. Despite this success, I can safely say that having founded the Naomh Mearnog GAA group in 2004, I have gotten equal, if not more, joy from our days and nights with this group than anything I achieved as a player.

“Times are tough for so many and such generosity in these uncertain days will not be forgotten. So, on behalf of all those wonderful special players who were recipients of such kindness from the donation, their parents and our coaches we say thank you so very much. It is safe to say we as a GAA club (above) will continue to proudly wear our colours of black and amber going forward but there’ll be a fair spread of green and white on display every Tuesday and Saturday within our grounds going forward.”