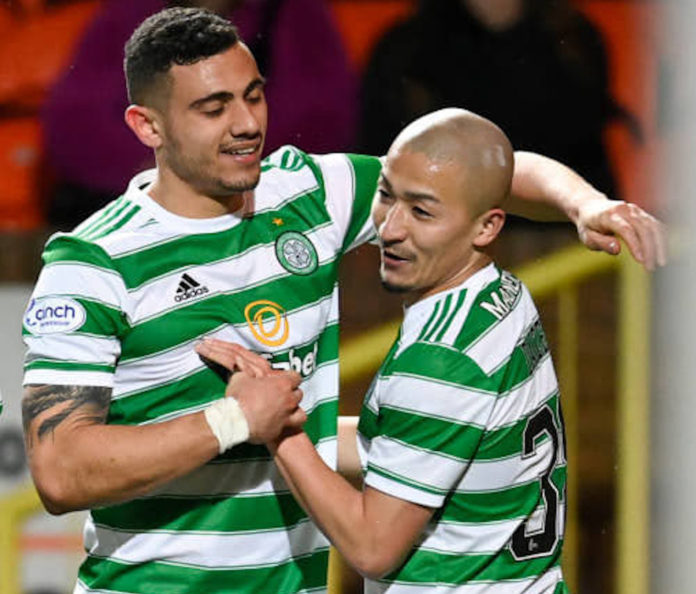 CELTIC’S season continued with the prospect of a treble in Ange Postecolgou’s debut season as they swept aside Dundee United in the quarter-final match at Tannadice.

The victory set up a mouth-watering tie against Rangers at Hampden, with the Glasgow Derby fixtures set to be played in a matter of weeks as the season draws to a close in dramatic fashion.

Few outside of Celtic Park would have given Postecoglou a hope at the outset of hostilities, but with a League Cup trophy already to show for his efforts and a lead at the top of the table, he can now also boast a Scottish Cup semi-final to show for his dramatic first season in Scotland.

Regardless of former glories in the months since his arrival in Scotland, the Celtic manager is focused on the next target.

“We’re still a team chipping away at our football, improving our players and their understanding of this football club and their resilience to overcome the challenges we’ve had so far,” he said. “What’s most important is that every day we are improving. We know there are massive challenges ahead and we’re in a good spot at this moment in time but the most important thing is where we go from here.

“Our League Cup win was great because it was a reward for a tough beginning but since then the team’s evolved anyway. You can’t just say you’ve won one and that’s it, that’s not how this club operates.

“We hope David Turnbull will be back in training after Monday’s game and we will see how he is from there. Johnny Kenny is back training and it’s great to see him playing again. With Mikey Johnston and Karamoko Dembélé, the reports I’ve had back are very good in terms of their attitude and how they went about the game, which is great.

“With all the young guys, they have their chance to put their names forward and be part of this season, but at the same time we’re happy to be patient and let them adjust to life and training.”

Finding form again
The young guys showed their worth to the team at Tannadice, with Dembélé playing a crucial role in Celtic’s third goal in a 3-0 victory, but it is the reinvigorated first team which is giving Celtic fans hope of a famous season.

A stuttering form guide may have created tension in some games as Celtic nevertheless secured their lead at the top of the league, but the visit to Livingston gave an opportunity to get a monkey off their collective backs and the Celtic players seized it, with an impressive performance on a notoriously difficult surface and against a side revelling in their label as bogey men.

That victory showed the value of stalwarts such as Callum McGregor and Tom Rogic, and ticked off an important fixture in Celtic’s now imminent run in for the league title.

Ahead now lie trips to Ibrox and Hampden against their challengers for both remaining trophies, and Celtic’s challenge is also a huge opportunity.

Win these crucial games and Celtic have a famous season to look back on, but lose them and there will be scrutiny over their mentality and will to win.

Battle for honours
What seems settled now is the presence of Postecoglou at Celtic next season. Regardless of the outcome he has marshalled Celtic into a position which few could have foreseen, but regardless of how impressive that is he is now in a battle for honours. At Celtic, you must win those battles.

How much easier will his future at the club be if he wins those honours? The stakes are high and he has shown his players have the capacity to do what is required of them.

It will have been heartening for Celtic supporters to hear their manager speak in recent weeks about the need to peak at the end of the season. Now, approaching that point, the fixtures list looks loaded. The crucial matches will all come shortly, and should his vision of a well-oiled team hitting their stride at the necessary moment come true then Celtic are well placed to take advantage.

Should they stall, however, the pressure of these last few weeks of the season will be instantly transferred to the summer, as supporters demand a team to win the title.

Postecoglou must be revelling in the pressure. Supporters who are planning their next visit to Hampden certainly are. What will decide this season are the men in green and white jerseys, though, and how and what they can do remains to be seen.

The form is good and the hopes are high, but there is no room for error. Ecstasy or agony awaits, but given Celtic’s history few would rule Postecoglou out as he seeks to take his place in the famous Celtic story.