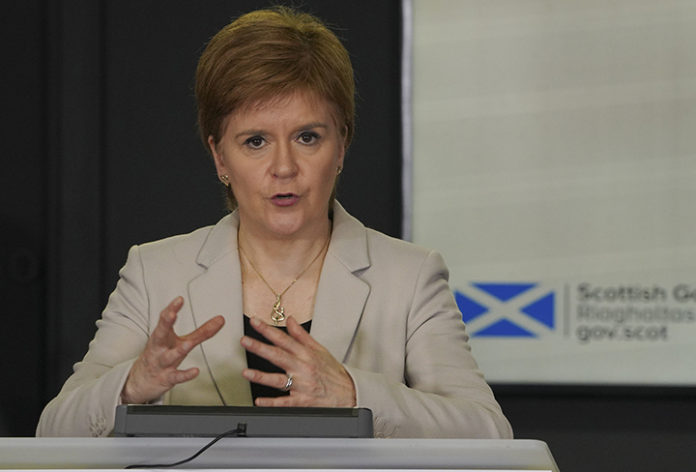 THE language used by those discussing hatred and intolerance in Scotland has witnessed a change following years of efforts by community representatives.

With attempts such as those by Call It Out; The Campaign Against Anti-Catholic Bigotry and Anti-Irish Racism to correctly identify the issues and remove them from the narrative of ‘sectarianism’ finally leading to altered terminology it is hoped that the future approaches by authorities can focus more closely on the problems in order to find a solution.

After decades-long anti-sectarianism funding, while the Irish community fought for anti-Irish racism to be isolated and identified rather than placed into the sectarianism narrative, the issue of intolerance directed at the Irish community in Scotland is finally being called out, along with a renewed focus on anti-Catholic bigotry

Language and tone
The attention to the language used comes in the aftermath of scenes of widespread anti-Irish racism and anti-Catholic bigotry in Glasgow’s city centre, as mass gathering by Rangers supporters led to intolerant behaviour and violence against police. Following the disorder, politicians such as Humza Yousaf and even First Minister Nicola Sturgeon (above) were outspoken in their condemnation of the hatred on display.

“Police still have a job to do, which restrains my comments to some extent—but to say I’m utterly disgusted by the Rangers fans who rampaged through the city would be an understatement,” the First Minister said. “I’m also angry on behalf of every law abiding citizen. In normal times, the violence and vandalism, and the vile anti-Catholic prejudice that was on display, would have been utterly unacceptable. But mid-pandemic, in a city with cases on the rise, it was also selfish beyond belief.”

Her words were echoed by Humza Yousaf MSP, with the former Justice Secretary—who now serves in Health—calling the gathering ‘the most disgraceful and shameful display of anti-Catholic bigotry and anti-Irish racism I’ve ever seen.’

The change in tone was signalled during election campaigning, with Call It Out hosting an online hustings for the Irish community, with representatives from the major parties giving assurances that they would begin to put what they had learned from they interaction into action. James Dornan MSP, in particular, was outspoken in his commitment to putting a new approach to the discussion into practice in his party’s new government.

“The use of ‘sectarianism’ is a lazy use of language and I accept that, but it’s one way you can get all groups around the table to discuss the issue,” told those attending online. “I’ve spoken to the Justice Secretary about this for a number of years and he says we should be calling it out for what it is—anti-Catholic bigotry, anti-Irish racism —so I’m on board with identifying language.

“I’ve been fighting on this front for many years —I want to achieve a Scotland where religion or ethnicity is your business and not a reason for someone else’s hatred.

Welcome words
The dramatic change was welcomed by Call It Out, who shared footage of Mr Yousaf discussing the issue and noted the size of the leap forward that had been taken in correctly identifying the problem and moving towards a position where effective solutions can be put in place.

“It’s hard to describe how important these words from Cabinet Secretary Humza Yousaf are,” the group said. “We have strongly campaigned for everyone to call out anti-Catholic bigotry and anti-Irish racism. Finally, there are signs that it is happening, and it’s a huge moment for our community.”

Among the other voices lending their weight to the renewed focus on the problem was Paul Sweeney, with the Labour MSP sharing some of the racist and bigoted abuse he receives, and explaining how regular such occurances are.

“As a Roman Catholic of Irish descent representing Glasgow as an MP and now MSP, I frequently encounter this sort of obnoxious and bigoted correspondence,” Mr Sweeney said. “Despite living in Glasgow my whole life, there has always been an undercurrent of anti-Catholic bigotry and anti-Irish racism.”

Another high profile figure to speak out was Carol Monaghan MP, who criticised the branding of such incidents and behaviour as ‘sectarianism’ as she discussed the abuse she had received for speaking out about the scenes in Glasgow.

“All too often, this behaviour is branded as simple ‘Glasgow sectarianism’,” she said. “This plays down the offence caused by such conduct, as well as its severity; if these chants were levelled at any other religious or ethnic minority, they would be rightfully and universally condemned as acts of hate and bigotry.

“We cannot dismiss anti-Catholic and anti-Irish sentiments as ‘the norm’ in Glasgow—they must be called out and prosecuted as the hate crimes that they are.”

With so many voices welcoming this new approach hopes are now being raised that the Irish community can now see those in authority make the long-overdue attention being given to this blight on Scottish society the first step in finally producing a strategy to protect and represent our community.