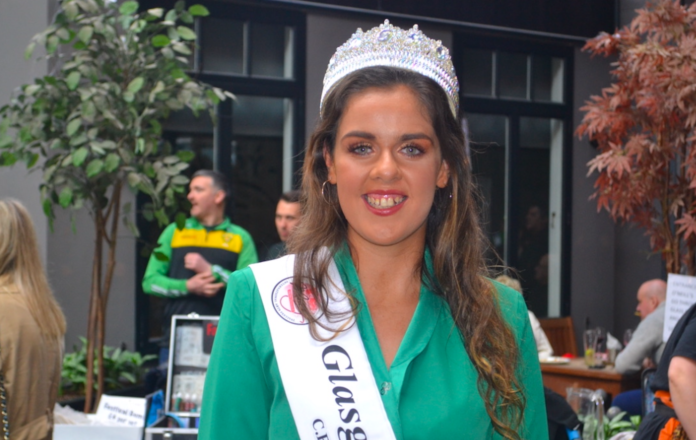 IN THIS, the 55th year of the Mary From Dungloe International Arts Festival, the Glasgow Mary From Dungloe selection committee were delighted to introduce this year’s Mary, who proudly stands tall—all 5ft 11ins of her—in the very worthy shoes of 23-year-old ‘Cailín Dubh,’ Miss Ciara Gallagher-Murphy from Cathcart in the city’s south side.
Ciara has taken over from the talented and beautiful Miss Ellenor Thomson, who held the title for the past two years, but unfortunately was unable to participate this year due to significant career opportunities, since graduating from University.

Ciara’s name is not the only dead giveaway of her Irish roots, which are steeped firmly in the footprints of her grandfather, Padraig Gallagher (Hannah Mhor) from Ranafast and her grandmother, Margaret from The Illies outside Buncrana. It’s fair to say that Donegal has been a regular destination since she was a mere eight-weeks-old.
Ciara’s mum, Theresa—who was reared in a home where both parents spoke Irish Gaelic—was taken to traditional music classes at St Roch’s Secondary School learning through the Irish Minstrels branch of Comhaltas, and Theresa has passed the traditional torch directly to her daughter, Ciara, and Ciara has happily ‘kept it lit’ and followed in her mum’s and Aunt Noreen’s footsteps by attending classes along with her brother Declan and cousins Siobhan, Michael and Anthony.

Ciara quickly progressed from tin whistle to banjo aged eight, competing in solos and ceili band competitions, whilst simultaneously developing a passion for Ceili dancing. She had a brief dalliance with Irish dancing, but music was and has remained her real passion followed closely by Gaelic football. Ciara won her first All-Ireland medal for Ceili dancing and her second was won when she played banjo with St Roch’s Irish Minstrels Grupai Cheoil when they won the senior competition in 2017, tutored by Frank McArdle. As well as playing music, she has played an integral role as the Scottish Regional Youth Officer for Comhaltas for four years.

As a child, Ciara’s grandparents spoke to her in Irish, so naturally she developed a love of the language. Her grandmother Margaret has been actively involved with Conradh na Gaeilge Glaschu for almost 50 years now and Ciara has been able to utilise her ‘cupla focal’ and helped out with tuition at the children’s Irish language summer camps.

Ciara started playing Gaelic football—under the watchful eye of coaches Joe McAleer and Brendan Friel—with Tír Conaill Harps aged seven, so she is quite the all-rounder you might say, and she also retains position of Student Officer on the TCH Committee and coaches the U14 and U16 girls teams. She continued playing football for Ulster University Magee, where she won the All Ireland Lagan Cup. This is also where she studied for her honours degree in Sport and Physical Activity. She will be returning to university this year to undertake a postgraduate qualification in sports physiotherapy.

It’s accurate to say that Ciara has not held back when it comes to immersing herself in Irish culture through all avenues—music, language, dance and sport. This lovely dark haired Cailin is a most worthy representative who is clearly invested in all things Irish and we would like to, along with the Mary of Dungloe Committee, The Irish Minstrels, Tír Conaill Harps—and indeed the Irish diaspora of Glasgow and all her friends, family and neighbours here and in Donegal—wish her all the very best of luck in this year’s Mary of Dungloe Competition.

We would also wish to extend our gratitude to the Fraioli Family who own the famous Brazen Head for their warm and welcoming Irish and Italian hospitality the night Ciara was crowned. A true testament to the diverse cultural heritage of our amazing city. Also to Mr Maurice Friel who has generously sponsored our Marys through the years.