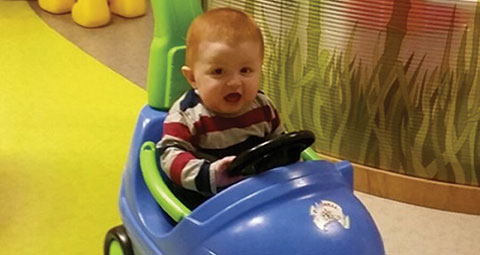 CHRIST the King Church Hall in Glasgow was the venue recently for a special event which raised more than £9000 for a Donegal toddler battling a rare and aggressive childhood cancer.
Two-year-old Caolan Melaugh (above), from Killygordon was just ten weeks old when he was diagnosed with stage-four neuroblastoma. Since then he has undergone high-dose chemotherapy, surgery, stem cell transplant, radiotherapy and immunotherapy.

Last year, things looked brighter for the youngster when the family received the news that his scans were clear. Unfortunately though, Caolan suffered a relapse while undergoing preventative treatment in the US and funds that had been raised to assist Caolan in his fight against the illness went towards the life-saving surgery and treatment he had to undergo there, which amounted to $170,000.

Caolan has now begun his sixth cycle of chemotherapy in Our Lady’s Children’s Hospital in Dublin. He needs to be cancer-free before he can start another trial drug that will be a stronger dose of treatment.

While the future remains uncertain for the family of four—Stacey, husband Gerard, Caolan and his little brother Eoghan, who was born in September—one thing is for sure, fresh funds will need to be raised for further treatment in the US that isn’t available in Ireland.

A number of fundraising events have already been held in Ireland, which help Caolan’s family to focus on looking after him and that support has been replicated in Scotland—which boasts a strong Donegal diaspora—with this latest fundraiser, organised by Caolan’s Scottish based Irish relatives, Harry and Monica Browne.

The dance held in the church hall saw auctions, raffles and donations raise the fantastic total of £9400.

“The event was a great success,” Monica said. “We are obviously looking to raise as much money as we can for Caolan’s treatment and to raise this amount in one evening was amazing. We’re very grateful to everyone who contributed.”

To follow Caolan’s progress or contribute towards his treatment visit: http://www.caolanmelaughfund.com