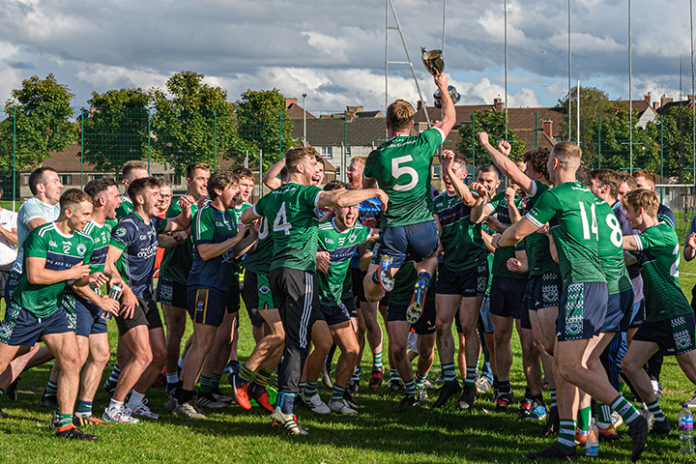 With Dunedin Connollys securing a clean sweep of titles in Scotland this year, including reclaiming their crown as Mens’ Senior Champions from Glasgow Gaels, Cathaoirleach of Scotland GAA, Peter Mossey, writes about the conclusion of the year’s football in Scotland and the many exciting events the GAA has to look forward to.

FOR me, the story of the 2021 Championship Finals is one of tremendous satisfaction as we have been able to resume and complete our GAA competitions after the fallow year in 2020 when our County Finals could not be played due to the Covid-19 pandemic.

However, the GAA as a sporting entity in Scotland has not only survived a devastating pandemic that has had tremendous consequences in terms of illness and loss of life, but in many ways has emerged stronger.

This is because our organisation is rooted in the local community and given that we are involved in a broad portfolio of activities off the field of play, we were able to turn our attention to these activities while we were unable to play our games.

This included a step change in the momentum for development of infrastructure at the Hub in Clydebank, which has enhanced the standard of facilities that we provide for our players at all levels, and the prospects of new facilities at Pearse Park in Cambuslang which is under development.

The remarkable and inspiring developments at our newest club, Ceann Creige promises to add an entire new dimension to the GAA in Scotland and their progress in assembling a squad of Hurlers and Camogs and a youth coaching set up during the pandemic is another amazing success story.

We have also been working much more closely with the Camanachd in making sure that we strengthen bonds with our sister sport of shinty and other sporting and cultural bodies, with implications both on and off the field of play.

We can also, as an organisation hold our heads high in the way that we adhered to the Covid-19 regulations, keeping our volunteer sportsmen and women safe and well. This, alongside good governance around safeguarding and coaching, adds layers of complexity to the playing of our games, but we embrace and welcome this and we are very willing to strictly adhere to these guidelines.

With regard to the Football Championship games on September 18 and 25, when we played our Junior, Senior and Intermediate finals respectively in that order, the quality of the football on display at these games was absolutely breathtaking at times, with excitement and tension in all of these games right up to the final whistle.

Another remarkable feature of these 2021 finals is that the Dunedin Connollys club in Edinburgh (above) qualified for, contested and won every Scottish final this year. This included a very special curtain-raiser to the Mens Intermediate Final, the Scotland Ladies (LGFA) Football Final between Dalriada (Aberdeen/Dundee) and Dunedin Connollys (Edinburgh), which was also very keenly contested and was also won by Dunedin Connolly Ladies.
These two weekends produced what will go down in our history as not only great games, but also a new experiment that has re-energised our clubs through the provision of unprecedented opportunities at three different levels (Senior, Intermediate and Junior).

The trend towards tiers has been found to be a positive experience in the GAA structures in Ireland and we are pleased to work on this model in our leagues and championships in Scotland. This means that we have produced a formula that incentivises everyone who wishes to play football in Scotland irrespective of their experience or ability, and helps the transition of players in other codes such as Aussie Rules to Gaelic football.

It is important to acknowledge and thank a range of people who volunteered to ensure that these finals were conducted in a highly professional manner, befitting the standards that we strive to set.

Jennifer Treacy, County Secretary, has continued to co-ordinate everything despite being on maternity leave and had her new baby on the day after the Senior and Junior Championship Finals day.

Our referees co-ordinator Ronan McCann is also our most senior official in Scotland GAA, and the standards he has brought to refereeing in Scotland through his own personal example and the standards he has set for others is exemplary. He was assisted throughout the season by a team of referees Niall Mulvenna, Paul Kerr, Fearghal McCrory, Finbarr McCarthy and Brian Sharkey. We also had volunteers to officiate as umpires and linesmen among whom were Tommy Campbell, Shaun McBride (Dalriada), Eddie Walsh, Deklin Rennicks and Shane Bradley (Sands MacSwineys), and Pat Cremin, Sean Campion (Glasgow Gaels).

The efforts of Joe Bradley to book and prepare the venue at St Ambrose High School in Coatbridge, along with Declan Murtagh (GG) is also appreciated and Emer Brennan, a graphic designer, assisted by Ciaran Coll (PRO), produced beautiful programmes for all of the finals and used the social media to disseminate information pre-match, scores updates and post-match data.

It is a great tradition in the GAA to play or sing the National Anthem before a Championship Final and through Joe Armstrong and Michael Dugeon from Comhaltas Ceoltóirí Éireann, we were able to deliver this for this year’s finals.
We therefore salute the special efforts of all those who play, administer and support Gaelic sports for their voluntary effort and dedication. Their cooperative spirit is the lifeblood that keeps the organisation in good shape and ensures that our games are played in the way they should be.

Thanks also to the generous sponsors of the GAA in Scotland, particularly Alan White Design and Malachy Ryan who has been so active on our behalf, O’Neills Sportswear and Creagh Concrete whose support inspires greater efforts.

In 2022, Scotland GAA will celebrate its 125th Anniversary of their first reported foothold in Scotland in 1897, and we therefore are living up to the standards set by our predecessors in continuing the community spirit of sharing and public service.