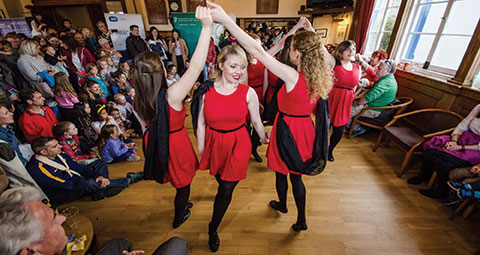 ORGANISERS, participants and attendees in Scotland’s first ever Irish Culture and Heritage Day have hailed the day as a resounding success and vowed to work hard to deliver similar celebrations of Irishness in the future.

With most of the prominent Irish gatherings focused around St Patrick’s Day festivals and events in the month of March, the opportunity to showcase the depth and vibrancy of Irish culture in Scotland at a different time of year was grabbed by the Irish cultural and community organisations, and led by the Irish Consulate in the capital the highly successful event was launched.

The Irish Culture and Heritage Day was held at the Grange Club in Edinburgh, with the traditional cricket fields converted to GAA pitches for the day and the clubhouse transformed into a centre for Irish culture, with the sounds of Irish music, dance (above) and language echoing throughout.
A variety of Irish groups and organisations from across Edinburgh and beyond were on hand to share their vision of how to build and develop Irish culture in Scotland in 2017 and to encourage ordinary members of the Irish community to get involved in whatever we they can with community and cultural associations.

The event was declared open by Ireland’s Consul General to Scotland, Mark Hanniffy, who, along with his Vice Consul Anne-Marie Flynn, had provided much of the drive to make the event possible, and looking back on the inaugural Irish Culture and Heritage Day, he praised those who took part and vowed to continue to efforts to celebrate Irish culture in Scotland.

“The event was also a wonderful opportunity for the Irish in Edinburgh to come together to meet and get to know one another better, and for the Irish community and those with an interest in Ireland to celebrate Irish culture in many different forms—from traditional music and dancing, to history and heritage, our Irish language, and of course, Gaelic games.

“The event couldn’t have happened without the support of all of the volunteers and community organisations who came together to make it such an excellent occasion, and I would like to thank Scotland GAA, Conradh na Gaeilge, Edinburgh’s Festival of Ireland, the Edinburgh St Patrick’s Day Charity Ball, Edinburgh Harps FC, and the Irish Business Network Scotland for their participation in this event, as well as the many Irish dance schools who performed on the day.

“I would also like to express my thanks to our commercial sponsors AIB GB, Fexco, ESB and Tourism Ireland for their generosity in supporting the event.”

Among those who supported the event was Scotland GAA, led by County Board Chairman Niall Considine, who reflected on a gathering which surpassed the expectations of all those involved in the planning of it.

“We were hoping to get maybe six or seven hundred people through the gate today, but talking to a few of the organisers they reckon there was well in excess of 1000 people here today, so it’s a massive success on our first attempt,” he said as the day drew to a close.

“It was important when we were looking to organise the day that it wasn’t just about sport or just about music or just about language, but about every part of Irish culture, and that it was celebration of that and a chance for people to get involved in all elements…and it seems like it went very well!”

Support also came from individual clubs, who made the effort to attend on the day in the busy period where the club season draws to a close and the university clubs frantically prepare for the coming competitive season.

Glasgow Gaels’ Jennifer Treacy noted the importance to clubs of another competition in the calendar, but also spoke out in praise of the way culture and sport were so seamlessly linked at the Grange Club

“It was a brilliant day,” she said. “We had university teams and club teams, and we all came out here for a start of season sevens tournament for the universities, so it was good for them to get their bearings and get their teams together, but it was really just a fun day for everyone to come out and enjoy a bit of Gaelic football and enjoy some different competition as well.

With the successful first event now complete, attention is already turning to next year when it is hoped the Irish Culture and Heritage Day will be held again—even becoming an annual event in the calendar of the Irish in Scotland—while Irish communities in other parts of the county, particularly Glasgow, have been inspired to look at launching their own similar events.