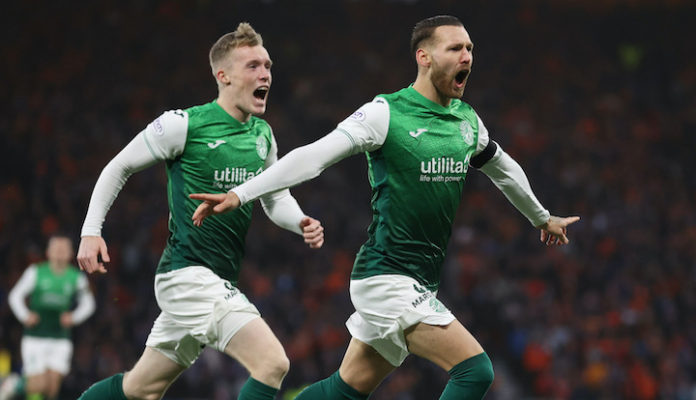 DECEMBER has been a miserable month thus far for Hibernian, with the team winning just one point from a possible nine. In the league, Hibs have been dreadful.

Closing out November, some 3000 fans watched the match up in Dingwall, which the Hibees lost due to a speculative Blair Spittal effort. Hibs huffed and puffed in this match with little cutting edge on display and but for a few County sitters missed late on might have had a hiding. Christian Doidge was sent off five minutes from the end for violent conduct in the match, while Martin Boyle saw red at the very end of proceedings, for giving lip to the referee.

The Hibees then travelled to McDiarmid Park. After 45 minutes the Saintees led 1-0, thanks to a Ryan Porteous own goal, but the home side also had Craig Bryson sent off on the stroke of half-time. With Doidge and Boyle both
suspended for this encounter much was expected of Kevin Nisbet and he did not disappoint. The Hibees laid siege to the home side’s goal for most of the second-half and it was Nisbet who bagged a deserved equaliser in the 83rd minute. The promising young striker’s performance—when the team really needed it—was just the tonic Hibernian sought. A sublime assist from Scott Allan allowed Jamie Murphy to score the match’s winning goal in the dying minutes, meaning that the Hibees earned the 2-1 win and all three points.

With Hibs down the years, the sublime has often been followed by the ridiculous. In 2021, the defeat in Dingwall was the ridiculous, yet it was preceded by one of the finest Hibernian victories at Hampden in the modern age.
Jack Ross’s Hibernian side annihilated Rangers at Hampden in the League Cup Semi-Final, booking an all-green final date with Celtic on December 19.

Boyle bagged Hibernian’s first Hampden Hat-trick since Joe Harper’s in 1974 and the Socceroo scored all three of his goals in the first-half, making himself a Hibernian legend in the process. The Gers had just parted company with boss Steven Gerrard yet it was still Gerrard’s team that was humbled by the Hibees. Scott Arfield did score a consolation goal for the light blues just before half-time, but it made no difference to the outcome of the match.
Throughout the match, Hibs looked good in attack, solid at the back and full of energy in midfield—in contrast to their league form. The team truly played for each other and for the fans and gave the green and white faithful their first truly great result against a big-team in three years. The tiresome 13-match winless run against Rangers has ended and the green jerseys now have a good chance of capturing the Scottish League Cup, which would be Hibernian’s fourth capture of the trophy.

Rangers quickly avenged their Hampden-hiding at the hands of the Hibees, winning 1-0 at Easter Road in the league on December 1. The match was looking like it would finish all square, but the customary Rangers penalty a few minutes before the end soon changed that. Nisbet was on target again, against Motherwell at Easter Road three days later, in a match that finished 1-1.

Four days after that came a humiliating 1-0 defeat to Livingston at Almondvale. A cowardly performance by the team enraged the fans, with two Hibs men being sent-off and Boyle missing a penalty. That miserable defeat amid the most miserable league run that a Hibernian side has participated in since the dark days of Jim Duffy in 1997/98 was the final straw and Ross was relieved of his duties soon afterwards.

Club legend David Gray took interim charge of the first team for the Hibees’ most recent match, a 1-1 draw away to St Mirren in which Josh Campbell scored for the Cabbage. It remains to be seen just who will be in the dugout for Hibs in the League Cup Final—whoever it is, they’re one match away from immortality.

Last month, we discussed the Hibees’ poor record in the bigger matches and the team actually ended up winning one such match! So, in that spirit, it’s worth pointing out that Celtic have won the last eight meetings with Hibs in major cup semis and finals—nine matches making up those eight meetings. With Celtic not quite as formidable as in recent seasons and with the Hibees capable of performances like that glorious one at Hampden against Rangers, there’s never been a better chance for Hibernian to shatter what is perhaps the last Hibernian Hoodoo. If Hibs can beat Celtic at Hampden the players will become legends and the green and white faithful will enjoy perhaps their Merriest Christmas, ever.