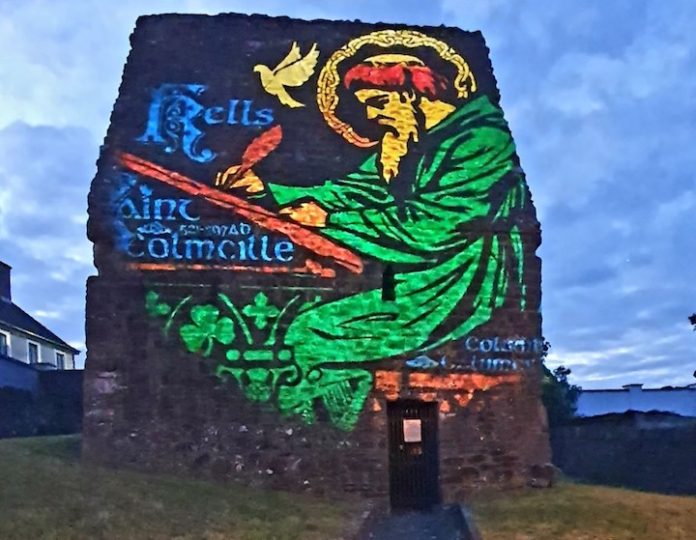 AS THE curtain comes down on a year of commemoration and celebration of shared culture, a special documentary examining the life of St Columba—or Colmcille—was broadcast simultaneously in Scotland and Ireland.

Colmcille1500 saw interfaith celebrations, cultural events and academic research take place as the impact of the life of St Columba was celebrated on both sides of the Irish Sea in one of the most significant cross-cultural endeavours between the two countries, most notably on the saint’s feast day in June and on his birthday on December 7.

The exploration of his life and the ties he represents—and which continue to bind Scotland and Ireland—saw involvement from a range of cultural bodies from the fields of music, art, language, sport and literature, as well historical assessments of his life and achievements.

Legacy and lessons learned
Speaking of the joint broadcast by BBC Alba and TG4 on the 1500th anniversary of the saint’s birth, Ireland’s Consul General to Scotland, Jane McCulloch reflected on Colmcille’s continuing legacy and lessons that can continue to be learned about him.

“Colmcille’s legacy, which is both secular and religious, provides a foundational bond in the Irish-Scottish relationship,” she told The Irish Voice. “We share his significant international legacy, which continues to flourish in diverse fields, including the artistic, linguistic, ecclesiastical and legal, as well as those people-people connections of our shared communities.

“On the 1500th anniversary of his birth, both TG4 and BBC Alba simultaneously broadcast Colmcille—An Naomh Dána trying to identify ‘who was Colmcille?’ through his various identities, whether warrior, saint, infringer of copyright or tackler of the Loch Ness Monster. We are all sure to learn more about Ireland’s third patron saint, and of ourselves in our hybrid Scottish-Irish lives through this compelling broadcast.

“TG4 also broadcast an earlier programme exploring and celebrating the artistic responses to Colmcille’s legacy, commissioned by the Royal Irish Academy and funded by the Department of Foreign Affairs, Athbheatha: Colm Cille Ildánach.”

Wider recognition
The recognition for the impact of Colmcille in both countries also came from the Vatican, as Pope Francis sent a message at the close of Colmcille1500 commending Colmcille’s ‘missionary zeal and pastoral fervour,’ which ‘continues to echo throughout the lands of Ireland, Scotland and beyond.’

The message came through a letter from the Vatican Secretary Of State to Bishop Donal McKeown of Derry.

“As the Catholic faithful, together with our brothers and sisters of other Christian communities, mark this solemn occasion, His Holiness prays that it will lead to a deeper appreciation of the shared spiritual patrimony bequeathed by St Columba and inspire anew in our own day a commitment to holiness of life, the spread of the Gospel and the renewal of the fabric of society through Christ’s message of healing, reconciliation and hope,” the letter said. “With these sentiments, the Holy Father commends all taking part in the anniversary celebrations to the protection and prayers of St Columba, and cordially imparts His Apostolic Blessing as a pledge of joy and peace in the Lord.”

Though the celebrations throughout the year were, in large part, community-led events and exchanges, several high profile projects took place throughout 2021 which showed the importance such cultural efforts have for governments and local authorities in Scotland and Ireland and it was fitting that the year ended with such an ambitious collaboration between the Irish- and Gaelic-language channels.

Exploring and sharing history
Reflecting on the links between Scotland and Ireland, forged by Colmcille and continuing to this day, Alan Esslemont Director General of TG4 spoke about the need to explore such history, sharing it with the people of both countries.

“Addressing the Scottish Parliament in 2016, President Michael D. Higgins reflected on the relationship between Ireland and Scotland, ‘given our shared and complex history, it has often been difficult to say where the Irish ends and where what is Scottish begins. Or the other way round.’” he said. “Colmcille, warrior-cleric-politician, was in the vanguard of what was consciously the Irish colonisation and plantation of Scotland, spreading Irish Christianity throughout Scotland and using the names for Ireland, Éire, Fódhla, Banbha, Ealg to symbolically stake out Irish ownership of key places in Scotland; Strathearn (the Valley of Ireland), Glenelg (the Glen of Ireland) Atholl (New Ireland), Banff (Ireland) and Elgin (Little Ireland).

“I am delighted that to mark the 1500th anniversary of his birth, that TG4 and our Scottish sister channel, BBC Alba, are bringing a fresh and compelling documentary to screens in both of our countries on the life of this most obstinate, avant-gardist, bold and influential Gael who permanently changed both Ireland and Scotland.”

With the efforts of the last year in sharing culture, language and history coming to a close, it will be hoped by communities on both sides of the Irish Sea that the fruits of 2021 will continue to bear long into the future.