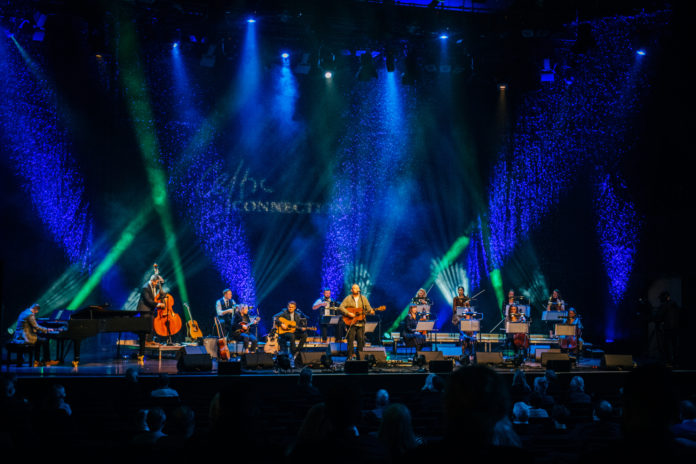 THE curtain came down on Celtic Connections (above) for another year after almost three weeks of world-class
concerts, exhibitions and screenings.

The 29th edition of the UK’s premiere celebration of roots music pivoted to a hybrid approach in light of the Omicron variant in January, preserving the 18-day festival and successfully staging around 60 spectacular in-person concerts, a number of intimate filming sessions and an exciting digital offering.

More than 500 artists were involved across the festival in shows that brought in more than 23,000 attendees to 18 venues right across Glasgow—from the famous Glasgow Royal Concert Hall and The Old Fruitmarket to the Mackintosh Church in the west end and Tramway in the south side of the city.

The online programme was enjoyed by thousands of viewers from 31 countries around the world, including Japan, South Africa and the Holy Land, with more than 700 minutes of exclusive programming to be enjoyed.

The Showcase Scotland international partner for Celtic Connections 2022 was Scotland’s Celtic cousins, Wales, with leading musicians taking to the stage for a series of brilliant performances across the closing weekend. Showcase Scotland took place online for a second year, so Wales will return in 2023 for a full in-person partnership, alongside Brittany. Musicians from both countries will feature when Showcase Scotland at Celtic Connections returns for its 23rd year. The festival will present both leading and emerging Welsh and Breton artists during what is set to be an exciting and dynamic showcase.

The innumerable highlights this year included a show stopping torch-lit Shetland viking march through the streets of Glasgow, a spell-binding performance from Anoushka Shankar accompanied by the Scottish Chamber Orchestra, several foot-stomping sell-out trad gigs and a unique strand of shows celebrating Scotland’s Year of Stories.

“Having been faced with such uncertainty at the turn of the year, we feel very fortunate to have preserved an 18-day festival and to have met disruption with innovation and creative solutions at every turn,” Donald Shaw, Creative Producer for Celtic Connections, said. “It’s been a joy to provide a global platform for musicians and performers and to share our love and passion for performance with the world, while keeping those involved safe.

“We have showcased uplifting performances from some of folk’s brightest talent and brought that hugely sought after live-gig experience to thousands of festival attendees —all with a renewed sense of optimism and vigour. Thank you to everyone who stuck with us to make this year’s festival possible. We look forward to returning bigger and better again for our 30th year in 2023.”

Councillor David McDonald, Chair of Glasgow Life and Depute Leader of Glasgow City Council, added: “Celtic Connections took on even greater significance this year for the thousands who were able to enjoy concerts and performances live or at home. The ability of the musicians, performers, festival and venue staff to produce such a wonderful series of events amid changing circumstances shows their determination to deliver this extraordinary showcase of Celtic music.

“Celtic Connections has brought light to Glasgow again in the darkest winter days and given us all renewed hope for an uninterrupted year of concerts, festivals and performances.”

“It’s heartening to see audiences returning in such large numbers to the live events staged as part of Celtic Connections’s hybrid offering this year,” Culture Minister Neil Gray said. “As we begin our recovery from the pandemic, it’s important to support the rich array of festivals and events across the country. There is something for everyone.”

Alan Morrison, Head of Music at Creative Scotland concluded: “The return of live performances at this year’s Celtic Connections allowed us to hear new music and catch up with old friends as the concert hall doors reopened. On top of this, a beautifully curated digital programme reached out to music fans at home in Scotland and across the world. While we share the disappointment of all the artists and audiences who had their gigs cancelled, the back-from-the-brink nature of Celtic Connections in 2022 has made us value the music we can share together all the more. Congratulations and a heartfelt thanks to everyone involved who helped brighten our winter nights.”

The festival will stage a number of rescheduled concerts later in the year including Isle of Skye electronic Celtic fusion band Niteworks on June 22 and Scottish folk favourites Capercaillie on June 23, both of which will be joined on stage by the BBC Scottish Symphony Orchestra.

Details of other rescheduled performances are due to be announced including two captivating shows from Whisper the Song—the festival’s strand celebrating Scotland’s Year of Stories. Breathe, featuring Strathspey composer and multi-instrumentalist Hamish Napier and Scottish storyteller David Francis will highlight global climate change concerns through a collection of stories from Scotland’s natural world and Scotland-based Jamaican singer-songwriter iBrina will be joined by special guests for her Homage to Home.

Celtic Connections will return for its 30th anniversary edition from January 19 to February 5, 2023.