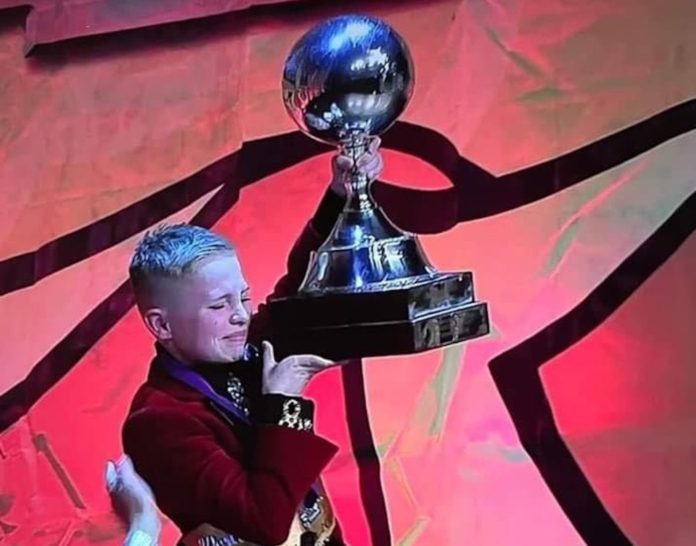 AFTER a gap of three years, the World Irish Dancing Championships made a triumphant return in Belfast, and it featured a number of outstanding successes for dancers from Scottish schools.

The competition—organised by An Coimisiún le Rincí Gaelacha (the Commission of Irish Dancing), the biggest and oldest governing body of Irish dancing worldwide—was held in the city’s Waterfront Hall and saw more than 3500 competitors taking part in the week-long event, which had been cancelled in 2020 and 2021 due to the Covid-19 pandemic.

This year marked the 50th year of the competition and the commission delved into its archives to produce a historical display of photographs and memorabilia chronicling five decades of competition. The championships have grown from humble beginnings—with the very first one having been held in the Mansion House in Dublin in 1970—into a truly global competition which is akin to the Olympics of Irish dance.

And in this landmark year, there were some phenomenal performances from some of the dancers from Scotland. From the Sharon Taylor Academy, young Oscar Donnelly (above) took to the top prize in the Boys 10-11 competition, Declan McLaughlin finished second in the Over 21 Men’s event, while Laura Davidson placed fourth in the Over 23 Ladies contest. There was a fantastic second place finish from Ethan Farrell—from the Harrison School of Irish Dance—in the Boys 12-13 competition and there were fourth place finishes for the ceili dancers from the McLaughlin School of Irish Dancing in the Junior Girls 9-Hand Ceili (13-16) and the Senior Ladies 8-Hand Céilí (Over 19). Meanwhile, Emma O’Connor finished in the top 10 of the Girls 16-17 event, for the Caroline Greene School of Irish Dance.

Sharon’s stars
Sharon’s dancers spoke to The Irish Voice about their successes at the World Championships but also the work they had to put in in the past two years given that they had been denied the chance to compete in 2020 and 2021.
“It feels amazing,” Oscar said. “I still can’t believe it. I was just happy just to be able to dance on that stage at my first worlds, so winning the globe and becoming the world champion doesn’t feel real yet!

“It feels amazing,” Declan added. “Having waited three years just to compete again at the World Championships it’s great to know that all the hard work has paid off. The past two years of training were like nothing we had ever had before, going from class in the studio to class on Zoom, so coming from that and achieving my highest world placement and being so close to winning is just unreal.”

Laura said: “We did so much work leading up to the World Championships to prepare ourselves, both inside and outside of the dance studio. This year was very important to us after the last two years were cancelled due to the pandemic. I couldn’t believe it when I was called out for fourth place, I was absolutely delighted that all the hard work had paid off. It was my first time bringing back a globe to Scotland, and it was a day I will never forget.”

Ethan’s stunning debut
For her part, dance teacher Susan Harrison was beaming with pride at the second-placed success of her student, Ethan, and spoke at length of the hard work that he, and many of the other Scottish dancers, had put in and also was grateful for the support that the school had received.

“I’m still speechless,” she said. “I could never have dreamed that eight years into my school being open, I would have a pupil going to the World Championships, never mind being second in the world.

“With it being Ethan’s first worlds, we had no baseline to compare to, so we really didn’t know what to expect. Both he and his sidekick Rachel—who also qualified to dance in Belfast—could not have trained any harder, they were both as prepared as they could be, they trained like Olympic athletes and yes there were tears and snotters, but they both knew what they wanted to do and the work they had to put in.

“On the day of the worlds, Ethan held his nerve and two out of his three performances made me cry! I had people asking: ‘Is he yours?’ and the pride of saying yes and knowing the hard work he had put in had paid off made me beam with pride.”

“It was a long wait until the results and we all went back for a wee snooze before they were announced,” she added. “We were already buzzing after his fellow Scot, Oscar Donnelly, won the 10-11 competition and our friend from Newcastle, Kian Tallon, placing sixth in the 11-12 contest.

“Then he was up. As they called the number from 30th place in reverse order, I honestly hoped not to hear his number closer to the end, but this was already the top half of the competition being in the recall, so anything else was a bonus. It got to top 20 and I thought right ok this is going well, Ethan sat nervously beside me with his head in his hands. It got to 14th, 13th, 12th—and 11th was a world medal—so I couldn’t believe one of my pupils had achieved a world medal in their first year at worlds!

“Then they announced the top 10 and he was still in. For some reason when it got to seventh, I thought right this could be him, but no it still wasn’t. The numbers continued to be called fifth, fourth, top three! I honestly couldn’t believe it, then they still hadn’t said his name. Top two! He gripped onto me so tight. Then his number was called, Ethan Farrel 118 second in the world! I cried and he grabbed me. All the tears and snotters were worth it!
“The support from everyone in Scotland has been amazing and I hope to have many more of the moments in my teaching career. I cannot believe the Harrison School and my wee superstar Ethan Farrel are bring a globe home to Scotland!”

Top 10 finish
Of Emma O’Connor’s success, her teacher, Caroline Greene said: “Our fabulous Emma danced at her first solo World Irish Dancing Championships at Easter. She got an amazing 10th place out of 187 competitors.
“Emma’s work ethic over the last year has been incredible and Michelle and I are delighted that her talent and dedication shown through to receive 10th place. We are so proud of our hard working, talented dancer.”
Next year’s World Irish Dancing Championships will take place in Montreal, Canada.