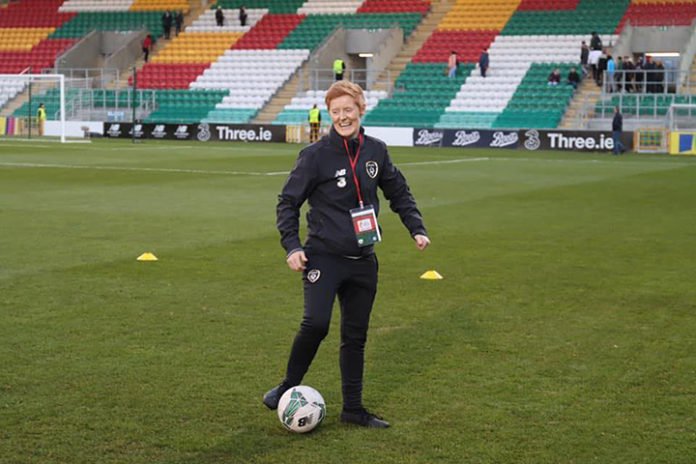 The Scottish champions confirmed that the outgoing assistant manager of Ireland Women’s A Squad (above) has signed a two-year agreement with the club and will commence in her new post on November 8, taking over from Interim Head Coach Grant Scott.

“I am honoured to be taking the role of Glasgow City Head Coach,” Eileen Gleeson said of the appointment. “For many years I have admired the progressive, ambitious, and inclusive values promoted by Glasgow City and their ongoing commitment to providing opportunities and pathways for girls and women to participate at all levels of the game. Glasgow City are a trail blazing club who continue to push boundaries, and drive standards in Scottish Women’s Football and beyond as demonstrated by their unrivalled success both on and off the pitch.

“I am delighted to be part of such a club where winning ways are driven by a culture of high standards and a refusal to stand still. I want to add to Glasgow City’s success and will be very ambitious about this. While winning will always be important it is more important that we reflect the club’s values both on and off the pitch. I am very excited to get started in the role and to continue to build on the excellent work of all involved to date.”

Gleeson, a UEFA Pro Licence holder, stepped down from her international role after Ireland’s 2023 FIFA Women’s World Cup Qualifying double-header against Sweden and Finland in late October. Prior to the positive impact that she has had on an ever-improving Ireland national team, she proved a tremendous success domestically, managing Peamount United to six trophies, including leading the team to the treble in 2010, before winning the inaugural Women’s National League the following season. She has also made her mark in Europe, becoming the first coach to manage an Irish side to the knockout stages of the UEFA Women’s Champions League, when she guided Peamount United to the last 32 of the UWCL in season 2011/12, eventually being defeated by French giants, Paris Saint Germain. Gleeson has also managed at UCD Waves, earning runners-up spots in both the 2014/15 league and 2014 FAI Women’s Cup. She left to focus on her PHD studies in 2017.

Commenting on Eileen’s appointment, Glasgow City Chief Executive Laura Montgomery said: “I am delighted to be able to announce Eileen as our new head coach. I made no secret some months ago, that this was not a position we would be advertising. We have had a clear plan for some time regarding succession at our Football Club and were
prepared to play the long game to ensure we got the candidate we were after.

“I first met Eileen over five years ago and have known since then that I would want her to be Head Coach of our Football Club one day. Her football knowledge, player management skills and attention to detail is in my opinion
unrivalled, and you only have to look at the PhD she is about to complete, based on decision-making in elite football, to know that she is not only an intelligent woman, but one who’s own thirst for knowledge and to improve is impressive.”