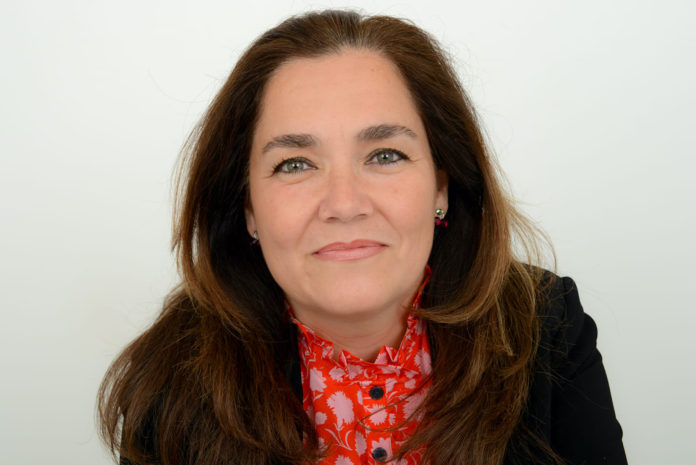 CAUSEWAY: Ireland Scotland Business Exchange announced an expansion of their team as Taoiseach Micheál Martin spoke to the British-Irish Association about the the need to continue to work at the relationship between our two islands at a time of uncertainty and global challenge.

Maria Tendero (above) was appointed as the network’s new Marketing, Communication and Events Manager, and will focus on drawing attention to the work of Causeway and the opportunities for potential members.

“Maria will be focused on building the Causeway network on both sides of the Irish Sea by creating and driving tailored events and promotional opportunities for our members,” Causeway explained upon the announcement of her new role. “First up is our Causeway Awards Dinner alongside a number of other events in the diary.

“Originally from Madrid, Maria started her journey to Scotland via the south of Spain in 2005, where she headed the marketing department for an Irish PLC in Marbella. Setting up her own consultancy business, she helped many Scottish organisations with their internationalisation strategies, trading, and business development plans, as well as promoting Scotland as a business destination.

“After graduating with an MBA from the University of Glasgow, Maria held several management positions that have taken her around the world. Her roles have been pivotal in securing solid and agile business partnerships across key markets in Europe, Latin America, and United States.

The need to continue to strengthen the links between Scotland and Ireland was underlined by the Taoiseach as he spoke in Oxford at the latest Conference of the British-Irish Association.

The Taoiseach was calling on those present to ensure that the relationship underpinning the
interlinked economies of Ireland and the UK is valued and worked at, to protect it at a time of increasing challenge.

“Brexit has fundamentally changed that relationship—we recognise that,” Mr Martin said. “But the UK remains an important partner for the EU. It is critical therefore that we find a way through this undeniably difficult phase to build better relationships between the EU and the UK with our vast trade and intertwined economies, our shared global interests and our commitment to democratic values and norms. But also knitting back together the relationship of partnership between the British and Irish Governments which is so vital for peace and prosperity on these islands.

“Let us never forget the breadth and depth of the British-Irish relationship across so many sectors—trade, finance, economy, energy, agriculture and food. Our culture and arts continue to flourish based on personal friendships and family relationships across this land. However, like all long-term relationships, there are times when we don’t understand each other as well, perhaps misunderstand each other’s actions and the resulting consequences, but ultimately we both want and need to make it work.

“Regrettably, unilateral action on the Protocol and on legacy is at odds with the spirit of partnership that is needed to underpin the Good Friday Agreement. It is testing and fraying that partnership between us. It risks further instability in Northern Ireland and damage to key sectors of the economy. That is why with the background of a terrible war in Europe and shifting political dynamics, the focus of my thoughts this morning is on the sustained political partnerships we need in support of the Good Friday Agreement with the British Government and with the Northern Ireland Executive.”

Looking ahead to the selection of Liz Truss as Prime Minister, the Taoiseach pledged to work openly with her, offering support in her discussions with the European Union.

“I speak at a time of political change here, as we await the announcement of a new leader of the Conservative party and the new Prime Minister of the UK,” he said. “I wish them well in the challenging times ahead. I want to work in an open and constructive way with the new British Prime Minister. I sincerely believe that the EU would respond positively to a serious and genuine signal from the new British Prime Minister that their priority is to reach an agreed outcome on the issues around implementation of the Protocol.

“Brexit marked a fundamental change in the EU-UK relationship, and the type of Brexit chosen by the British Government has meant that the trading relationships on these islands have been fundamentally altered.”

However, despite that openness, he also spoke critically of the British Government’s actions over the Protocol and called for ‘engaged and constructive leadership’ for the benefit of people in all nations of these islands.

“I am deeply concerned about the British Government’s legislation which would unilaterally undo core elements of the Northern Ireland Protocol,” the Taoiseach said. “Concerned by what it means for the partnership approach we want to see between the EU and the UK; concerned by the wider message it sends about a rules-based
international order; and, most of all, concerned because it is neither in the interests of the people of Northern Ireland nor what they want.

“The EU recognises that there have been genuine difficulties with aspects of the implementation of the Protocol. But we need to address these together. The EU has listened very carefully to the concerns of people in Northern Ireland. It has already put forward practical proposals and I want to take a moment to thank Vice President Sefcovic for his very strong, engaged and constructive leadership of these efforts, and for his remarks last night.

“I believe there is a path to an agreed way forward on outstanding issues regarding the Protocol if we keep our focus on addressing the real problems that affect people in Northern Ireland and on identifying pragmatic and operational solutions. Only an agreed outcome between the EU and the UK will provide a durable solution and much needed legal and economic certainty for business and the people of Northern Ireland. The benefits of doing so are clear. The risks of not doing so are significant. And, at a time of great challenge and upheaval in the world—with war in Ukraine, with our citizens grappling with energy prices and cost-of-living increases—we have an obligation as leaders to demonstrate that democratic, serious politics work.”