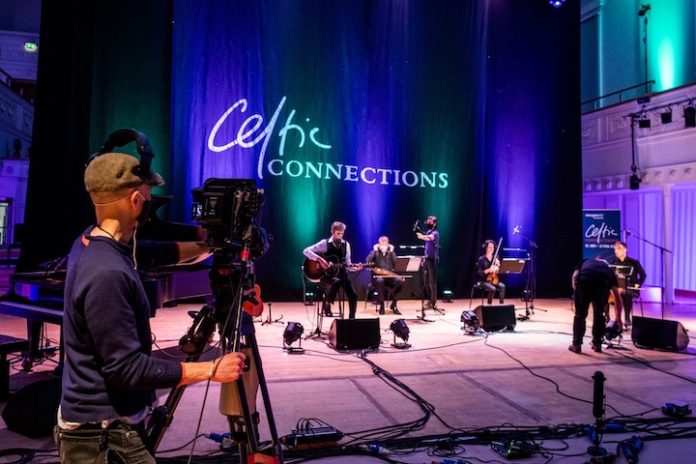 THE internationally-renowned Celtic Connections festival scheduled to take place from January 20 until February 6 has had to make last-minute tough decisions regarding events due to the Covid-19 pandemic restrictions with further decisions set to be made in the coming weeks.

Of the more than 200 events scheduled as part of the 18-day festival, some have already been cancelled with a stay of execution put over many more with further decisions postponed until Scottish Government guidance on current Covid-19 restrictions is clearer.

At 5am on the December 27, tougher restrictions came into force across Scotland in an attempt to stop the spread of the Omicron variant of Covid-19 in the country. As well as limiting the number of people who could gather in both indoor and outdoor settings, the requirement to have a physical distance of at least one metre between individuals was re-established in the country—a move which has had a crippling effect once more on the live music industry that had only seen a brief recovery in the past few months.

Although these new restrictions were scheduled to operate until January 17, many foresee that they will not be lifted at least in full and that has led to the latest move by Celtic Connections staff to amend the festival’s programme.

Of the events that have been pulled so far, many were scheduled to take place in the opening week of the festival—due to start only four days after the review of current restrictions. With so much planning involved in events, there is literally no time to make adjustments at such short notice, so a revised plan has been put in place for these events and these plans are currently being communicated to artists and festival goers.

If the restrictions are lifted on January 17, then there will be no barriers to operating a full capacity festival and for the rest of the scheduled events, this will be as big a shot in the arm as the successful vaccination programme that has helped get the country to the current position we are in.

Some shows—many of which involved overseas artists—have been cancelled for this years’ festival. The details of these are yet to be finalised, however the priority is in communicating with artists and ticket holders for the time being.

For the events pencilled in for the middle and later dates of the festival, the organising committee are holding their breath awaiting further guidance from the Scottish Government. The hope being that restrictions can be lifted and the events can proceed as planned, the fear being that restrictions will remain in place and events will either be rescheduled for a later date in the year or else sadly cancelled fully.

In 2021 the festival was able to operate online via a hugely successful subscription service which sold over 30,000 tickets for the festival. This was, in part, possible due to the clear nature of the long term guidelines at that stage, and many of the events were recorded for broadcast as early as October 2020 which allowed plenty of time for the production to take shape.

For this year’s festival and with the new restrictions currently in place only emerging less than a month before the festival was due to start with no clear idea of an end date, putting together an online production on that scale is just not possible.

The festival released a statement on January 6 which said the following: “It is with a heavy heart that we confirm a number of shows and elements within the Celtic Connections programme are no longer able to go ahead.

“Artists and ticketholders for the shows affected so far are being contacted directly and we would like to thank everyone for their ongoing support and patience. We are currently working through many different scenarios and options and reviewing all shows in line with existing event restrictions. We will continue to keep our audiences up to date as the plans for Celtic Connections 2022 evolve.”

Whilst the exact nature of what the festival will look like is currently unclear, what is known however, is that the team behind one of the world’s largest and most successful traditional music festivals will do everything in their power—and within restrictions—to bring the festival to audiences this year.

For up to date information, please visit www.celticconnections.com