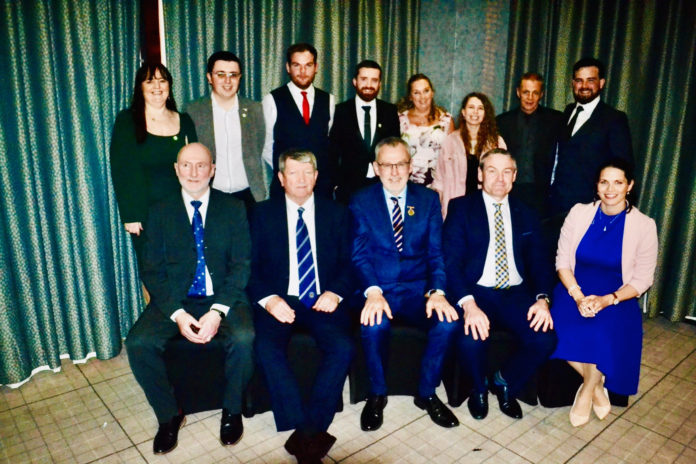 ON MARCH 26, 2022, the Gaelic Athletic Association in Scotland celebrated 125 years of activity with the first record of GAA activity being in 1897 with the formation of Red Hugh O’Neill GAC in the East End of Glasgow.

It would be impossible to do justice to the last 125 years of GAA history, the equivalent of five generations of GAA activity and five generations of remarkable stories of how the Irish integrated into and contributed to everyday life in Scotland and in addition to their expertise, they brought their unique brand of culture, lifestyle, pass-times and of course sport.

Much of the more recent history was represented in the room on the evening with previous County Board chairs and secretaries and other Executive Board Officers. Their contribution—and the contributions of those who are no longer with us—were acknowledged in the commemorative programme, produced for the event, as custodians of the GAA in Scotland who have kept our GAA culture alive in Scotland, and brought their brand of Irish friendship and camaraderie to towns and cities as the GAA has so remarkably done throughout the world.

GAA representatives from the other counties in Britain were there to support Scotland in celebrating this landmark occasion, led by the British Provincial Council Chairperson Noel O’Sullivan, while Ulster Council were represented by their Chairperson Ciaran McLaughlin and the GAA President Larry McCarthy also graced the occasion and complemented the GAA in Scotland ‘and everyone in those 78 GAA Clubs who offered opportunities for people to celebrate their culture and enjoy our games and be part of the intrinsic value of what a GAA Club abroad represents.’

One aspect of the more recent history that was mentioned was Pearse Park, an asset that was purchased in 1953 by the GAA, is legally vested in the GAA and Title Deed bears the name of Croke Park as a Trustee and this was a massive factor in its contribution to the GAA revival in Scotland in 1984. This revival was led by Eoinie Kelly—Life President of the GAA in Scotland in the 1990s until his death in 2005—who came to Scotland in 1947 and was
instrumental in a wide range of Irish cultural and sporting activities in Glasgow for over 50 years. Eoinie would have been pleased that his daughters Marion, Caroline and Patricia were at the event and Patricia with her husband Harry Mullin had brought the Sam Maguire Trophy from Tyrone to the event.

Also present were two representatives from the Camanachd—Archie Robertson and Burton Morrison. Jenny Quinn was with us representing the Irish Consulate, Orlagh Riely and Rosemarie Cassidy both from Coatbridge’s St Patrick’s Comhaltas Ceoltóirí Éireann and Rosemarie sent a message of thanks to the organisers in the following message: “Great night in Glasgow, celebrating 125 years of Scotland GAA. Hearing the Southside fiddlers as we approached the hall to the brilliant video of the past 125 years and the Irish Dancing display by Stephanie Duff Academy of Irish Dancing from Coatbridge. It was so fitting to see a photo of Mayo’s Fr Eamon Sweeney who was instrumental in establishing both GAA and Comhaltas branches as well as our St Patrick’s Festival, in the Brig. GAA and Comhaltas depend on volunteers and keeping tradition alive. This was evident last night with so many people all sharing stories, and my own personal story is that I got to hold the Sam Maguire Trophy! I’m forever hopeful that I’ll see a Mayo-winning captain lifting Sam at Croke Park.”

One person who was unable to be with us was Tom Daly—a Donegal man, former President of Ulster Council and long time supporter of the GAA in Scotland. It was Tom who, in 2011, developed a masterplan or vision for a twin-track approach for infrastructures development involving the Clydebank Hub and Pearse Park at diagonally opposite ends of the City of Glasgow. This included the Clydebank multi- sport Hub which went ahead under the brilliant direction of Ronan McDermott and subsequently Jennifer Tracey. Tom was disappointed not to be able to attend our 125 celebrations. However, the message he sent summarised what this occasion means to many of us.

“I very much regret having to miss your 125th celebration which should be a great occasion for those who carried the flag for the GAA in Scotland down through the years and into the present,” he said. “I wish you all well in the future and earnestly hope that the vision of a vibrant GAA presence on opposite sides of the city can be achieved. It would be great to see the amazing community hub at Clydebank complimented by the redevelopment of our Association’s own grounds at Pearse Park. The greatest tribute that can be paid to those who acquired the site many years ago and who preserved it for GAA use is to get it up and running again as a vibrant centre for our games and culture. Go neirigh an tadh libh!”