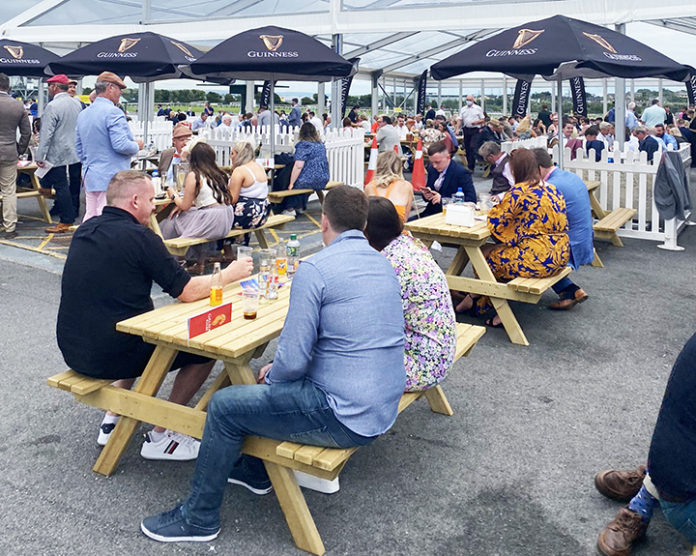 SO THE Galway Festival went ahead this year, but with 1000 spectators (above), not the 5000 that we thought would be allowed in. The latter would have been fantastic, but it was great to have some spectators there at least, especially as there were none last year and the atmosphere was dreary as a result. The punters, this year, were welcomed with open arms and brought some of the colour and excitement that we’re used to at the Connacht venue. Indeed, it was the first time that paying customers passed through the gates of the venue since October 2019 and those lucky enough to get a ticket grasped at the chance to return.

On the Wednesday, when the jumpers started, Nodoubtaboutthat won the first race—The Irish Stallions Farms EBF Mares Handicap Hurdle—ridden by Champion Jockey, Tom Joseph Kelly, and trained by Shane Crawley. She beat the Willie Mullins horse Dysart Diamond by two and three quarter lengths. Annie G—ridden by Darragh O’Keefe—won the second race of the day for trainer Henry De Bromhead. Mullins won the Tote Galway Plate Handicap Chase with Royal Rendezvous, ridden by Paul Townsend, who had to take it right to the line as another of Mullins’ horses, Easy Game, got within a length of Royal Rendezvous, who just held on to take home the €147,5000 prize. Memorable Daise, trained by Mullins and ridden by Jody Townend, won the Irish Stallions Farms EBF Mares INH Flat Race at a nice price of 11/2. Fan De Blues—ridden by Paul Townend—and Saldier were another two winners for Mullins, with the latter an 18/1 winner ridden by Patrick W Mullins. The Guinness Novice Hurdle was won by M C Muldoon, again ridden by Patrick W Mullins and trained by Willie Mullins. The decorated trainer was also successful in the Guinness Handicap Hurdle with Jazzaway—ridden by Conor McNamara—getting the win. Jazzaway was Mullins’ eighth winner of the meeting in less than three days.

Hopefully the crowds will be back to the racecourses soon, what with 40,000 being granted permission to attend the All-Ireland Hurling and Football Finals at Croke Park on August 22 and 29 respectively. The semi-finals of both competitions will see 24,000 each in attendance at the same venue. With the Listowel Harvest Festival and Longines Irish Champions weekend on the horizon, it would be great if larger crowds were allowed to attend these meetings—and others—before the summer is out.