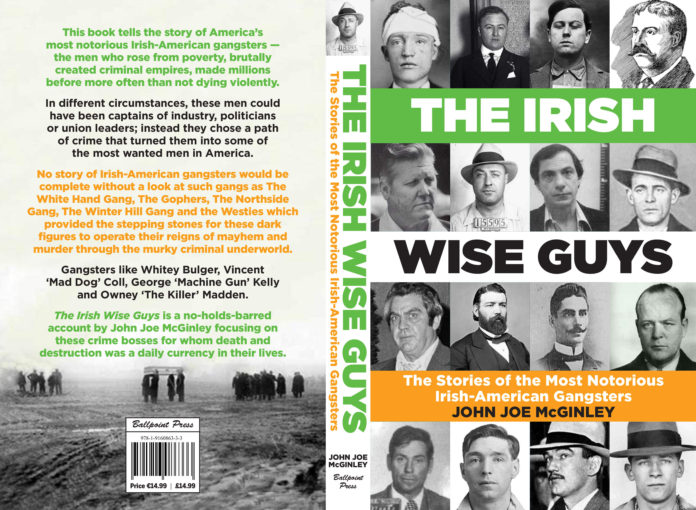 A NEW book by regular contributor to The Irish Voice, John Joe McGinley, aims to shine a light on some of the more murky characters who have existed among the Irish in America.

The Irish Wise Guys, written by the Donegal author, explores the tales of the most famous and influential Irish-American gangsters and their gangs who ruled the streets of New York, Boston and Chicago.

It is a no-holds-barred account focusing on the most notorious of men, crime bosses for whom death and destruction was a daily currency in their lives. Gangsters like Whitey Bulger, Vincent ‘Mad Dog’ Coll, George ‘Machine Gun’ Kelly and Owney ‘The Killer’ Madden.

“In different circumstances these men could have been captains of industry, politicians or union leaders,” John Joe said. “Instead they choose a path of crime that would make them into some of the most wanted men in America.

“Interestingly, loaners like Vincent Mad Dog Coll are rare in the annals of Irish American gangsters, who mostly achieved notoriety as part of the many gangs that sprung up almost from the first moments Irish emigrants came of the famine boats in New York or settled in Boston and Chicago. Gangs like the Gophers, The White Hand gang, the Northside gang, Winter Hill Gang and the Westies.

“No story of Irish-American gangsters would be complete without a look at each of these gangs who were the stepping-stone for so many in their rise in the world of crime.”

Irish Wise Guys is available to buy on www.irishwiseguys.ie priced €14.99 plus €5 postage worldwide. Four of those written about in the book will be featured in The Irish Voice over the coming months