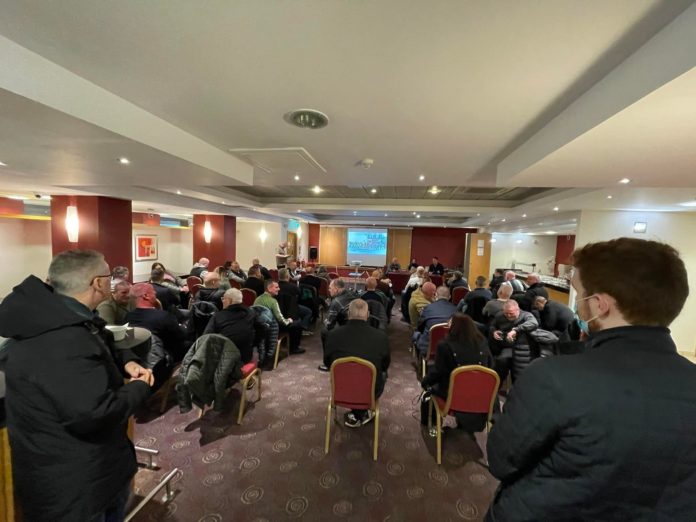 MEMBERS of the Glasgow Republicans were ‘humbled and honoured’ recently to attend the 50th anniversary
commemoration of Bloody Sunday—which took place on January 30, 1972—held by Cairde na hÉireann.

The core theme around this year’s remembrance was ‘One World, One Struggle’ so it was fitting that Amina Khaliq from the Scottish Palestinian Solidarity Campaign opened the speeches, given the similarities between the Irish struggle and that of the oppressed Palestinians against the Israeli regime.

Next to address the audience was North Belfast MP, Sinn Féin’s John Finucane. The Finucane family have suffered greatly over the decades, with John’s father Pat having been assassinated in 1989 by a Loyalist death squad in collusion with the British State, their fight for justice continues with the full solidarity of Cairde na hÉireann.

John spoke of the fact that at the core of Irish Republicanism is a very basic ethos to stand by those who are being served with injustices. He then quoted Martin Luther King when he said: “A threat to justice anywhere is a threat to justice everywhere.”

And finally, Paul Doherty provided those gathered with a powerful, emotional and very personal insight into the build up to Bloody Sunday, the tragic day itself and the aftermath and attempts at covering it up. Paul’s father Paddy Doherty was shot and killed from behind by Soldier F as he crawled away on the ground, attempting to escape the gunfire.

“It is only through education and solely political means that we will achieve the ultimate goal of a United Ireland,” a spokseperson for the Glasgow Republicans Cumann of Cairde na hÉireann added. “And by continually rededicating
ourselves to the struggles and quests for justice we hold dear, that cannot and will not be stopped.”