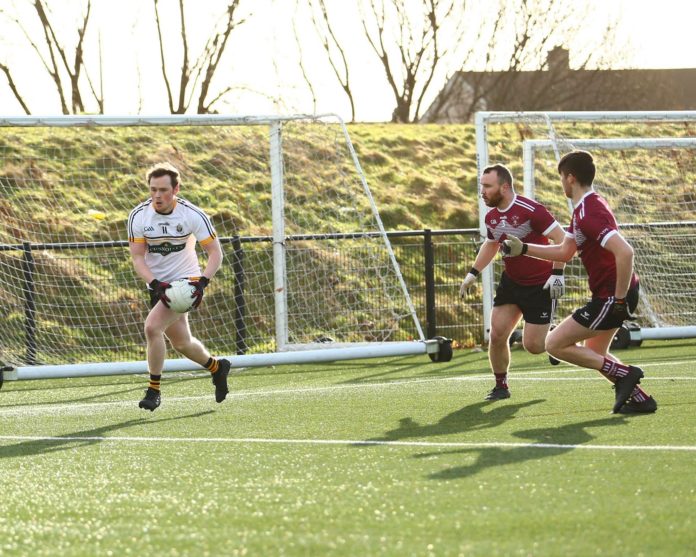 THE highly impressive Clydebank Community Sports Hub with its 4G floodlit GAA pitch was the venue for the Corn Na MacLeinn qualifier at the end of last month featuring the top four university teams in Britain in the current academic year.

Presiding over and chief organiser of the event was the very experienced British Provincial Council and Warwickshire stalwart, Karl McGuigan, ably assisted by the Scotland CDA Niall Considine.

Before the games commenced it was extremely fitting for this event to be marked with a minute’s silence to acknowledge the passing of an exemplary volunteer, Kieran Gleeson, who had dedicated many years of his life to supporting Gaelic games in Britain and whose adopted county was Lancashire, the county that encompasses Liverpool, the home territory for two of the day’s semi-final matches.

The first semi-final was between Glasgow University Michael O’Leary’s GAA Club and Liverpool Hope University (above), who in the recent past, had enjoyed significant success in terms of pre-pandemic British Championship and Corn Na MacLeinn titles. With Niall Mulvenna officiating the ball was thrown in at 12 noon during adverse weather conditions with gale force cross winds being far from ideal. Both teams, however, were undeterred and served up great football right from the outset. Hope’s first score was a well-worked goal that also demonstrated their sharpness in attack. Glasgow had a broad range of good individual talent, but did not perform as cohesively as a team and, in the end, Liverpool Hope won the game without needing to exert themselves and ran out winners by a scoreline of 2-11 to 1-5.

George O’Rourke took charge of the second game between the other Liverpool University side, Liverpool John Moores—current holders of both the British Universities Championship and Corn Na MacLeinn title—who took the field against the team that is traditionally the leading contender in Scotland Universities GAA, Robert Gordon University (RGU) in Aberdeen. These two teams mastered the blustery conditions and recorded early scores, including an excellently worked LJMU goal in the first quarter that gave them momentum. It looked like RGU had hauled themselves back into contention before half-time when they had the ball in the back of the net, but an earlier infringement meant this did not count. In the second-half the superiority of LJMU shone through with a tremendous display of long-range scoring that made a mockery of the very difficult conditions, and they progressed to the final on a score line of 3-11 to 0-4.

The final between the Liverpool rivals was played on the afternoon of January 30 with Ronan McCann appointed as the referee and in conditions that were not ideal in terms of wind and driving rain. However both teams still served up a tremendously entertaining hour of football that was very keenly contested in the first-half, but once again the superior fitness and tremendous talent in the LGMU forward line and the ability to take scores despite the blustery conditions was what was the difference between the two sides. The final score was LJMU 2-13 to Liverpool Hope 1-6.