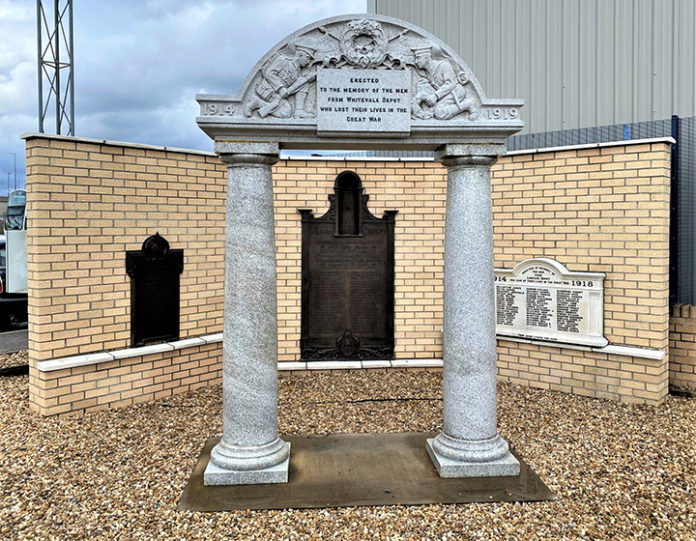 THREE war memorials, rescued from demolished Glasgow tram depots, have been saved by First Bus Glasgow and put on permanent show in a garden of remembrance at the company’s Caledonia Depot in Gorbals.

The memorials from the now-demolished Langside, Whitevale, Dennistoun and Newlands Depots, carry the names of 155 drivers and conductors who perished during World War I, the majority volunteering to serve in the 15th Highland Light Infantry Tramways Battalion.

But the memorials tell another story, for Irish names share space with those of native Scots, pointing to the fact that Glasgow Corporation Tramways, unlike so many employers of the day, did not discriminate against the Irish, Catholic community.

By contrast, a visit to the Caledonian Railway WWI memorial at Glasgow Central Station, shows that almost no Irish names are listed, and the same is equally true of the Glasgow & South Western Railway memorial at Ayr Station. Both companies were notorious for refusing to employ Irish, Catholic workers right up until they were merged in to the London Midland & Scottish Railway in 1923.

Glasgow Corporation Tramways always had a healthy relationship with the Irish community and it employed many Irish drivers and conductors in its horse tram operating days, from 1894 to 1902, as most of its tramway horses came from Ireland, and many Irish immigrants were used to handling horses. Many Donegal men and women worked on the trams, buses and trolleybuses during the 1950s wave of immigration into Glasgow, many staying on as long-service employees.

The restored memorials (above) can be viewed from outside the Caledonia Depot gates.