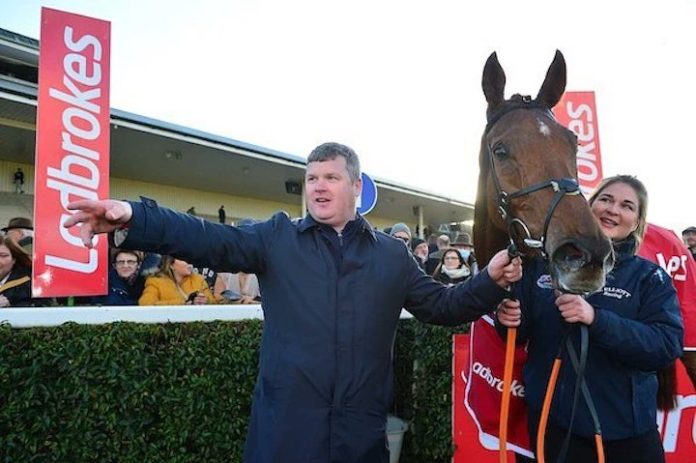 GORDON Elliott is definitely back! At his local meeting in Navan, he had seven winners and became the first trainer in Britain and Ireland to do so. The seven-timer eclipsed the record he shared with Paul Nichols and Willie Mullins. Nichols had achieved his six winners at Wincanton in 2006. Elliott recorded six winners in one meeting in Ireland on Troytown Chase Day in Navan in November 2016. Mullins achieved the record on the Wednesday of the Punchestown Festival in 2018.

Some trainers—including Martin Pipe—have had seven winners in one day at multiple meetings. The world record is held by Michael Dickenson with 12 winners at six meetings on December 27, 1982.

Elliot was quoted as saying: “It has been a great day with a lot of young horses and this is a product of rebuilding. We love coming to Navan. We’ve been very lucky here and I think it’s one of the best racecourses in the world, never mind Ireland, because the best horse usually wins and there are no excuses.”

The odds on the seven winners would have yielded an amazing £373,821. This was a great day for the Elliott stable and for all the staff and owners after its problems in the past few months. It couldn’t have been easy for the staff with the trainer out for six months, but they kept everything going and got their just rewards. So it’s onwards and upwards from here.

Mullins sent a mare called My Sister Sara over to Kempton for the Three Mile Racing TV Mares Hurdle at the end of November, which she won easily by seven lengths. She was ridden on the day Nico De Boinville, who spoke well of the mare. There is a Mares Hurdle at Leopardstown at Christmas, which she may run in. Hopefully she’ll win that and then it will be on to the Grade 1 Mares Hurdle at Cheltenham in 2022.

Another horse to look out for, Riviere D’Etel who won the recent Grade 2 Bet Victor Casino Novices Chase at Punchestown. Paddy Power cut her odds from 33/1 to 14/1 after the race for the Sporting Life Arkle at Cheltenham next year. “She’s very good and jumped well and could have won with 10lbs more,” trainer Gordon Elliott said.

Leopardstown was looking to welcome a crowd of 10,000 for the Christmas Festival Meeting, but that might not be possible due to fresh Covid-19 restrictions in Ireland. It seems they might be allowed a crowd of between 4000 and 6000 people. In 2019, the festival attracted 57,000 people over four days. How things have changed!