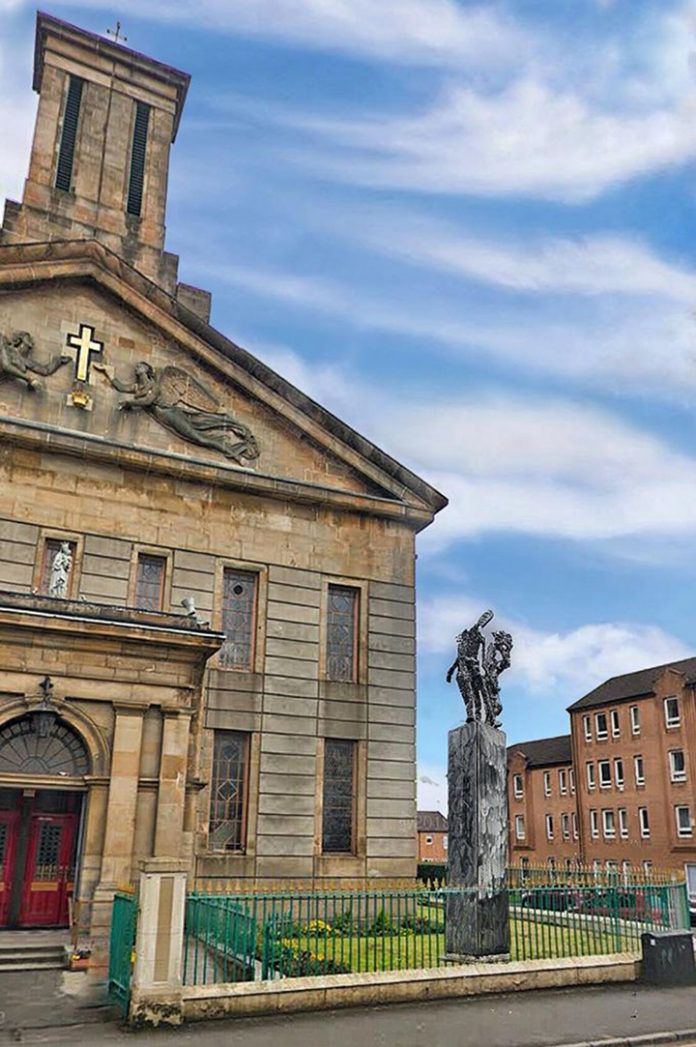 GLASGOW will welcome the long-awaited memorial to An Gorta Mór as it is unveiled at its site at St Mary’s, Abercromby Street this month (above).

The arrival of the monument marks the final triumph over a range of challenges as the Glasgow Irish community fought to commemorate the dreadful impact of the Great Hunger in Ireland and the thousands of Irish people who sought refuge in Glasgow as the tragedy unfolded.

They formed the first wave of Irish immigrants to Glasgow—who have been followed over the many decades since by many later waves—and are now remembered by the Irish community with a striking new structure which tells the story of the Great Hunger and the story of the descendants of those who made their way to Glasgow.

The Tower of Silence—Donegal artist John McCarron’s winning entry after submissions were made to the Coiste Cuimhneachain An Gorta Mór —will now be unveiled on Sunday July 25 after the final challenge has now been overcome.

After difficulties in procuring a site and guaranteeing permission for the memorial, the massive fundraising task saw more than £80,000 raised by the community. The challenges did not end there, however, as the initial unveiling of the memorial became a casualty of the coronavirus pandemic.

Following delays and cancellations as a result of restrictions on gathering in substantial numbers, the long-awaited conclusion the collective effort led by Coiste Cuimhneachain An Gorta Mór was pushed back.

Finally this month the Tower of Silence will witness the Irish community joining together to honour the Irish people affected by the Great Hunger and the lasting legacy their descendants have left for Glasgow.

A chance to remember
Speaking ahead of the unveiling, Jeanette Findlay Chair of Coiste Cuimhneachain An Gorta Mór, reflected on the opportunity the Irish community now has to remember their antecedents.

“Glasgow’s first permanent memorial to An Gorta Mór will be unveiled on Sunday July 25, 2021,” she said. “The sculpture, The Tower of Silence by John McCarron, will stand in the gardens of the church of St Mary’s in the Calton, which itself was built thanks to the generous donations of the Irish community.

“Having delayed the unveiling of the memorial to ensure members of the community could attend, we are making plans for an event to mark the unveiling in line with Level Two conditions in Glasgow. Although we will still be limited in the numbers who can attend, we look forward to marking this significant milestone with as many of you as possible.

“We’ll share details of how you can apply for tickets as soon as we can, and we’ll continue to update our plans if there are any changes to Level Two. Keep an eye on our website, Twitter and sign up for our email alerts. It’s only due to your support that the dead and displaced of An Gorta Mór will finally have a long-overdue memorial in the city where so many of their ancestors built a new home.”

Site, story and sculpture
The site is a fitting location given the importance it holds in the story of the Irish community in Scotland. With a large Irish community in the area since the time of the Great Hunger, it was in St Mary’s that so many Irish people found spiritual comfort, while many of the welfare initiatives which provided care for the Irish people of Glasgow were centred in the parish.

It was also in St Mary’s that the story of Celtic Football Club began, with Brother Walfrid convening the first meeting of the club in St Mary’s Hall. Given the historical significance of the site it was the natural choice for the committee looking to deliver the memorial, and artist John McCarron—working with sculptor Maurice Harron—designed a monument which charts the story of the Irish people at the same time as providing a striking memorial to their plight and the lives of their descendants.

“The Tower of Silence is the monument to the people who fled from Ireland to Glasgow in the 1840s,” he told Donegal Live. “It was made possible through the absolutely Trojan work of the Coiste Cuimhneachain An Gorta Mór in Glasgow, which raised the money and organised everything from the very early stages, including collections, everything that was needed from Glasgow City Council, everything that was needed from all parties.

“I would like to thank Jeanette Findlay, who is the Chair of Coiste Cuimhneachain An Gorta Mór, Glasgow, for her great work in bringing this project to fruition.

“I must also acknowledge the genius of renowned sculptor, Maurice Harron, in co-creating this sculpture. I am pleased that Maurice and his team will be credited with creating The Tower of Silence.

“I realised, as I got more and more involved with the project and visited Glasgow and spoke and listened to the people who took part in the public consultation, the Irish community in Glasgow and throughout Scotland, has a deep emotional investment in the Coiste Cuimhneachain An Gorta Mór project.”

Excitement
Now with the hard work completed, John McCarron is looking ahead to the unveiling, and spoke about the excitement everyone associated with the project is feeling.

“It is very exciting and I am really looking forward to the day of the unveiling,” he said. “Numbers, unfortunately, will be limited as Scotland is Level Two restrictions where only small gatherings are permitted by the authorities.

“The committee has allocated tickets for the event, so it promises to be a great day for the Irish people of Glasgow and the descendants of those who fled the terrible events of the 1840s in Ireland.”