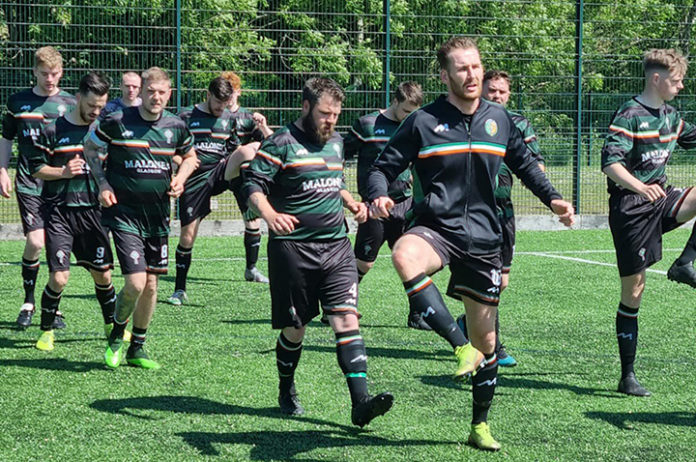 IT’S been a challenging start to the season for the Edinburgh Harps on the pitch, with the club struggling for a run of results.

The squad depth has been tested with player availability proving a difficulty throughout the holiday season.

Harps Club Captain Kurt Priestley enjoyed his recent wedding to wife Victoria and the club wish them every success as the start the next chapter of their lives together.

On the field, the captain contributed to a 3-0 win vs Musselburgh Windsor, which buoyed the team. Scorers that day were Ewan McLean, Angus Brock and Priestley who scored with a fantastic 30-yard lob.

In his marriage-enforced absence the club picked up a point against familiar foes Bank of Scotland as Danny Shekleton scored late on to rescue a draw after a frustrating display in front of goal from the Harps which should have saw them win comfortably.

Next up it was a 4-3 defeat to Blackridge courtesy of a last minute winner from the away side, which astonishingly came in the 15th minute of injury time. Club secretary Adam Kerlin’s goal was the pick of the bunch in that game.
In their most recent outing, a rearranged fixture against Central Scotland team Fallin AFC, the Harps raced into a two goal lead via two John McClarey penalties only to be eventually undone by the Stirling based side as they fell 5-2 in the end.

The Harps get back to league action against Corstorphine Dynamo next as they look to kick start their season.
In Glasgow meanwhile, Glasgow Irish (above) bid farewell to long-time manager Paul Mulgrew, who built such a strong foundation for the club in his time with the Irish.

In the first game for the Irish after the changing of the guard they took on a strong Clydebank Amateurs side, with their own recruitment efforts for the season still in progress. The pressure on the squad left them a bit light on the bench, but the Irish started well and scored through Tony Garth before Clydebank equalised. Tony Deveney put the Irish back in front before another equaliser levelled the scores at 2-2 at the half time break.

The second half was a different story, however, with four goals from Clydebank meeting with no reply as Glasgow Irish ran out of steam against a strong squad, losing 6-2.

While the strengthening of the squad did bear fruit, a number of players were unavailable for the match against top-of-the-table Coltness United, and the Irish were left wondering if a weakened match day squad would once again cost them as Coltness took an early lead.

An equaliser from Garth gave some hope for the Irish before a penalty restored the lead for Coltness before half time. The second half belonged to the Irish though, and three goals from Darren Young, with a free kick, Jay McCann and a second of the day for Garth gave them a deserved 4-2 victory.

A defeat in the next match against Fernhill saw the Irish lose 3-1 in an out of character performance, with a bright sign for the future coming from striker Mark Leckenby, who scored on his debut.

“For the Irish it was a very eventful September but with new management and a new direction for the club to go,” the club said. “The Irish performances are showing they are a very good team and can compete with anyone on their day.”