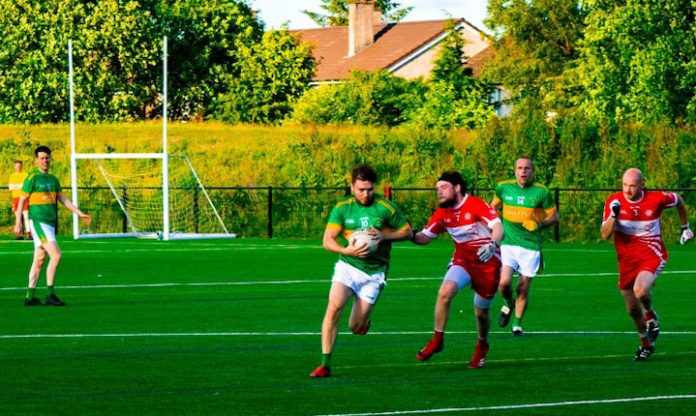 After a tight 3-07 to 2-07 win over an improving Coatbridge side, Harps emerged victorious against city rivals Glasgow Gaels in a game where they knew a win would all but seal their place in the Junior League Final.

Tír Conaill started the game in a determined manner and got off the mark with a fine point from Aaron Taggart in the fourth minute. Despite having a few chances in front of the posts early on, they couldn’t convert and Gaels took full advantage by kicking a score to level the game in the eighth minute. Harps were soon in front again though, after a score from youngster Ethan Friel and after that, Harps wouldn’t surrender that lead for the remainder of the match.

Harps’ Paul Molloy converted a free half-way through the first half to edge the team further in front. Then, on the half hour mark Glasgow Gaels had a free awarded to them allowing them a route back into the game, but the high ball into the square was calmly fisted away by keeper Dara Cahill. Shortly afterwards, the ball fell into the hands of Kieran Turner who went on a fantastic run to kick a delightful ball over to add another score to the scoreboard.

With half time approaching, Molloy converted another free to end the scoring in the first half, meaning that Tír Conaill led by a score of 0-7 to 0-01 at half time.

Harps weathered an early second half Gaels storm—clearing a goal bound shot off the line—but did eventually concede a goal a long ball floated, which looped over Cahill and found its way into the back of the net.

Tír Conaill fought their way back into the game and points from Taggart, Molloy and another excellent point from Kieran Turner all but cemented the points for the Harps. Shaun Callaghan popped up with his first point of the match, and Ethan Friel added to his tally with two late points to add a glossy finish to the scoreline. In the final minute, Gaels where converted a free, making the final score Tír Conaill Harps 0-13, Glasgow Gaels’ 1-03.

Man of the match Rory McIntyre worked tirelessly in the middle of the field to help setup some beautiful scores, however a Harps spokesperson noted that ‘every single player to a man can be exceptionally proud in what was an excellent team performance.’

On a side note, Tír Conaill Harps wished to place on record their thanks and best wishes to Eamonn Cookie who will be heading home for pastures new.

“Eamonn has been a vital part of the success for the Harps in the last few years both on the pitch and behind the scenes,” a spokesperson said. “From taking charge at training sessions to his calm and confident presence in the green and gold on the pitch, he will be a huge miss to Tír Conaill Harps. Everyone at the club wishes Eamonn every success for the future.”

The game itself was very tight with both teams taking their chances in front of goal. In a game that could have went either way both teams would have been reasonably happy to take a share of the points with the game ending in a draw, Dalriada 2-03, Tír Conaill Harps 1-06.

Harps then had a derby game against Glasgow Gaels. The Harps went into this game looking to build on the draw from Aberdeen. Unfortunately, it turned out mainly a night to forget for Tír Conaill who lost by a scoreline of 1-13 to 0-09.

In their next fixture against Dunedin Connollys, on a wet and blustery July afternoon, Harps knew it was a must win game for them if the harboured any real ambition to finish in the top two and reach the Senior League Final. However much like the weather the result and performance were somewhat underwhelming.

After a blistering start to the match by the Edinburgh side, Tír Conaill were chasing their tail somewhat and after 10 minutes trailed 2-03 to 0-01. The teams then traded points until half-time with the scoreline reading 2-05 to 0-03.

Harps started brightly in the second half scoring three points early on and Aiden Brennan has a golden opportunity in front of goal to bring Harps right back into the game, but unfortunately, he sent the ball narrowly wide. This was as good as it got for Tír Conaill though as Connollys scored three unanswered points between the 45th and 47th minute mark. Daniel Gallagher converted a point halfway through the second half and Muiris Bartley managed to get on the scoresheet with the last score of the game. The game ended Dunedin Connollys 2-14, Tír Conaill Harps 0-08 and Harps will now seek to secure a place in the Intermediate League Final.

“The boys will have been bitterly disappointed with the result and performance, but this is a team that pushed all the way for the title before the season was cut short last year,” a spokesperson said. “They will endeavour to put this bad start behind them and push on to recapture their form from last year, and if they manage to meet their potential success will be sure to follow.”